A frustrating search for children’s books depicting India’s rich heritage has given an enterprising young Indian mother in Boston the impetus to launch her own series of such books. 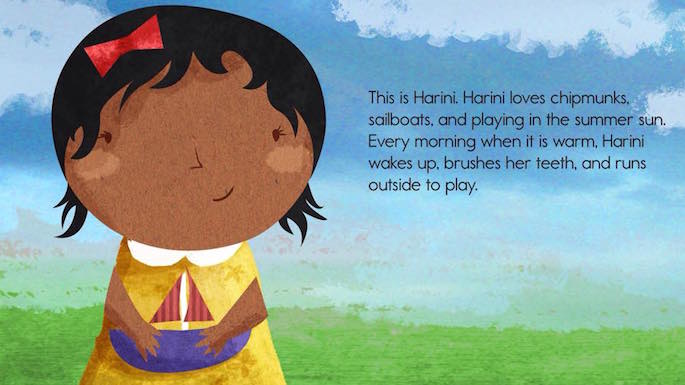 A frustrating search for children’s books depicting India’s rich heritage has given an enterprising young Indian mother in Boston the impetus to launch her own series of such books.

Sailaja Joshi says her goal in launching “Bharat Babies” is to publish “developmentally and culturally appropriate” books on Indian culture and religion for young children. She recalls her mother reading her such books when she was young, and hopes to recreate the same connection to Indian culture for young children today through her line of books.

The first such book, “Hanuman and the Orange Sun”, will be released in May.

When she first set out to find books about Indian culture that she could share with her newborn daughter, Joshi said she realized there were very few of them available. Of the books that were available, many were not appropriate for her daughter’s developmental needs, she said.

“They could not hold the attention of two-, three-, or four-year-olds. And some were Anglicized stories that were simply inaccurate,” said Joshi.

Realizing this big gap in children’s literature, she says, the idea for Bharat Babies was born.

“My husband and I are both academics and love books, and so we knew that Indian heritage books would be important for our child, Joshi told The Indian Diaspora.

The main character of her first book is a little girl named Harini with brown skin and black hair who is hearing the stories of “Hanuman Dada” from her mother for the very first time as they work together to make a meal.

Joshi said the books are written to appeal to children of Indian American parents, so the characters, like Harini eat both Indian and American food and speak a mixture of their own native language and English. It was important to her that children could see themselves in the books they read and identify with them, she said.

The company has plans to launch a Kickstarter like campaign to raise funds for its other literary projects this year.

“For example, the Bharat Babies website will have a blurb about a book online, with some cover art and ask for funding through a pre-order campaign, which helps pay for the cost of printing the book,” Joshi said.

Joshi got a tremendous response for her first book. She said she reached her goal for raising money for “Hanuman” in four days. She said the company is looking for “brick and mortar partners” to sell her books.

Joshi said she did marketing research before she started her company and realized that there was a big need for Indian heritage books in the country. As a sociologist and anthropologist by training, she said she “knew the numbers behind the Indian-American community” and that they were a large affluent group with young kids.

Joshi said her parents emigrated from Andhra Pradesh in the 1980s and settled south of Boston, where she was born.

Joshi said her original intention was to make sure that teachers had the critical teaching tools necessary for an increasingly diverse classroom. Teachers could use the books as part of their plan to teach folklore or religion, or for reading comprehension exercises, she said.

She spoke to educators in Boston and New York City about diversifying the types of books available in the classroom. Her company will soon reach out to other school districts to see how its books can be used in schools for the upcoming school year, Joshi said.

Other books that will be released over the next few years will focus on Indian history, holidays, and religions such as Jainism, Sikhism, Islam and Buddhism. Next year, she plans to do a biographical series on Gandhi, and famous Indian women.

Joshi has two authors on her staffs that write the books. Their ideas come from members of the Indian community who provide background for them to construct their stories. In addition to the authors, the staffs consist of illustrators, a cultural advisor, and a creative and marketing director.

The company has three product lines, each targeted for specific age groups. Level 1 books are for babies 0-24 months old, have prominent illustrations, and are made of tough cardboard. Level 2 books are for children 24 months to five years old with more complex language and stories. The level 3 books are for age five and above, and are focused on developing critical language skills by using the first 100-200 words a child learns in school.

Vandana Mathur is the US representative of The Indian Diaspora. She can be contacted at: vmathur@american.edu