The Metropolitan Museum of Art in New York will this spring hold an exhibition of Deccani art. 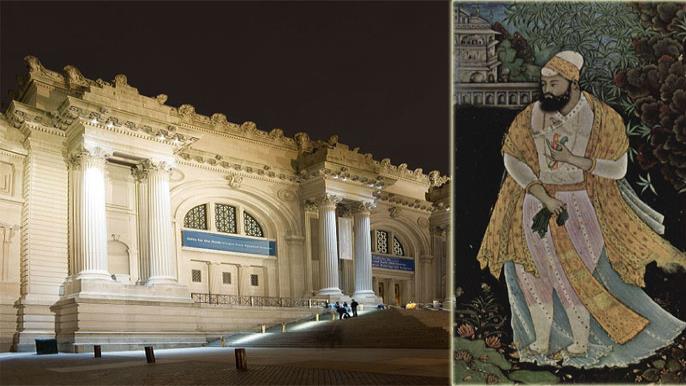 The Metropolitan Museum of Art in New York will this spring hold an exhibition of Deccani art. Navina Haidar, who is curating the exhibition titled ‘Sultans of Deccan’s India (1500-1700): Opulence and Fantasy’, said it would bring together “exciting” art works and artifacts of the Deccani period from about 70 lenders, museums, private and royal collections from around the world.

Haidar is the curator of the much-acclaimed new gallery of Islamic Art at the Metropolitan Museum. The Met, as it is popularly known, opened its ‘New Gallery for the Art of the Arab lands, Turkey, Iran, Central Asia and Later South Asia’ in late 2011 to display its renowned collection of Islamic art. More than two million people have visited the gallery since it opened — a testimony to the kind of appeal it has had.

The exhibition on the art of the Deccan will be held from April 20 to July 26, 2015. The Deccan region was home to a rich artistic heritage under the Sultans. The Sultans were great patrons of art and their courts attracted artists from foreign lands. A distinctive art and culture thrived in the 16th and 17th century and showed foreign influences from Iran, Central Asia, Turkey, East Africa and Europe in the traditional Indian art. The exhibition will focus chiefly on the courtly art of the kingdoms of Bijapur, Ahmadnagar, Bidar and Golconda.

The golden age of Bijapur was under the rule of Sultan Ibrahim Adil Shah ll (1580-1627). A contemporary of Emperor Akbar, Adil Shah loved music and art. He was a dhrupad singer and played the veena. He wrote the Kitab-e-Nauras, one of the first books on music; it starts with a prayer to Goddess Saraswati and has 59 dhrupads with eight songs in praise of Saraswati, Shiva and Ganapati.

According to Haidar, one of the highlights of the exhibition would be three or four by a famous Iranian artist, Farooq Hussain, who was a fascinating figure in history. He was born in Iran, went to Kabul and then reached the Deccan. He came to the Deccan as did so many Iranians in the 17th century because there were great cultural links between the two countries and Indian courts were very receptive to the best artists of the time.

“There was a moment in Farooq Hussain’s artistic career when his imagination was freed in a way; it just happened in the Deccan. His vision of the forests of the Deccan, the trees, the birds, landscape is incredible: that is something unique. So we will have three incredible masterpieces by Farooq Hussain in the exhibition,” explained Haidar.

“One painting is in the Welsh collection in America, a picture of two elephants,” she said. “No Indian or Persian artist painted elephants in that way. It was Farooq in the Deccan who understood the animals and their relationship. The other is in Prague which shows Ibrahim Adil Shah playing his favorite instrument. From that painting we understood that Ibrahim Adil Shah was probably left-handed. A Sultan playing an instrument is a very rare sight. Now he is holding it in the wrong way, playing it with the wrong hand, singing about a Hindu Goddess, Saraswati — the whole thing is just a bit too much. But Farooq painted it as he saw it.”

From India, there are six pages of the Kitab-i-Nauras. “Unfortunately you can’t see them very well. It’s hard to light them. Presenting these things is very difficult. But these are very important pages,” said Haidar.

Explaining the connections in the art world, Haidar said that there is reason to believe that the Dutch painter, Vermeer, might have painted a Deccan carpet in one of his painting. The exhibition will also have bidri metalwork objects from the kingdom of Bidar, magnificent gems from international royal collections, the large painted kalamkaris, and royal objects made of inlaid and gilded metal, precious jewels and carved wood.

London-born Haidar said she loved lines and had done a lot of sketching as a child. When she was about 18 years of age, a family friend suggested she study art and so she became an art historian. Haidar’s family moved back to India when she was just a few months old. She had her schooling in India and also lived in Afghanistan, Bhutan and New York as the family moved with her diplomat father to different capitals. She studied Indian painting at Oxford University and has been a curator at The Met for over 14 years.