Holi Celebrations in Full Swing in the US Through May

Holi celebrations are in full swing in the United States, in major cities and across several college campuses, drawing thousands of Indians and non-Indians to celebrate the coming of spring. 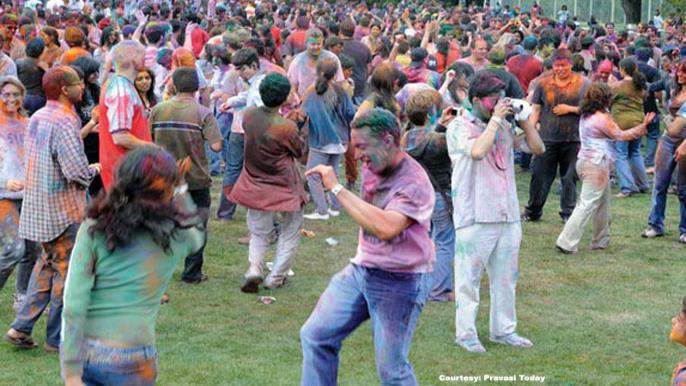 Holi celebrations are in full swing in the United States, in major cities and across several college campuses, drawing thousands of Indians and non-Indians to celebrate the coming of spring.

Although it has retained the traditional aspects of the holiday, the diaspora community has also added its unique blend of music, food, dancing, parades, floats, and Bollywood stars to the celebration. While India celebrates Holi March 6, the festival is celebrated in the United States anytime between early March to May.

“The idea is not just to play Holi, but to bring people from different cultures under one roof, to energize and bring color into our lives,“ said Manish Sood of Intense Entertainment LLC, who is organizing the “Festival of Colors and Kites” March 28 in Bull Run Park in Centreville, Virginia.

“People are buying tickets like crazy,” he said. The theme of the festival is, “No color, no caste, no creed, no religion. Come join a step toward humanity. United we stand,” Sood said.

The festival will feature performances by various local Indian dance troupes, an Indian rock and roll band composed of 5-12-year olds, as well as Chinese, Indian, and American food. Thandai and beer will also be served.

Sood said people will not be allowed to bring colors to the festival, but can purchase the non-toxic powder approved by the U.S. Food and Drug Administration at the festival.

On the West coast, about 3,000 people are expected to attend the Holi festival March 14 in Milpitas, Santa Clara County, California, organized by the Rajasthan Association of North America. A “Holi Hungama” is scheduled for March 15 in Los Angeles by the Festival of India Association and is billed as the “biggest outdoor party of Los Angeles.” The event promises “colors, live music, and DJ, as well as Indian foods such as chole bhature, idli dosa and Tandoori chicken.

One of the largest Holi festivals, which attracts about 50,000 people, is held in Spanish Fork, Utah. Organized by the Sri Radha Krishna Temple, the “Festival of Colors” draws mostly non-Indians.

Caru Das, the temple’s priest, said attendance has skyrocketed since it first started about 25 years ago.

With the rise in popularity, the temple now organizes Holi events in Las Vegas, Idaho, Arizona, and several cities in California, including Los Angeles, San Bernardino, and Sacramento, to name a few. The festival is also held in several cities in Utah.

Caru Das said the festival is a combination of music, dance, food, and yoga classes. The festivals blend Eastern and Western cultures, he said.

For safety reasons, people are not allowed to bring their own color powder and can only use what is provided by the temple staff. There are strict instructions for throwing color at the festival to avoid eye injuries.

One of the largest Holi festivals on the East Coast is organized by the Hindu Parade and Festivals Committee (HPFC) in Richmond Hill, Queens, in New York City. The Indo-Caribbean festival organizes the “Phagwa” parade, as well as music and other cultural performances. It drew a whopping 100,000 people in 2013, among them state and city politicians and other dignitaries.

But its fate this year is uncertain because of a pending court case filed with the Supreme Court of Queens County in New York against the HPFC committee by a former head of the committee. The fight over election procedures has hampered this year’s plans.

But people in New York looking to celebrate Holi have several other festival options. The annual Festival of Colors will be held May 9 in Brooklyn, N.Y., and promises “DJ’s, bands, delicious foods, and great people.” The New York City Bhangra Dance Company is planning the sixth annual, day-long “Holi Hai” celebration May 2 to celebrate “the coming of spring, the joy of friendship and equality for all.” And the annual Holi One festival is planning another big event this year in New York.

(Vandana Mathur is the US representative of The Indian Diaspora. She can be contacted at vmathur@american.edu)