Indo-Canada Chamber of Commerce (ICCC), in partnership with the City of Brampton and the City of Markham, organized a roundtable discussion on ‘Promoting Canada-India Bilateral Trade and Investment” with a visiting international business delegation from Gujarat. 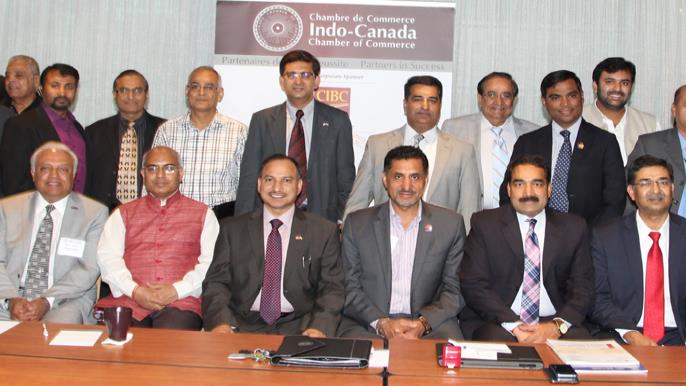 Toronto–Indo-Canada Chamber of Commerce (ICCC), in partnership with the City of Brampton and the City of Markham, organized a roundtable discussion on ‘Promoting Canada-India Bilateral Trade and Investment” with a visiting international business delegation from Gujarat. Also Read - Schools Reopening From Monday | What Back to Classes Might Look Like Amid Pandemic

The emphasis of the discussion between the two sides was on the forthcoming biannual event ‘Vibrant Gujarat’, which ICCC President Dharma Jain said assumes added significance next year. “Three events would be happening in January 2015: the Pravasi Bhartiya Divas will mark 100 years of Gandhiji’s return from South Africa;  PBD itself will be held in Gujarat, Prime Minister Modi is from Gujarat and there will be Vibrant Gujarat – all these from January 6 to 14,” he told The Indian Diaspora over phone. Also Read - COVID-19: With Spike of Over 96,000 Cases, India's Tally Crosses 52-Lakh Mark, Deaths Near 85K

Canada and India must “join hands in developing the trade and businesses. Political leadership in both countries is committed and the Canadian participation in India based activities witnessed the seriousness of our government take the bilateral relations at a new level,” he said.

In January, ICCC took a 200-member business delegation to several cities in India. Coming January, they are hoping to take a much larger delegation, said Jain, who was the keynote speaker at the business roundtable.

“As the largest organization of the Indian Diaspora in Canada, we are constantly consulted by both the governments on important policy matters pertaining to bilateral trade, immigration and fiscal matters,” he said.

Indian delegation was led by Bharat Lal of the Gujarat government. He extended an invitation to all participants of the business forum to the Vibrant Gujarat. “It is an opportunity which should not be missed if one wishes to do business with India. All the stakeholders in businesses, government and decision makers will be there for interaction with the visiting business people.”

From the Canadian side participants also included Federal Minister of Sports Bal Gosal. “India is important for Canada for businesses,” he said adding that Canada is looking to visit India in the coming time for further strengthening the trade ties.

“The bilateral relations between Canada and India accelerated in the last decade and will grow rapidly in the next decade,” the ICCC President said. “Canadian leadership is committed and working hard for bilateral engagements with India politically, economically, socially, academically and culturally.”