The Indian American community is swiftly and aggressively responding to a brutal Feb. 6 police attack of Sureshbhai Patel in Madison, Ala., that left Patel partially paralyzed and the India community outraged. 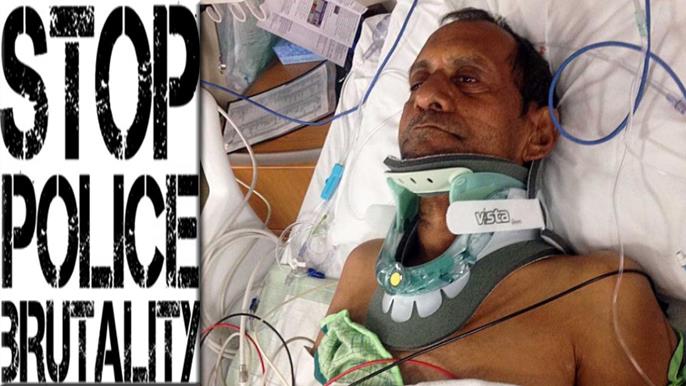 Also Read - Unarmed Black man Dies of Suffocation After New York Police Pin Him Down, Put a Spit Hood on His Head

The Indian American community is swiftly and aggressively responding to a brutal Feb. 6  police attack of Sureshbhai Patel in Madison, Ala., that left Patel partially paralyzed and the India community outraged.

Community leaders are reaching out to help Patel and his family, while also calling on the police to take actions against the officers involved in the incident and take steps to prevent any such future attacks.

A GoFundMe Campaign, with a goal of raising $100,000, is under way after being launched by a concerned community member with approval from the victim’s lawyer and son. The funds will help the family cover the mounting costs for hospitalization and other therapies. So far, the campaign has exceeded its goal, raising $115,000.

The 57-year-old grandfather, who came to Madison, Ala., to help his son and his daughter-in-law care for their child, has been left partially paralyzed after the attack. The police officer has been charged with assault, and the FBI is investigating the incident as a possible civil rights violation.

Patel was confronted by police after someone in the housing community where his son lives called police to report “a suspicious” man walking through the neighborhood. One of the officers reportedly slammed Patel to the ground, leaving him partially paralyzed.

“This attack on an individual who had committed no crime is unfortunately consistent with the continued pattern of aggression shown by police officers in the Tamar Rice and the Eric Garner cases,” noted Samir Kalra, HAF’s senior director for Human Rights.

“While the Madison police department acted appropriately in suspending the officer involved, it still faces serious questions about how this tragedy could have occurred.”

Both instances mentioned by Kalra involved police actions that lead to the death of those two African American men, which has set off a wave of protests.

“We hope that the Madison police department will use the resources at its disposal to ensure that their officers respond appropriately and measuredly to all incidents, regardless of the background of the persons involved,” Voruganti said in a statement.

HAF is working with the Department of Justice to develop a “Hinduism 101” training for first responders. The training is intended to improve “the cultural competency of police officers and avoid the escalation of incidents based on language and cultural barriers,” according to HAF. The group has also developed a similar training for

In addition, AshaKiran, a local advocacy and outreach organization for South Asians in Madison, intends to hold cultural training workshops with the Madison police.

In a statement, the group said, “AshaKiran has received many calls from concerned citizens and anger over this incident is understandable. However, as a community in a  global world, we want to make sure that we are concentrating on taking positive steps forward that we, at AshaKiran know is possible through constructive dialogue and the awareness of the many cultural nuances found right here in our community.”