Komagata Maru Memorial located near the steps of the Seawall in Coal Harbour Vancouver is sadly not an impressive monument, at least not to me. 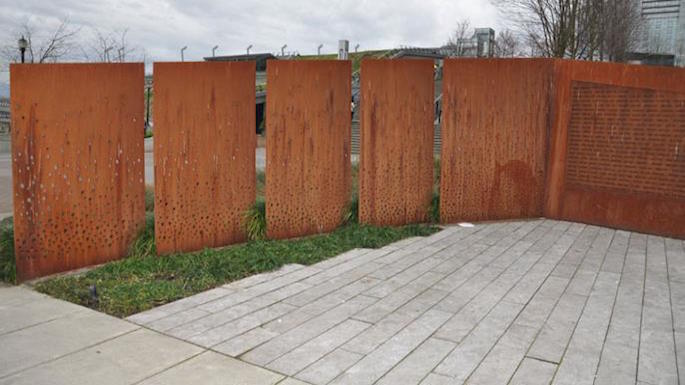 Komagata Maru Memorial located near the steps of the Seawall in Coal Harbour Vancouver is sadly not an impressive monument, at least not to me.

It was erected in May 2012. I visited the memorial for the first time on March 28, 2015. From the Pan Pacific Hotel (Vancouver Convention Centre), where I was staying, it is five-minute walk. While we (my wife Rosalinda was with me) were walking by the side of the Harbour, we almost missed the Memorial. I repeat to us the Memorial is not impressive. To me it doesn’t depict the 1914 tragedy appropriately.

The place surrounding the memorial is poorly maintained by the Vancouver Board of Parks and Recreation.  The grass was not mowed, the plants were not trimmed, not cut, there were puddles and the part of the memorial, where names of all the 376 passengers are written (of these 340 were Sikhs, 24 Muslims and 12 were Hindus), was covered with birds’ stuff.

I was deeply disappointed to see its state as if the Vancouver Board of Parks and Recreations doesn’t care. It seems to me even the Khalsa Diwan Society in Vancouver is not paying enough attention to ensure the memorial is maintained properly. After all, they donated the memorial with the Federal Government writing a check for $82,500.

Dr. Ratna Ghosh from McGill University in Montreal, who was vice-chair of the three-man committee for the ‘Community Historical Recognition Program,’ appointed by then Citizenship and Immigration Minister Jason Kenney, that recommended the program, told me from Paris (she’s currently there for a scholarly assignment)

“I am really sorry to hear this. The upkeep of the Memorial was left to the Vancouver City and local person (businessman Jack Uppal) was going to see to that…”

Unlike the Air India Memorial in Toronto, where names of all 329 victims are engraved on granite, names of the Komagata Maru passengers are written on a huge iron sheet that’s rusted and despite all my efforts I could hardly read those names. The Memorial comprises of six metal sheets and together the memorial is called the replica of the Komagata Maru ship that brought the 376 people into the Vancouver Harbour after seven weeks of voyage and there the vessel stayed for two months and then forced to return to India.

The memorial, funded by the Citizenship and Immigration Canada, which was unveiled in 2012, also has a framed photograph of group of passengers aboard the ship, with prominent picture of Gurdit Singh, businessman from Singapore, who chartered the ship. His main objective was to challenge  the Continuous Journey Act, that provided that passengers must travel from their country of origin to Canada without any stop over on their way, which was next to impossible 100 years back as any vessel needed to be refueled and restocked with supplies.

By the side of the photo of the group of passengers, most of them wearing turbans tell the story of the Komagata Maru as to how it came from Hong Kong via Japan, after a seven-week voyage, into the Vancouver’s Coal Harbour on May 23, 1914. Of 376, 24 passengers were allowed to disembark and other 352 were forced to return to India.

There’s still racism in Canada or else how does one explain that this memorial has been defaced twice. First time it was in December 2013, when someone was photographed urinating there and the second time was when Vancouver’s  Parks and Recreation Board discovered a graffiti painted on the memorial a few days before the centenary of the Komagata Maru tragedy May last year. It was, of course, cleaned after three days and in the process names of some passengers were also removed. I understand those names have now been restored.

Dr. Ratna Ghosh believes “the maintenance is needed in everything, even when names are engraved in granite as in the case of the Air India Memorial in Toronto.” That maintenance is the responsibility of the Vancouver City and the Khalsa Diwan Society is supposed to ensure the City does its job suitably.

(Ajit Jain is the Canada Editor of The Indian Diaspora. He can be contacted at ajit.jain0410@gmail.com)