Maryland Legislator Kumar P. Barve to Run for Congress in 2016

Kumar P. Barve, the first Indian American to be elected to a state legislature in the US way back in 1990, now plans to run for the US House of Representatives in 2016. 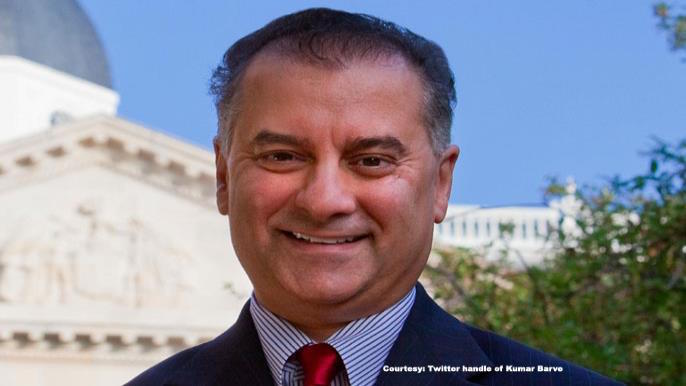 Kumar P. Barve, the first Indian American to be elected to a state legislature in the US way back in 1990, now plans to run for the US House of Representatives in 2016. If elected, he would be the fourth Indian American member of the US House after Dalip Singh Saund, Bobby Jindal, current Louisiana governor, and Ami Bera, who is serving his second term in the House. Also Read - India ad spend to grow by 12.5% in 2018: Report

Barve, who has been a member of the Maryland House of Delegates for 24 years, announced his plans to run for the US House seat being vacated by fellow Democrat Chris Van Hollen earlier this week, according to the Washington Post.

“I am ready to take my experience working for economic growth and fighting for our middle class to the federal level,” Barve said in an e-mail to supporters.

“This isn’t going to be easy. Offering bold and innovative proposals to rebuild our middle class and grow our economy never is.”

Although a number of prominent Democrats have expressed interest in Van Hollen’s seat, Barve is the first to formally announce that he will run, the Post said.

Barve, 56, was the chamber’s majority leader from 2003 until earlier this year. He now chairs the House Environment and Transportation Committee.

Barve’s legislative work has focused largely on health care and the promotion of the high-tech industry in Maryland. He sponsored both the 1995 Health Access Act and legislation that created the Technology Development Corporation of Maryland.

Barve is an accountant and the chief financial officer at Environmental Management Services Inc., an environmental and hazardous waste remediation company.

Barve will likely face competition for the seat from a number of other Democrats, according to the Post, with several others considering a run.