Ed Fast, Canada’s International Trade Minister, believes Prime Minister Narendra Modi’s upcoming official visit to his country indicates that there is “real commitment” on the part of the new government in Delhi on taking relations between the two nations to a “whole new level.” 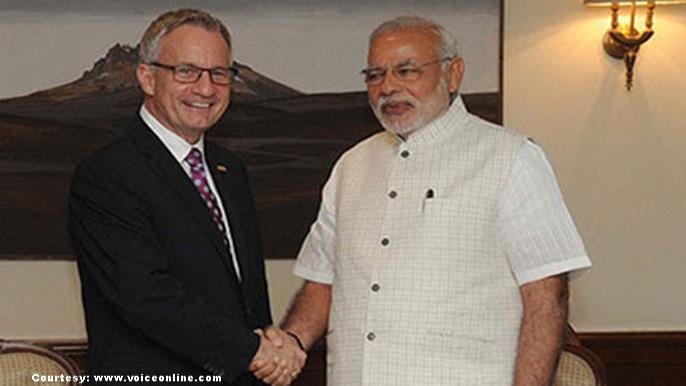 Toronto— Ed Fast, Canada’s International Trade Minister, believes Prime Minister Narendra Modi’s upcoming official visit to his country indicates that there is “real commitment” on the part of the new government in Delhi on taking relations between the two nations to a “whole new level.”

Fast, who met Modi in New Delhi last October and was again in India recently, described his impending arrival in Ottawa as the first “dedicated visit” by any Indian prime minister to Canada since 1973.

“I think it indicates real commitment on the part of Prime Minister Modi to warm relations between Canada and India, driving (it) to a whole new level,” Fast told The Indian Diaspora in an exclusive phone interview April 1.

He added that, in Canada “we have a large Indian Diaspora that’s very open to…deepening our trade and investment relations with India.”

“This is the time for Prime Minister (Stephen) Harper and Prime Minister Modi to discuss issues such as science and technology and education, trade and security and all those kind of issues,” Fast said.

Stating that he expected the visit to be “productive”, Minister Fast said it would also be extensive as Modi is not merely “coming to Ottawa, our capital city, but he’s going to Toronto and traveling all the way to Vancouver, which indicates to me that he is very keen about our bilateral relationship”.

On his recent visit to New Delhi, Fast said: “I was able to meet with Finance Minister (Arun) Jaitley and my Indian counterpart Nirmala Sitharaman. We talked about opportunities to deepen our trade, deepen our investment and partnership. We also talked about (how an) Indian Prime minister hasn’t visited Canada for quite some time. We are very much looking forward to Prime Minister Modi’s visit (so that he could discuss) trade, investment, security issues with our prime minister.”

Fast said both Indian ministers “acknowledged there was a unique opportunity for our two countries to lift our bilateral relations to a whole new level because there’s so much potential because the Indian marketplace is huge with 1.2 to 1.3 billion people. Canada has a very small population, but we are rich in natural resources and human resources and technology. We are truly natural partners. Prime Minister Modi has recognized that. We have recognized that.”

The Canadian minister’s recent visit to India was part of Round Nine of the talks on the Comprehensive Economic Partnership Agreement (CEPA) and this round took place after almost two years.

On whether there were issues holding up the finalization of the CEPA, Minister Fast said “there are always small issues to resolve between our two countries, but none is a huge issue.”

He pointed out that Canada now has eight trade offices (located in New Delhi, Chandigarh, Ahmedabad, Bangalore, Mumbai, etc.) in India which are being manned by close to 50 trade commissioners who are helping Canadian companies to invest in India.

“Some of the areas where there are growing opportunities include agro-food, where we have the technology, food storage, cold storage. We are world leaders in this technology… What we need to do is to have  the right framework agreement (and to) really push our relationship at a different level,” he said.

(Ajit Jain is canada Editor of the Indian Diaspora. He can be reached at ajit.jain0410@gmail.com)