There were 200 guests, many of them Indo-Canadian women, women who are successful in their respective professions but there were some who are victims of violence. 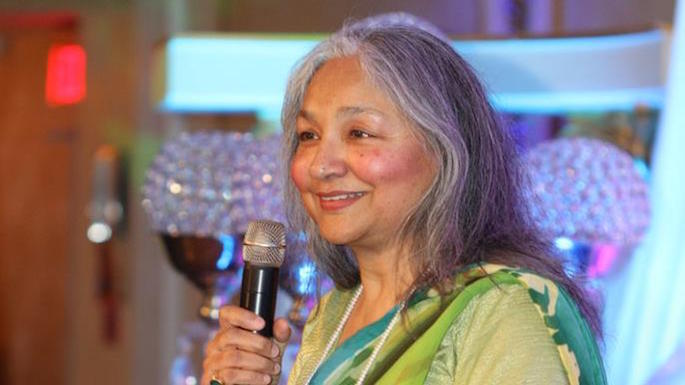 There were 200 guests, many of them Indo-Canadian women, women who are successful in their respective professions but there were some who are victims of violence.

The third annual Peacock Ball, held in Toronto on March 13, was organized by Ellsworth Heyworth Center for Women under leadership of Indo-Canadian activist Sunder Singh. She was pleased that from one evening they were able to raise $35,000, the money that will be used “to help women, victims of domestic violence, to lead a meaningful and dignified life by helping them find gainful employment.”

They spoke about how more and more women have now progressed in their respective professions, result of years and years of their struggle.

I was amongst the keynote speakers. I cited examples of a number of successful women, like Indira Noyii, an Indian American who came to New York several years back after her MBA from South of India when she was not offered even an entry level position.

The same sari-clad shy woman is now heading the Pepsi Cola empire and she is amongst 100 most successful women globally. German Chancellor Angela Merkel is now leader of Europe in whose good books even Russian President Vladimir Putin wants to be. And who knows next occupant of the Oval Office next year would be another woman Hillary Rodham Clinton. And at the Queen’s Park in Toronto sits the first woman Premier of Ontario Kathlyn Wynne.

There are stories like the one 23-year-old Indian medical student who was raped by six men in a moving bus in December 2012 that made the headlines and continues to engage attention of the world. That tragedy created a misperception in many, many countries that violence against women is India-specific. That’s far from true. Violence against women is a global phenomenon.

Every day and in all parts of the world, innocent women and girls are raped, tortured, physically assaulted, financially and emotionally exploited and harassed by their spouses or their intimate partners. It is not something that is confined to India or the South Asian sub-continent.

The last two annual UN reports have revealed that 35 percent of women globally have at least once in their life time experienced physical or sexual violence and in many cases both. So that we understand it in prosper perspective, UN is talking about 1 billion women who have suffered some form of violence in their life time.

Canadian women are not immune from violence at the hands of their partners. Official statistics reveal that every 16 minutes one woman is assaulted; every six days one woman is killed. In 2009, 67 Canadian women were murdered by their intimate partners. And sadly only half a percent of those who assault and abuse women are finally convicted by the Canadian courts: What a dismal number for a developed country like Canada.

In a recent report, the New York Times wrote that women are being abused in poor and rich countries alike, they are abused in countries at war, and countries where peace prevails.

In her opening remarks, Sunder Singh, Executive Director of ECHW, cited  several examples of women victims, including one where her husband  forced his wife  to stay outside the house all night in freezing cold, with their two-day-old  baby, as she gave birth to a  female. The man wanted to have a son.

In another case the husband poured boiling water on his wife as she resisted being part of all illicit drugs that he was using, with his friends, and he wanted her to be part.

My appeal to women is: Please don’t allow anyone to abuse you not even once. If you think, as many women do, ‘Oh it is the first time and it won’t happen again,’ such women are under an illusion. It will happen the second time, third time and the tenth time and if you don’t take action, and it will increase in its frequency and intensity.

Ajit Jain is Canada Editor of the Indian Diaspora. He can be reached at ajit.jain0410@gmail.com)