Prime Minister Narendra Modi’s ambitious plan to create 100 “smart cities” in India was high on the agenda of University of Toronto’s President, Prof. Meric Gertler, on his recent visit to India. 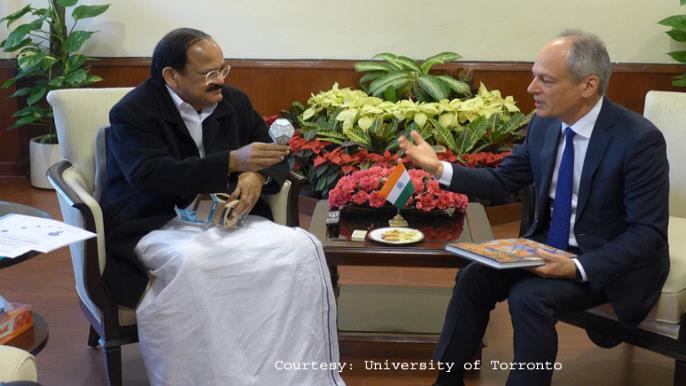 Prime Minister Narendra Modi’s ambitious plan to create 100 “smart cities” in India was high on the agenda of University of Toronto’s President, Prof. Meric Gertler, on his recent visit to India.

For Prof. Gertler, who specializes in urban development, one of the key meetings during the visit was with Minister of Urban Development and Urban Poverty Alleviation M. Venkaiah Naidu.

“I am very impressed with this idea of smart cities. I extended an invitation to the Urban Development Minister to visit our University and meet with our experts, our urban planners,” Prof. Gertler said in an interview to The Indian Diaspora.

During his four-day visit to Mumbai and New Delhi, Prof. Gertler was accompanied with a 12-member delegation that included Indo-Canadian Kasi Rao, Vice-President of Asia Pacific Foundation, a pre-eminent think tank.

In Mumbai he co-hosted a workshop with IIT Bombay on ‘Universities in Urbanization: Building Healthy, Sustainable and Innovative Cities’, and in New Delhi he gave the inaugural address on cities for the Asia Pacific Foundation’s joint lecture series with the Federation of Indian Chambers of Commerce and Industry (FICCI).

“Our discussion (at IIT Bombay) was around the theme of building healthy, sustainable and smart cities and also to explore opportunities for future joint research projects, other partnership activities,” Prof. Gertler said.

“I think Prime Minister Modi’s decision to spearhead the development through the idea of smart cities is breathtaking and it is inspiring. Many people are trying to figure how it will happen, what does a smart city mean? I think there are new technologies to improve the well-being of the masses, not just the elites, and mobile technology, in particular, having the potential to deliver services to a very large (number of) people in India.”

Prof.  Gertler describes smart cities as the ones that use “data to track people’s travel in cities and use that kind of information in real time to calibrate traffic signals and improve traffic flows.

“And in another sense smart cities (are) places with faster innovative ideas. Smart cities in that way highlight both the universities and research institutions must join hands in the future development of Indian cities.

“So the message I was bringing really, suggesting in my speeches, was as India thinks about how to re-engineer its urban development, it should also be coordinating to develop its higher education and research systems.

“That message was quite well received,” Dr. Gertler stated.