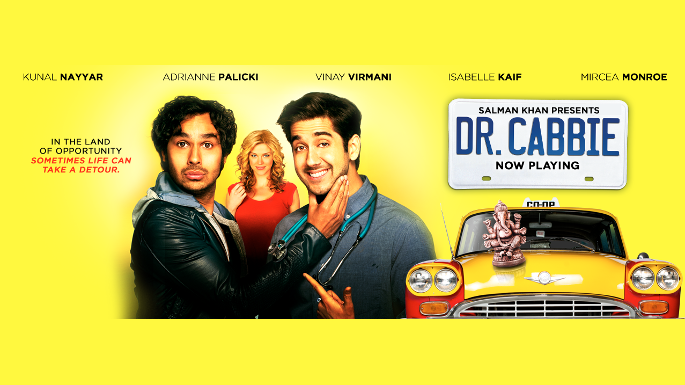 Toronto: Dr. Cabbie, starring Vinay Virmani, Kunal Nayyar. Directed by Jean-Francois Pouliot, released this week is getting some high praise from Canadian media. Also Read - Independence Day 2020: In a First, Indian Flag to be Hoisted at the Iconic Niagara Falls on August 15

The Toronto Star reviewer writes: Dr. Cabbie does something interesting. It takes a rather serious subject ‚Äî the fact that immigrants bring vital skills to Canada that are cruelly wasted ‚Äî and milks the issue for its comic possibilities. It does so in a cheeky and charming way and, although Dr. Cabbie is clunky in places, it mostly works.” Also Read - 'Horror Show': 38 Puppies Found Dead On a Cargo Plane Flying From Ukraine to Canada, Investigation Underway

Much credit resides with the star, Vinay Virmani, who came up with the story and co-wrote the screenplay. Also Read - Sushant Singh Rajput And Rumoured GF Rhea Chakraborty Were Going to Feature in Their First Film Together?

The Sun, though not as impressed, still noted: “A better-looking movie than Breakaway, Dr. Cabbie is lovingly shot by director Jean-Francois Pouliot (Le Grande Seduction), both in Toronto and in India where the movie begins. We see an idealistic young doctor with the name Deepak Chopra (no relation), played by Virmani, cheerfully taking his Hippocratic Oath, saying goodbye to his mom (Lillete Dubey) and packing his bags for Canada. There he plans to crash with his rich, restaurateur Uncle Vijay and his New Agey trophy wife Rani (Mircea Monroe).”

The Link in Vancouver wrote: “Kunal Nayyar of Big Bang Theory shines in a flashy comic but thoroughly lovable role and Vinay Virmani also bounces back from the terrible Breakaway thanks to a tight script and good direction by a French Canadian director Jean-Francois Pouliot. This is the film that South Asian cinema in Canada needs to go towards after the boring films of Deepa Mehta!”