The first four stations of the Mississauga Transitway were officially opened by all three levels of government at a ceremony at the new Dixie Station this week. 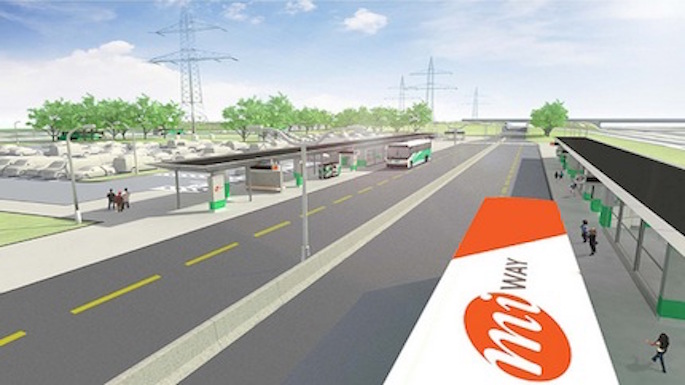 Mississauga— The first four stations of the Mississauga Transitway were officially opened by all three levels of government at a ceremony at the new Dixie Station this week. This dedicated corridor is the first of its kind in the Greater Toronto Area and will make east-west travel across the city more efficient. Also Read - 11 Essentials Every Daily Commuter Must Have

To celebrate the opening of Phase One of the transitway, which includes Central Parkway, Cawthra, Tomken and Dixie stations, Mayor Hazel McCallion and Members of Council were joined by Bal Gosal, Minister of State (Sport) and Member of Parliament for Bramalea-Gore-Malton; Steven Del Duca, Minister of Transportation; and Bruce McCuaig, President and CEO of Metrolinx. Also Read - Union Pearson Train Service to Start Spring 2015

“Today we are bringing rapid transit to the people,” said Mayor McCallion. “The Mississauga Transitway will help reduce congestion in our city. It shows what progress can be made when all levels of government work together. I hope co-operative efforts to improve transportation continue for many years to come.”

“Our government’s support for public infrastructure has never been stronger. We are pleased to invest in this important project that supports efficient, environmentally-sustainable transportation and provides commuters in Mississauga with a more efficient transit option, while cutting commute times and taking more cars off the road,” said Minister Gosal.

“This is an important project that is contributing to the growth and development within the City of Mississauga and will benefit the local economy for generations. The new transitway will help ease congestion, and commuters will have a better way to get around the city. This project is proof of our government’s commitment to making the daily commute and quality of life better for Ontario families,” said Minister Del Duca.

“Metrolinx is proud to work alongside the City of Mississauga and the federal and provincial governments to bring convenient and integrated transit to Mississauga,” said Mr. McCuaig. “This dedicated bus corridor is just one of the many projects Metrolinx is delivering across the Greater Toronto and Hamilton Area to make transit faster and easier.”

Mississauga is responsible for Phase 1 of the project. Four remaining east segment stations are under construction by the City of Mississauga including Tahoe, Etobicoke Creek, Spectrum and Orbitor. These stations are expected to open in 2016 along with the west segment from Winston Churchill Boulevard to Erin Mills Parkway which is being constructed by Metrolinx. The contract to build Renforth, the final station in the east segment, has also been approved and Metrolinx will begin building it soon.

When the entire 18-kilometer transitway is complete in 2017 there will be 12 stations, including renovations to the existing hub in the city core with new bus shelters at MiWay’s City Centre Transit Terminal in 2014, and a new station building at GO Transit’s Square One Bus Terminal by the end of 2015. The transitway will begin at Winston Churchill Boulevard in the west and end at Renforth Drive in the east. MiWay will begin service on Phase 1 on Monday, November 17; GO Transit will also provide service on the transitway when fully complete. The transitway will provide a convenient and efficient bus corridor for GO and MiWay routes to travel across the city.

The Mississauga Transitway project is funded through a joint a partnership between three levels of government: