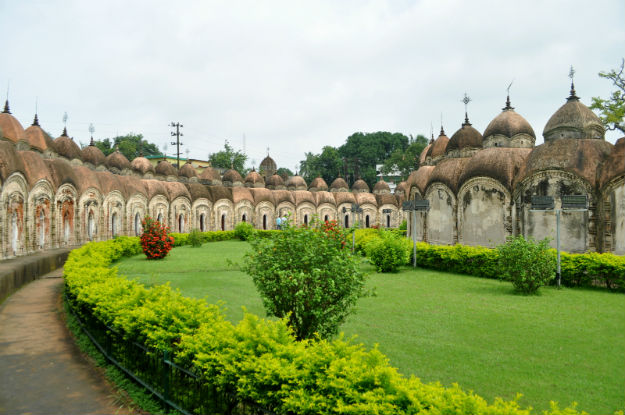 Located on the banks of Bhagirathi river in Bardhaman district, the town also known as Kalna is named after Goddess Kali. The first reference to Ambika Kalna is found in a 6th century text when it was an important center for maritime trade. However, the town truly attained glory under the Maharajas of Bardhaman in the 18th century. During this period, the Bardhaman rulers built several temples with detailed terracotta ornamentation. ALSO SEE 11 places to visit near Kolkata after Durga Ashtami

The most eye-catching landmark in Kalna is the 108 Shiva temple complex. Maharaja Tejachandra oversaw the construction of the temples to celebrate the transfer of ownership of the Bishnupur royal estate. The temples showcase fabulous terracotta sculptures. Episodes from the Ramayana and the Mahabharata, erotica and hunting scenes are depicted on the walls.

Kalna is an important production center of textiles and saris. It also has several rice mills and is a major center for rice trade.

There are many budget hotels and dharmashalas in the town. You could also also consider staying at the PWD guest house but it is advisable to book your room in advance.

There are several restaurants in Ambika Kalna which serve your typical Indian fare and a few popular Chinese dishes.


Place to visit in AMBIKA KALNA

All Temples
View all places to visit in AMBIKA KALNA