Here are some unique pics of Pyongyangon, the national capital of North Korea.

North Korea is one of the toughest countries to travel to. Not only does the government control most of the tourist activities, but it’s almost impossible to travel around the country without a designated tour guide accompanying you at all times. So much so that your bedtime and your wake up call timings are also decided by your guide. Though only about 1500 westerners visit North Korea each year,  a much larger number of Asians visit the country, especially people of Chinese nationality. Some influential Chinese people are not allowed to wander around without being accompanied by guides. Recently, Michal Huniewicz, a photographer from London visited the North Korean capital, Pyongyangon. Not only did he manage to click a bunch of extremely descriptive photographs but he also managed to smuggle them out of the country. Now there are chances that these pictures may look nothing but ordinary at the first glance, but you’ll  soon realize why they’re scandalous after all! Also Read - BFI Nominates 5 Boxers And three coaches For The National Sports Awards 2020

1. Over the river Yalu, to the left is North Korea and to the right is China. Also Read - India-China Ladakh Standoff: 'Situation Stable And Controllable, All Channels Open For Talks,' Says Beijing 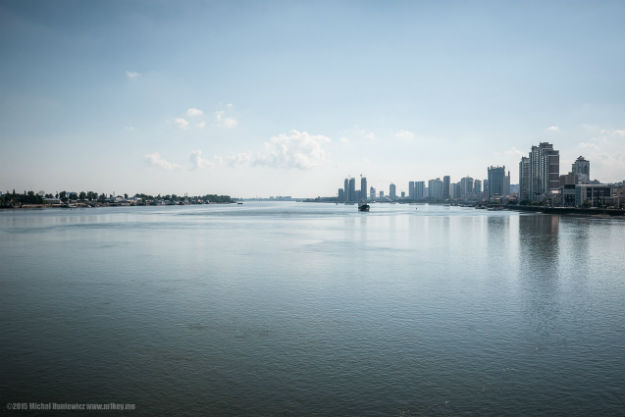 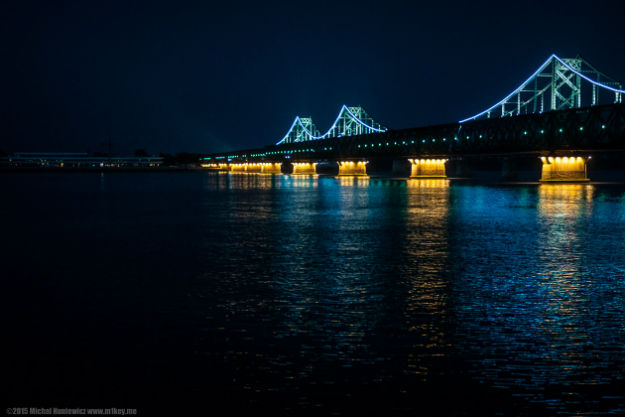 3. The Broken Bridge over the Yalu river was destroyed by the Americans and once you board the train, it’ll travel over to North Korea via the new bridge 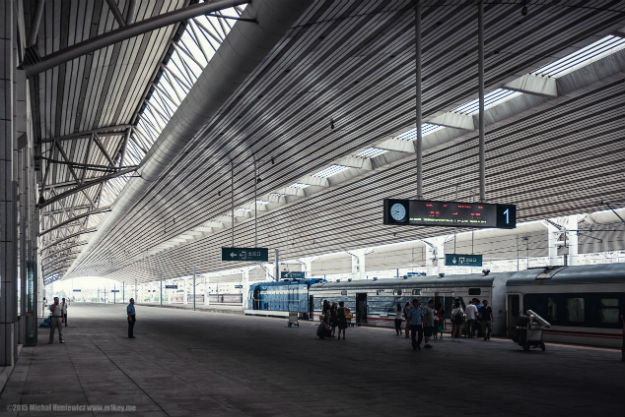 4. After getting done with a lot of paper work, Michal clicked his first photograph in North Korea from the train. He says, it reminds him of East Europe from the late 80s. 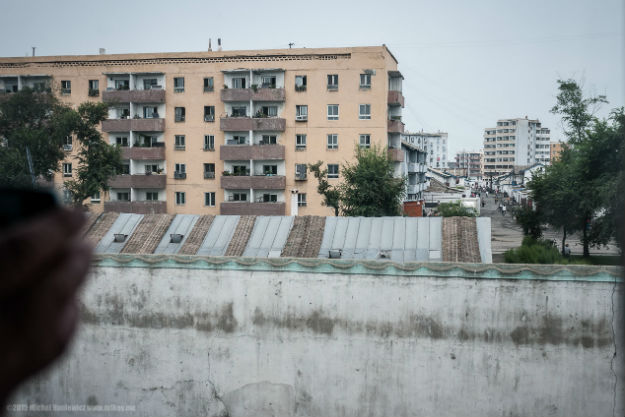 4. The photographer emphasises on how in North Korea one can have feelings of love only towards the supreme leader. In fact, a song called mother unfolds into words which mean that a mother’s love is nothing compared to the love of the communist party! 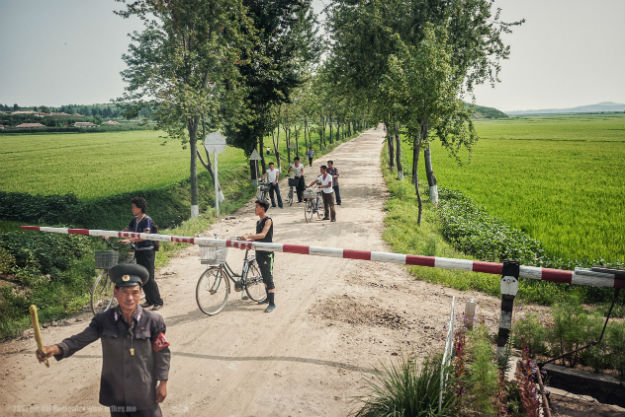 5. This photograph is from when the train arrived at the station. Michal points out how all the people on the platform were actually going nowhere! The train that had just arrived was the only train of day. These well-dressed people were there only to make the platform not look deserted. 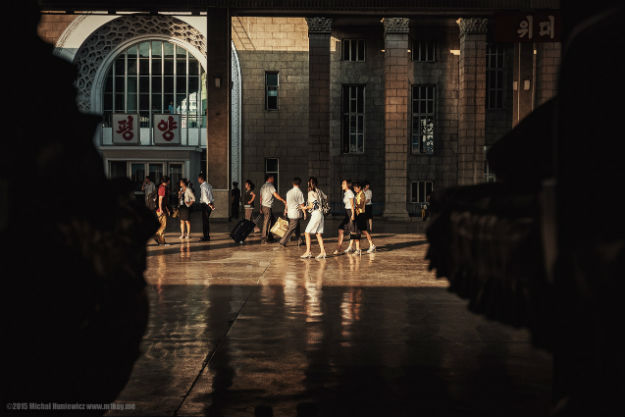 6. Once all travelers got out of the station at Pyongyangon, they met designated guides and were hardly allowed to walk anywhere. The taxi was the only way they could get anywhere in the city and the only place most other photographs are shot from. 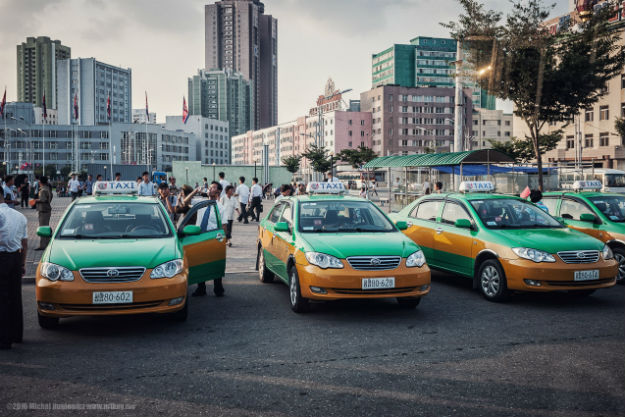 7. This is the view of the city from the Yanggakdo Hotel where all the non-Chinese tourists stay. The only distance one can walk around is five meters from the entrance to the parking lot! 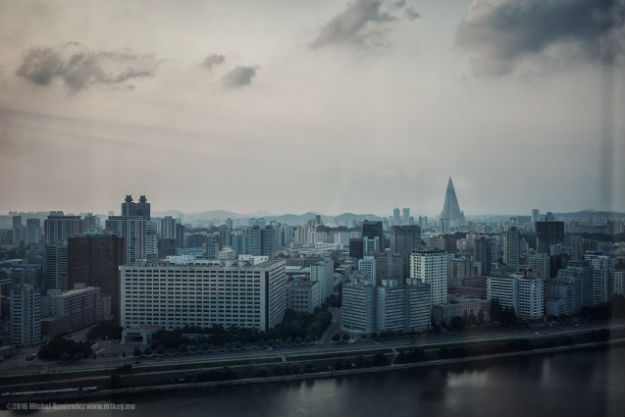 8. A rumor about the missing fifth floor is that it’s dedicated to keep a close eye on all tourists staying in the hotel. Some guests have apparently taken the stairs to discover the place. 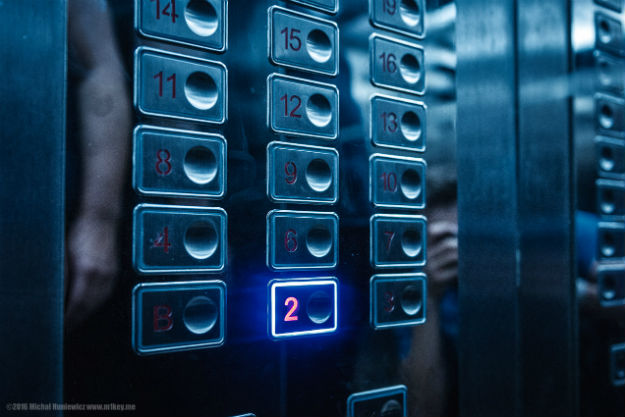 9. Waiters and servers often kept their distance and looked terrified of  the guests. In fact, while dining at this restaurant, the photographer wondered if the place was bugged! 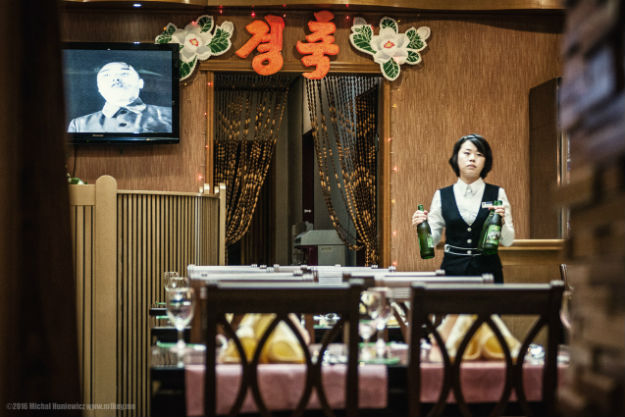 10. The Kim Il-sung Square is home to the Grand People’s Study House, it is one of the only libraries in the city that has some international books. 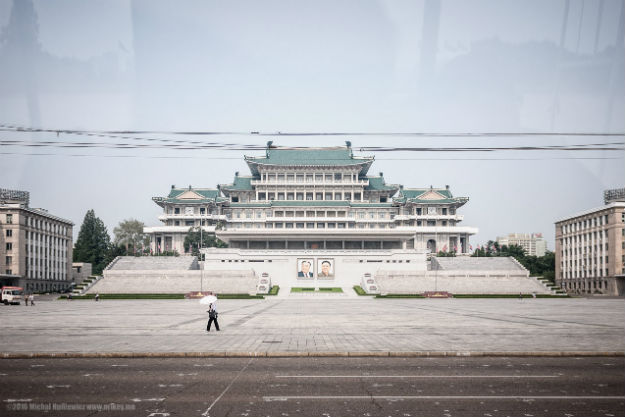 11. The little red badges worn by most of these people is something given to everyone who is obedient, mind you, it cannot be bought from anywhere! 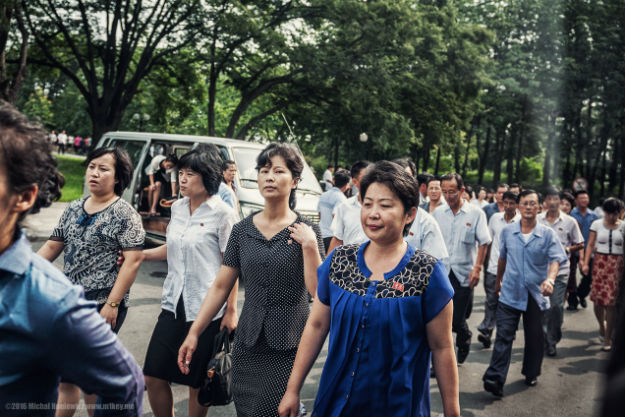 12. Though the photographer says he didn’t want to take flowers, his guys made him pay for these, the next photograph will tell you why! 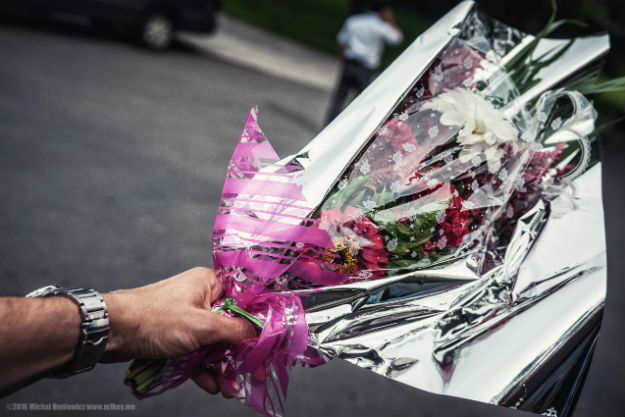 13. This is the Mansu Hill Grand Monument and people visit it in large numbers, bow down to both these leaders and offer flowers too. It is illegal to take photographs of these statues if both the leaders are not fully in the frame. Just when Michal learned that… 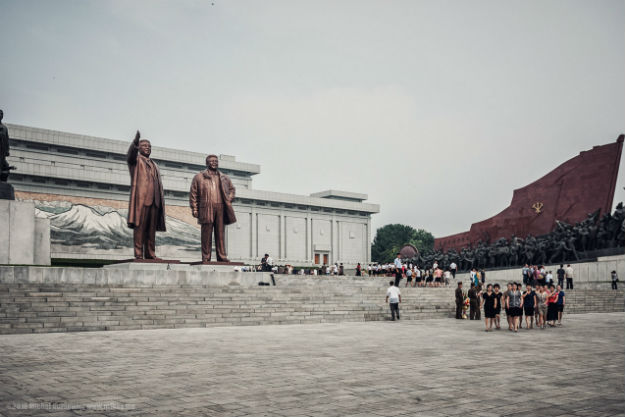 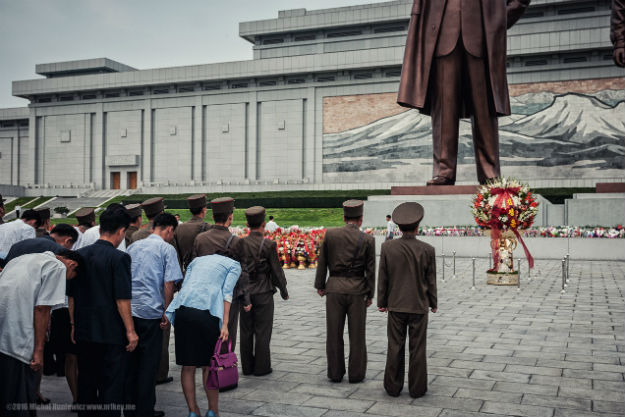 15. One of the statues on the left show a North Korean soldier stamping an American Flag. 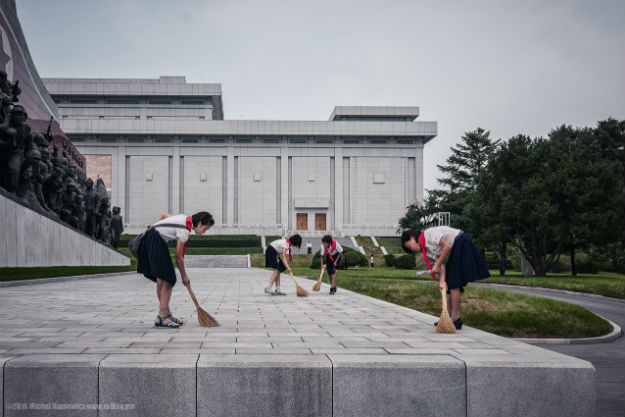 16. Tourists are not allowed to enter most public places meant for locals. There are designated guides for each group, while each of them is at the head and tail of the group, Michal grabbed this opportunity and clicked this picture when both the guides were away, for just a matter of 10 seconds. 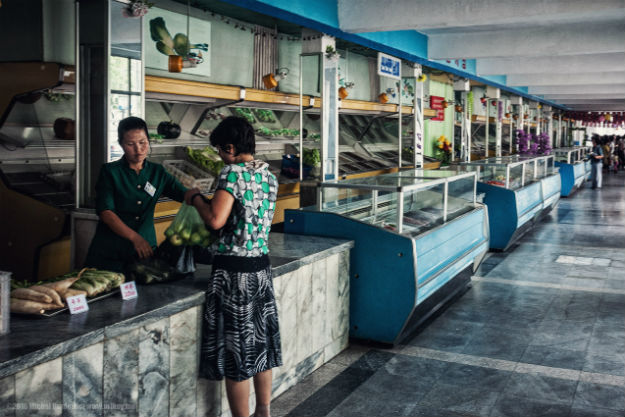 17. This is more or less everything souvenir shops has, Kim Jong-il’s encyclopaedias, postcards and posters among other merchandise. 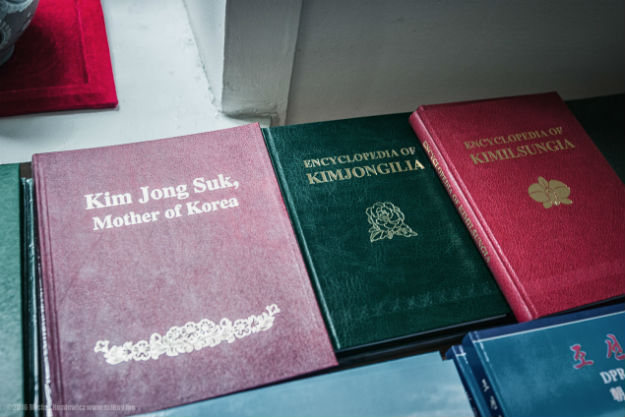 18. This picture shows how clean the city really is and how little traffic there is. Also, in case you get involved in car accidents, hospitals usually don’t offer help! 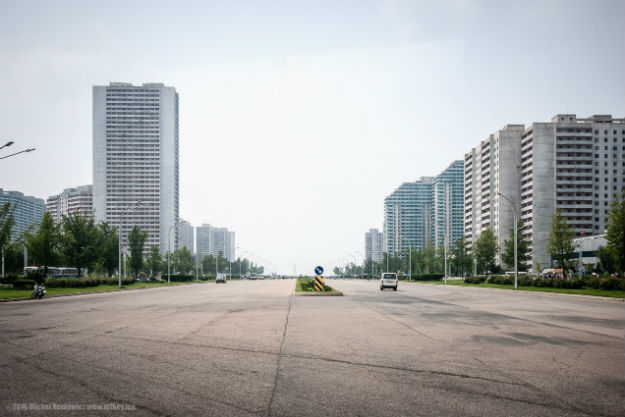 19. Workers carrying something across the bridge also looked extremely disciplined. 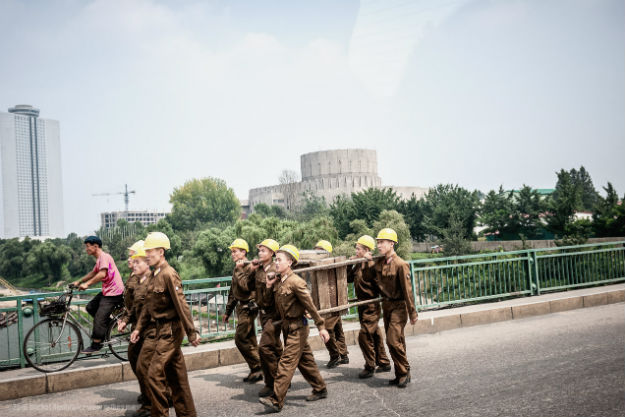 20. Often the taxi drivers would speed through places that didn’t look too appealing while they’d slow down as soon as they’d locate a place that looks nice enough for the tourists to see. This is one of the places the group got taken to very often. 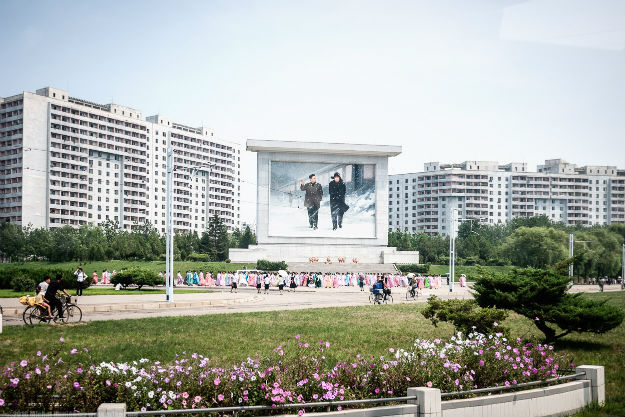 21. And lastly, the photographer leaves us with this photograph as a failed attempt at emphasizing on the cleanliness and elegance of the city. 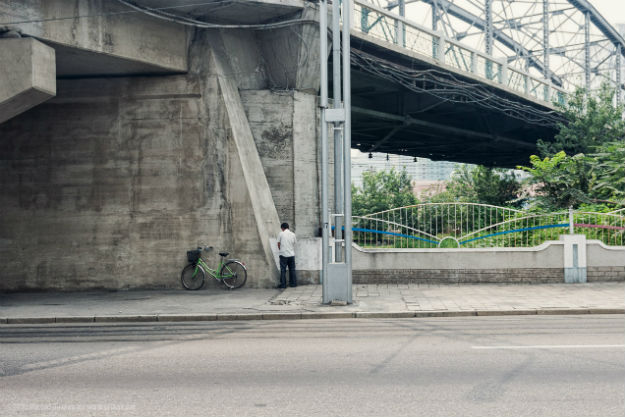 Do let us know what your opinion about these pictures of North Korea is, at travel@corp.india.com!