The tomb, which belongs to an ancient priestess, dates back to the Fifth Dynasty of the Old Kingdom of Egypt. 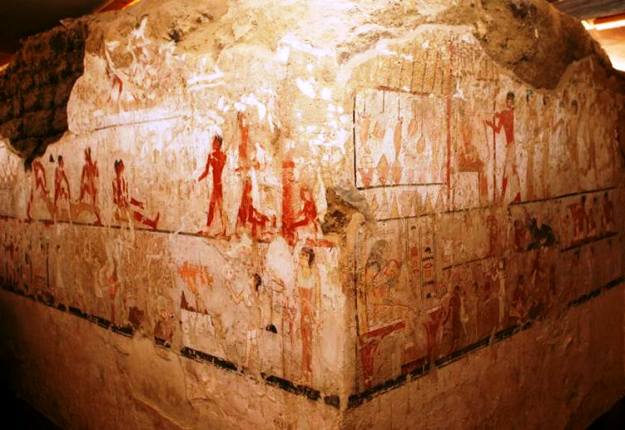 The towering pyramids and temples and the tombs buried in the sands of Egypt are a reminder of the country’s incredible history. Millennia ago, one of the oldest human civilizations rose and thrived along the Nile. And even today, archeologists are discovering fascinating things hidden away in the valleys of Egypt. Case in point: a newly-discovered tomb of a powerful ancient priestess from the Fifth Dynasty of the Old Kingdom (2465-2323 BCE). ALSO READ: An Ancient Egyptian Temple from the Era of Ramses II has been Found near Cairo Also Read - Exclusive: On Swara Bhasker's Birthday, Director Ashwiny Iyer Tiwari Talks About Her 'Gutsy' Friend

The Ministry of Antiquities of Egypt announced the discovered some days ago, saying that the tomb is full of exceptionally well-preserved paintings and hieroglyphs. Archeologists discovered the ancient tomb during excavations of the western cemetery in Giza, and the Ministry says that it dates back to 4,400 years. The tomb holds the remains of Hetpet, a priestess to the goddess of fertility, Hathor, in the religion of the ancient Egyptian empire that once ruled from Al Qahira, the City Victorious now called Cairo. Also Read - 'Extend Lockdown Period Till April 30 to Contain COVID-19,' CAIT Writes to Centre

As a priestess, Hetpet would have helped women in childbirth and served a major role in the royal palace during her time, which would have been sometime during the end of the Fifth Dynasty. The Ministry of Antiquities, in its announcement on Facebook, said, “The tomb has very distinguished wall paintings in a very good conservation condition depicting Hetpet standing in different hunting and fishing scenes or sitting before a large offering table receiving offerings from her children.” Also Read - Dream11 Team Prediction Managua vs Deportivo Ocotal Nicaragua League 2020: Captain, Vice-Captain And Football Tips For MNG vs OCO Today's Match at Estadio Nacional de Futbol 4AM IST

The walls of the tomb has more images of dance and music performances, and pictures of metal and leather workers from the era. There are even two scenes of domesticated monkeys, a common sight at the time. The first monkey is shown reaping fruits, and the second one is shown dancing to an orchestra. The tomb of Ka-Iber of the Old Kingdom in Saqqara and that of Khnoum Hetep II of the 12th Dynasty in Beni Hassan also feature monkeys in their artwork. NOW READ: Two Ancient Tombs Discovered in Luxor, Egypt

The western cemetery was discovered all the way back in 1842, but it wasn’t until recently that this tomb was revealed. Hetpet, meanwhile, is a known personality. Back in 1909, German archeologists found antiquities that carried her name, or that of a woman with the same name as her. The collection of antiquities now lie in the Berlin Museum.