A Frenchman has just set a new record for longest hoverboard flight!

Entrepreneur Franky Zapata travels 7,388 feet on a hoverboard to break the record. 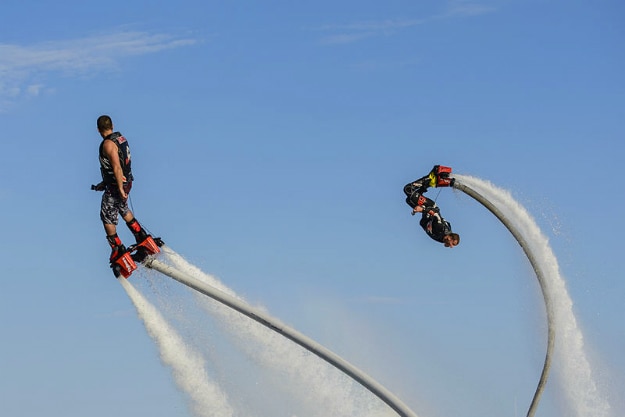 French jet ski champion and entrepreneur Franky Zapata has set a new Guinness World Record for flight-distance on a hoverboard. He traveled a total of 7,388ft off the Sausset-les-Pins coast in the South of France on April 30 to break the previous record of 905ft 2 inches that was set by Catalin Alexandru Duru in 2015. Zapata rose more than 165ft above ground for the attempt. The details of the attempt was confirmed by a representative of the Guinness World Records present at the location. Also Read - Kunal Kamra Reacts to 1.7 Million Dislikes on YouTube Video 'Aaja Beta Carry Teko Roast Sikhaye', Says 'Carry Fans Can Join BJP IT Cell'

ALSO READ How to get a tourist visa for France

This hoverboard, which is called the Flyboard Air, has been developed by Zapatas company, Zapata Racing. According to the firm, Flyboard Air can fly for approximately 10 minutes and can go up to 10000ft. However, it has not yet been proven. Zapata Racing has not released much information about the product but the video, about the world record attempt, posted by the firm shows that a pair of shoes is secured to the base of the device. The jet engine-powered flying device includes a joystick to control the speed, height and direction. The hoverboard will not arrive in the market for a while as it is awaiting legislative approval from the government.

The video posted by Zapata Racing not only proves that travelling on hoverboard is real but it also gives us a glimpse into the future of the mode of transportation. Here is the video.