Everything you need to know about this fascinating journey. 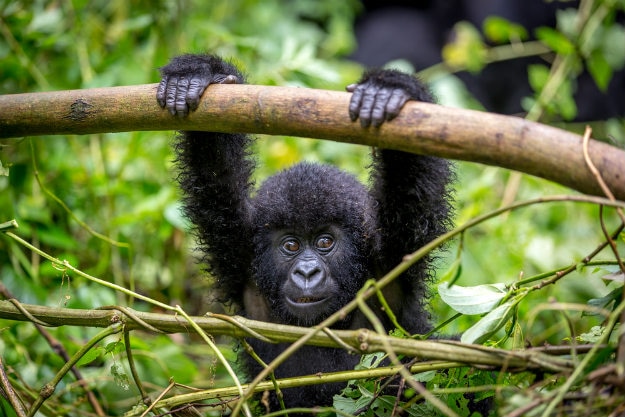 Tracking the critically-endangered mountain gorilla — the world’s largest ape — in the lushly-forested steep bamboo slopes of the Virunga Mountains in the Volcanoes National Park in Rwanda in east Africa is a life-enriching experience. But it comes at a hefty price tag — $750 per permit. Also Read - India-China Ladakh Standoff: 'Situation Stable And Controllable, All Channels Open For Talks,' Says Beijing

However, spotting one of 10 gorilla families in the wild – in altitudes ranging from 2,500 metres to 4,000 metres — is guaranteed by the park authorities with a single-track dirt path hike that can last from 30 minutes to four hours, depending upon the location of the family. The remaining nine gorilla families in nature — far away from public viewing — are for study and research by biologists for their conservation. Also Read - Style Tips to Wear Mom Jeans: How to Look Cool Wearing 'Unhip' Denim at Any Occasion

The last remaining habitat of the vegetarian mountain gorilla, with fewer than 800 individuals, falls in the Virunga massif that spreads to three neighbouring countries — Rwanda, a landlocked country known for a thousand hills, Uganda and war-torn Democratic Republic of Congo. ALSO SEE 10 photographs of the wild that will take your breath away!

“A vast majority of tourists are visiting Rwanda for tracking the mountain gorillas in the wild,” Chief Park Warden Prosper Uwingeli told IANS. “On an average, over 30,000 permits are issued annually for tracking gorillas and a large number of visitors come from the US, France and Germany,” he added. 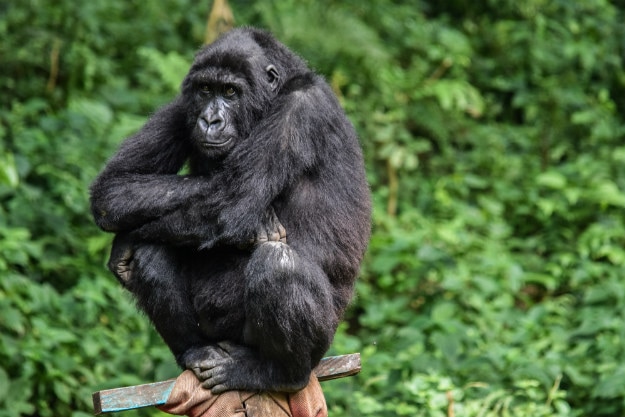 These earned the park a staggering $22.5 million last year. The money is allocated to anti-poaching, community and cultural-based tourism activities. (Overall, according to the Rwanda Development Board, tourism earned Rwanda $318 million — about Rwandan franc 251 billion — in 2015, a four percent increase compared to the previous year. This year it expects an increase of five to six percent.)

Not more than 80 permits are issued per day to groups of up to eight people that are permitted to trek in the Volcanoes National Park, spread over 160 sq km and home to over 300 gorillas. The park is 116 km from the Rwandan capital Kigali, a comfortable two-hour road journey amidst low hills.

“Huhh huhh huhh,” grunts the 220 kg Guhonda, a 44-year-old majestic silverback, perhaps the most photographed and the oldest male gorilla in the region that heads the Sabyinyo family, and our guide Cally responds by saying: “Don’t be afraid and don’t make a loud noise. It’s a friendly gesture.” ALSO SEE The heartbreaking story of how a UNESCO Site Virunga National Park is in danger

The Sabyinyo (named after a dominant volcano) family, the easily accessible one, comprises 17 individuals, including Guhonda’s eldest son Gihishamwotsi, who will replace him after his demise, and two babies. To minimise the chances of transmitting human diseases, visitors are advised to maintain a distance of seven metres from the gorillas. A total of 216 baby gorillas have been named since the introduction of Kwita Izina (gorilla-naming ceremony) in 2005. Twenty-two were named in the 12th edition of the ceremony in September.

“Seeing the majestic mammals in their natural habitat is truly a life-time experience. In fact, it’s the only place in the world where the gorillas are accessible, with a less arduous trek compared to neighbouring Uganda and Congo,” remarked US tourist James Christopher, who was playfully punched by a young gorilla.

The Virunga Mountains are also home to endemic primates like the rare golden monkey, the red tailed monkey, the owl faced monkey, the blue monkey and the grey-cheeked mangabey. The avian fauna it supports includes 178 species, comprising 13 endemic to the mountains. The prominent bird species are the Archer’s ground robin, the dusky crimsonwing, the Ruwenzori turaco and the Ruwenzori double-collared sunbird. 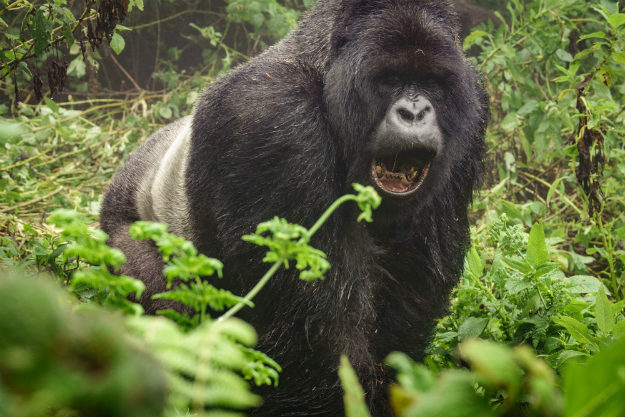 Getting to Volcanoes National Park

One can reach the park boundaries at Kinigi town either by a private vehicle or by public transport. A travel agent will charge $100 per tourist for organising transportation from Kinigi town to the park. The park is connected by road from Kigali.

You can stay in resorts located on the outskirts of the park, but they are not cheap and range from $100 to $200 per night.

Kigali, one of the most beautiful cities in Africa, is the hub of budget and posh hotels.

Gorillas and golden monkeys can be spotted any time of the year. The best time is the rainy season — July to September and December to February.