Aashka Goradia and Brent Goble’s Passionate Kiss in Paris is What Romantic Vacations Are All About! VIEW PICS

Aashka Goradia, one of the popular TV celebs in India, is on a romantic vacation with boyfriend Brent Goble in Paris. the duo have posted some amazing photos that are sure to spark your wanderlust. 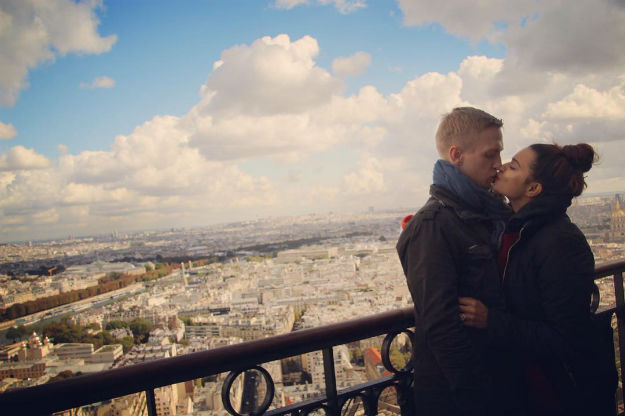 If you are into Indian TV shows, then Aashka Goradia is a name that you are familiar with. The gorgeous actress came to prominence with her role as Kumud in the popular TV show Kusum. Ever since, Aashka has made several appearances in TV shows and award functions. She is loved by her fans for her beautiful looks and impeccable sense of style. She made news when she appeared on the reality dance show Nach Baliye 8 with her boyfriend Brent Goble. Since then, Aashkas fans have been closely following her journey with her boyfriend. Perhaps it helps that Aashka keeps them posted with her marvelous pictures and updates on Instagram. (ALSO SEE Photos of Kavita Kaushik tying the knot in an outdoor wedding in Uttarakhand are simply stunning!) Recently, Aashka and Brent took off to Paris for a vacation. Now, we all know that Paris has the tendency to bring out the romance in even the toughest nuts to crack. So it is not surprising that Aashka and Brent, who are quite romantic as it is, could not contain themselves when they were in Paris. The couple look elated in their Paris photos and it will only make you want to visit this wonderful city with your loved one. Here are some hot photos of Aashka Goradia and Brent Goble living it up in Paris. Also Read - Japanese Restaurant Vandalised in Paris Amid Fear of Coronavirus | Photoes Go Viral

Theres Aashka in the arms of her Prince charming. The romantic caption says it all!

Every single minute of every single day my heart belongs to him. @ibrentgoble #kyathiaayo #travel #travelersnotebook #travelpartnerislifepartner #paris #france The calm and beautiful, 777 Boeing of the rivers#Seine will soothe your heart and eyes all throughout the day. Pass through this glorious visage by foot, metro, or by our personal favourite – the two wheeler. My heart has a special love for rivers; the Seine will shall always be one of my favourites. You flow with grand memories, and gargantuan impressions made by humans thousands of years ago. You witnessed the inception to conception of Paris; cradling and actualizing the dream of every traveler’s bucket list. @gobletravelogue #mustvisit Also Read - Aashka Goradia Doing Complicated Yoga Asanas Is All Fitness Inspiration You Need

A post shared by Aashka Goradia (@aashkagoradia) on Sep 14, 2017 at 9:37am PDT Also Read - Gone With the Wind: Noida Girl Loses Rs 1.5 Lakh as Hackers Steal From Credit Card Without OTP, PIN

Aashka Goradia on top of her style game in the city of love!

Which country/place do you all find the most romantic? Share with us Over here in Paris you will have to fall in love at least once in your life, or Paris has failed to rub off on you. Mine was the twilight and the morning. Mine was a world of rooftops and love songs with my @ibrentgoble #fallinlove #travel #travelblog #Seine #cruise #travelersnotebook #paris #france @gobletravelogue #gobletravelogue Tag us in your favourite destination. Sunglasses @classiccouturegallery

Photographer and his muse against a beautiful Parisian backdrop!

Let none bring you out of your DREAMS.. let your dreams see the daylight.. and still have no sleep without one.. Let your dreams TRAVEL! #Jonathan #thankyou #travel #travelersnotebook #palaisroyal #parisdream #gobletravelogue

A slow-mo video against an elegant backdrop in Paris

This is the picture that sums up Aashka and Brents Paris trip  a romantic kiss at the Eiffel Tower!

@ibrentgoble it’s the kind of kiss that inspires stars to climb into the sky and light up the world. #topoftheworld #eiffelsummit #eiffeltower #travel #travelersnotebook #travelblog #paris #france #truelove #onelove

And looks like the love birds are now headed to New York!

At a time when several celebrities try to hide their relationship status, it is great to see how Aashka and Brent embrace their love for each other. And as they travel hand-in-hand to amazing places across the globe, they inspire thousands of their followers to take such romantic trips with their loved ones. Way to go Breshka!