The Tomb of King Tutankhamun is one of the most famous discoveries in the world, and archeologists may be close to another discovery of a similar scale. 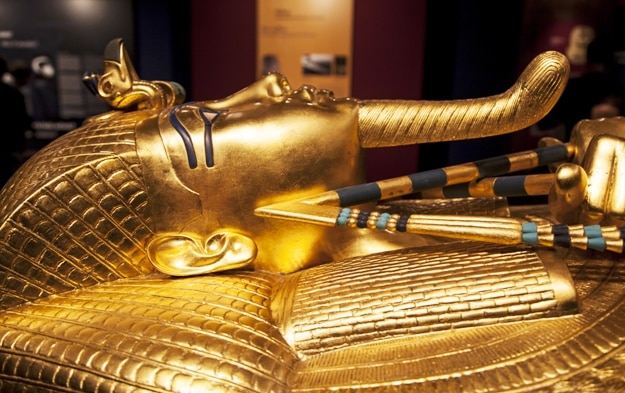 Tutankhamun’s sarcophagus at the Tutankhamun exhibition on December 14, 2014 in Bratislava

In 1922, one of the greatest discoveries in the history of Egyptology occurred when Howard Carter opened the long-lost tomb of the young pharaoh Tutankhamun, more colloquially called King Tut. The pharaoh had died young, and his tomb and its treasures remained untouched by looters in the centuries before its discovery, an extreme rarity. The golden mask of the king is one of the most iconic symbols of ancient Egypt and the pursuit of knowledge related to the culture and literature and everything else about one of the oldest and most accomplished civilizations in the world. And now, archeologists may be close to finding the lost tomb of King Tut’s wife herself, Ankhesenamun. ALSO READ: Two Ancient Tombs Discovered in Luxor, Egypt Also Read - What? Egyptian TV Show Interviews Coronavirus Who Himself was Wearing Gloves

Early in 2017, archeologists were reportedly using radar technology to examine a space around the tomb of King Tut’s successor, Pharaoh Ay. Scans found indications of a tomb in the area that is called the Valley of Monkeys, which lies adjacent to the Valley of Kings, where King Tut’s tomb was found and more than 60 rock-cut tombs of ancient rulers and royalty lie near Luxor. Excavations of the possible tomb of Ankhesenamun, wife and half-sister of Tutankhamun, began earlier this month, according to a report by Owen Jarus of LiveScience. Also Read - Egypt’s Former President Hosni Mubarak Passes Away at 91

Zahi Hawass, who is leading the excavation efforts, said in a statement that it is not yet certain if their work will reveal a tomb at all, or if the tomb they may find does belong to Ankhesenamun. However, historians have said that her tomb lies in the valley itself. Born to Queen Nefertiti and the Pharaoh Akhenaten, known as the ‘heretic king’ for challenging the then religious order and government, Ankhesenamun was first named Ankhesenpaaten. She was first wedded to her father before being wedded to King Tut, her half-brother. In between, she may have bore a daughter to Akhenaten. NOW READ: An Ancient Egyptian Temple from the Era of Ramses II has been Found near Cairo
Also Read - No Military Intervention Needed in Libya, Say Italy And Egypt

When Tutankhamun died at the tender age of 18, Ankhesenamun was to marry his successor, Pharaoh Ay, but she wrote a letter to the king of Egypt’s chief rival nation at the time, the Hittites, seeking an alliance with one of his sons. The king sent his son, but he died by the hand of general Horemheb, who would later become the last pharaoh of Egypt’s 18th Dynasty. After that incident, Ankhesenamun does not appear on any record. Her tomb could help historians complete a story that has been unfinished for centuries.