The wreckage of the World War II era airplane was found in the jungle of Papum Pare, Arunachal Pradesh. 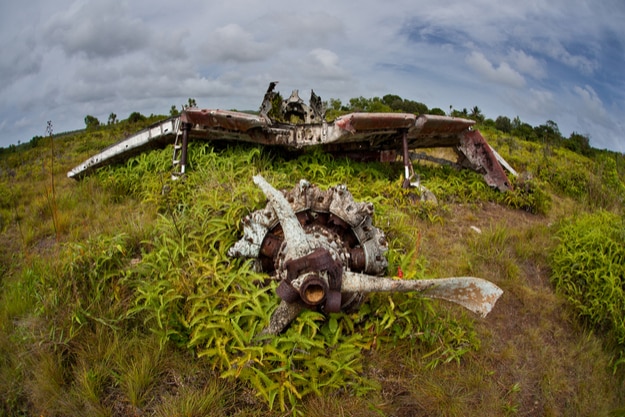 A Japanese Zero aircraft shot down during World War II, on the Pacific island of Yap (for representational purposes)

Imagine going on an expedition deep into the jungle, only to stumble upon a long-lost piece of history. It almost sounds like the plot of an Indiana Jones film, but it actually happened nine days ago in Arunachal Pradesh. A group of locals who were leading an expedition found the wreckage of an aircraft from World War II, and the story of their discovery is fascinating. The youngsters from Kimin found the wreckage in the jungles of Papum Pare in southern Arunachal Pradesh. ALSO READ: Rivers of Arunachal Pradesh That Pass Through Breathtaking Landscapes Also Read - Arunachal Man Booked for Spreading Rumours About Coronavirus on Social Media

The young adventurers went out into the forest with a team to search for the wreckage after they heard stories of a plane that crashed during the Second World War from the head of the nearby village. A total of six people went into the jungles, including youngster Taba. They trekked for seven days in the dense jungles and over the East Himalayan mountains, until they finally found the crash site and the remains of the aircraft. Taba said that they recovered two radial engines from the wreckage. Also Read - Amid Rising Cases of Coronavirus in the Country, Arunachal Pradesh Bans Entry Of Foreigners

The trek took the team from Bogi Nadi, an area near Poba Wildlife Sanctuary and on the Assam-Arunachal border, just around 80km from the capital city of Itanagar. The team trekked for two days before they reached the site, carrying just their basic rations along with a camera and a GPS unit with them. When they finally reached the wreckage, they found that part of the aircraft had already been buried by the jungle. The wreckage had to be dug out to be recovered, and Taba hopes that the parts that they brought back will help experts find out more about the plane and the story behind it. Also Read - China Objects to Amit Shah's Visit to Arunachal Pradesh; India Dismisses Claims

The team could only bring back bits of the wreckage; they didn’t have the equipment to haul the heavy stuff back home. But they did document the discover with lots of photos and mark the site with GPS. The type and origins of the aircraft are still a mystery; Taba and his team believe that it may be of American origin. NOW READ: Best Time To Visit Arunachal Pradesh: Heres When To Take A Trip To Indias Most Northeastern State

During World War II, the Eastern Himalayas fell along the resupply route from India to China for the Allied armies, after Burma fell to Japanese Imperial forces. They were called ‘The Hump’ by the pilots that flew over them. Over the course of the long and bloody war, more than 400 airmen either perished or went missing over The Hump.