Baahubali 2: Places that offer a glimpse into the world of Baahubali

These 5 places in India are a window into the fascinating world of Baahubali. 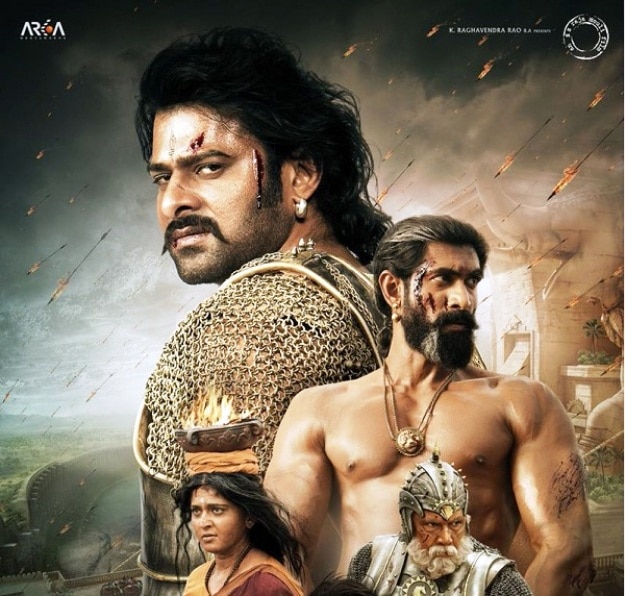 Baahubali 2 release date is just around the corner, which means we are getting closer to learning why, after all, Kattappa killed Baahubali. And to mark the upcoming launch of this magnum opus, we decided to look around the country to find places that look and feel similar to the epic land of Mahismathi, where the films are set. It would seem like the creators of this tale did not steer very far from home, because there are actually several places in the country that can make you think that the fantasy world depicted in the film are real. Here is a look at five of them. ALSO READ: These are the majestic waterfalls that blew your mind in the magnum opus Baahubali
Also Read - Coronavirus in Gujarat: 14-month-old Toddler Dies of COVID-19 in Jamnagar 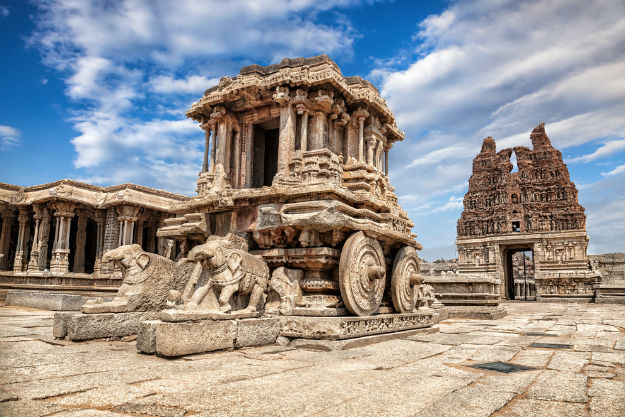 The temple town of Hampi in northern Karnataka is actually a UNESCO-recognized World Heritage Site, and a visit to this place will make you realize who. Hampi is located in a region that was once Vijayanagara, the grand capital of the Vijayanagara Empire. This was said to have been the most prosperous capital of the most powerful kingdom at its peak, and much of the architecture from the time can be seen in the fictional kingdom of Mahismathi. The 15th-century Vijaya Vittala Temple in particular is a great example. Considered the largest and one of the main monuments of the ancient city, the temple has three intricately carved, massive stone chariots, with musical pillars supporting the main temple itself. The Lotus Palace, Elephant Stables, rock cut idol of Narasimha and Hemakuta Hill are other points of interest in and around Hampi that offer a window into this incredible ancient kingdom. Also Read - New York Leads Coronavirus Death Toll With 731 Fatalties in 24 Hours 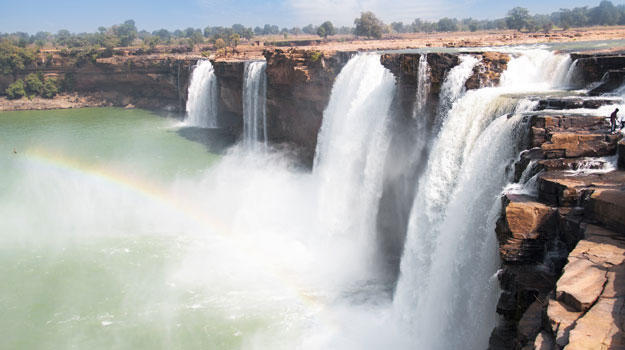 Remember the massive waterfalls seen in the first part of Baahubali? Well, the majesty of the Chitrakot waterfall will remind you of the cascading falls seen in the film. Lying in the state of Chhattisgarh, Chitrakot is the widest fall in the country, so much so that it is called the Niagara Falls of India. It is widest at the peak of monsoon season, with water from the Indravati River falling from a sheer height of around 30 meters. The jagged rocks on top and the dense Bodhghat forest at the bottom only add to the magical atmosphere here. The falls lie within the Kanger Valley National Park, and you can visit this place by bus, taxis or private car. You can find local boat facilities below and several Shiva Lingas on the banks of the pond at the bottom of the falls. Chitrakot is especially beautiful during sunsets. Depending on the time of the year you visit, you can find several activities at the waterfall and around it. ALSO READ: 8 most dramatic waterfalls in India that you should visit 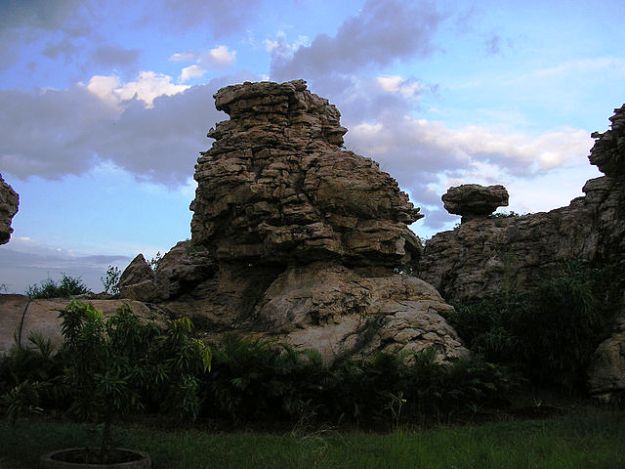 The Orvakal Rock Garden in Andhra Pradesh is an expansive site full of beautiful natural rock formations and small water bodies. It is located around 23 km from the city of Kurnool, and 237 km from Hyderabad. Situated along the Kurnool-Nandyal highway, the rock garden is around 3 km away from Orvakal village. It is full of quartz and silica rock formations that you can find in only a handful of places in the world. The rocks, formed over the millennia around a natural lake, make for a picturesque setting similar to many scenes in Baahubali. In fact, part of the film was shot at this very site, which is spread across a massive 50 acres. The garden has been developed with tourists in mind, with several cottages where you can rest and a restaurant at the entrance. You can explore the rock formations by following the walkway through them. There is also an interesting garden at the top of a hill with metal animal sculptures. 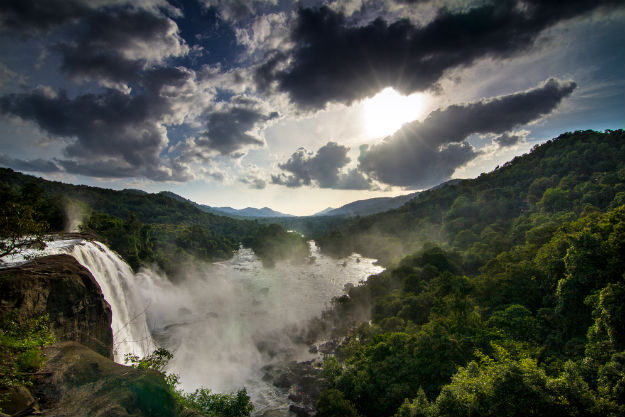 While the Chitrakot waterfall will remind you of the majestic falls in Baahubali, a visit to Athirapally Falls in Thrissur will take you to the actual place where the scenes were shot. This is one of the most popular spots in Kerala, and a popular weekend destination from Coimbatore and Kochi. The Athirapally Falls lie on the Chalakudy River, at the edge of the Sholayar hills. The water here falls through 80 feet, and you can find many streams of water make their way through the rocks, meeting the river below. The sight is especially spectacular during the monsoons. The river itself is considered a biodiversity hotspot, with 85 freshwater fish species residing in its waters. The surrounding Athirapally Forest is also home to rare and endemic species like the Indian grey hornbill, bison, lion-tailed macaque and big cats like tigers and leopards. 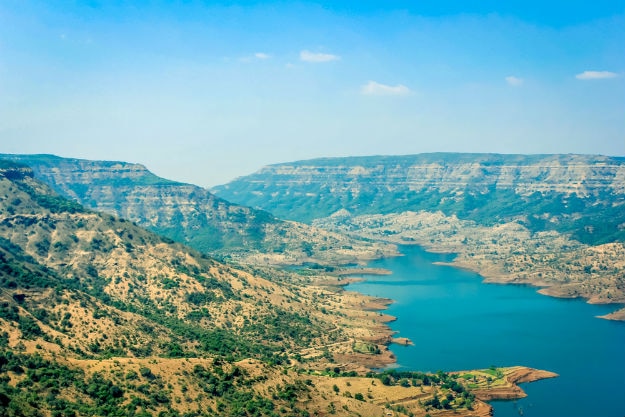 The summer retreat of Mahabaleshwar was also where several parts of Baahubali was shot, likely chosen for the task because of its towering hills and stunning views of the Western Ghats. Once the summer capital of the Bombay Presidency in the British era, Mahabaleshwar also offers several colonial cottages and mansions. But the big draw of this hill station is its viewpoints. Mahabaleshwar and the neighboring Panchgani have several viewpoints that offer panoramic views of the hills and mountains. You can enjoy the sights while munching on homegrown strawberries, or visit ancient monuments like the Mahabaleshwar Temple and Pratapgad. Lodwick Point, Venna Lake, Sunset Point, Parsi Point and Wilson Point are other places that will remind you of the world of Baahubali. ALSO READ: 6 photos which will make you want to leave for Mahabaleshwar, right away!