After tying the knot with boyfriend Vikrant Singh Rajput in the Bigg Boss house, Bhojpuri actress Antara Biswas who is better known by her screen name Mona Lisa, is finally on a honeymoon in Malaysia. Mona Lisa's adorable honeymoon photos make you feel happy for her and tempt you to take a trip to Malaysia at the same time. 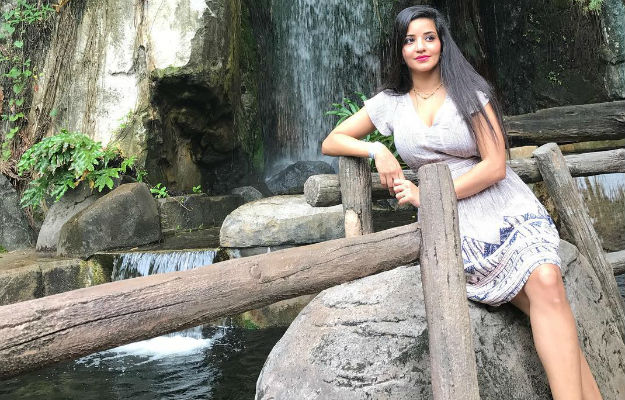 While the name Antara Biswas may not really ring a bell, you may instantly recognize her from screen name Mona Lisa. The Bigg Boss 10 contestant made waves earlier this year with her appearance on the popular TV reality show. Even before Mona Lisa appeared in Bigg Boss 10, she was quite a big name in the Bhojpuri film industry, having starred in around 50 Bhojpuri films. She has also appeared in several other regional language movies including Bengali, Oriya and Telugu. Mona Lisa has become a household name in India since her Bigg Boss 10 appearance and her life has been quite hectic since then too. (ALSO SEE Lopamudra Rauts vacation photos are so hot theyd give Bigg Boss 10 a run for its money!) Those who follow Big Boss may recollect that the actress tied the knot with her boyfriend Vikrant Singh Rajput in the Bigg Boss house on January 17 this year. However, it’s only now that Mona Lisa has been able to make the time to go on her much-awaited honeymoon. The actress has posted some beautiful photos on Instagram from her honeymoon. Check out these lovely Malaysian honeymoon photos of Mona Lisa and Vikrant Singh Rajput! Also Read - Trending News Today April 05, 2020: Priyank Sharma Creates 'Buzz' Across Internet, FINALLY Confirms Relationship With VJ Benafsha Soonawalla

At a busy street in Kuala Lumpur

Being her fun-locing self at Kuala Lumpur’s King Palace

Awwww… i am such a ” bechari

Antara Biswas striking a pose at Sunway Lagoon in Malaysia

Walking around the lovely streets of Malaysia

With some cute followers of Bigg Boss 10!

Among The Many… they are the ” cutest #biggboss10 ” regular followers …. #feelingblessed #somuch #love #fromworldwide #thankyougod

We hope that Antara Biswas aka Mona Lisa gets to embark on many such beautiful holidays across the world and keeps us posted with such adorable photos too.