Bihu 2017: Everything you need to know about the Bihu festival

With Bihu just around the corner, it's time to take a closer look at one of the most unique festivals of India. 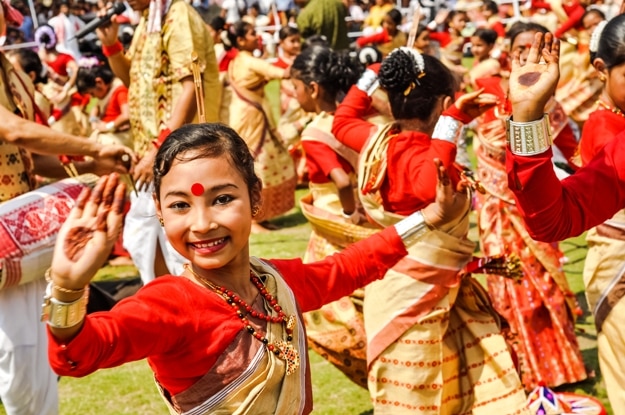 Every year, Assam and its Diasporas celebrate one of the most important cultural festivals of India: Bihu. This year, Bohag Bihu 2017 falls on 14, 15 and 16 April. These three days will be marked by festivities across Assam and parts of its neighbouring states. But like a lot of things about northeast Indian culture, Bihu too remains lesser-known to most of India. So here is a comprehensive look at everything that you need to know about Bihu. ALSO READ: Festivals and events in India in April 2017 that you cannot miss
Also Read - PKCC vs KCC Dream11 Team Prediction ECS T10 - Barcelona 2020 Mact 41: Captain, Fantasy Playing Tips And Probable XIs For Today's Pakcelona CC vs Kings CC T10 Match at Montjuic Ground, Barcelona 1 PM IST October 26 Monday

There are three festivals of Bihu

Bihu does not just come once a year; there are actually three different Bihu festivals celebrated every year. The first one comes in January-February, called Magh Bihu to symbolize the end of the harvest season. The second, called Rongali Bihu, is the key festival that is coming soon and usually falls in April or May. The third one, called Kati Bihu, falls somewhere past the middle of the year, mostly in October. All three are celebrated in their own way, although they are all linked to the agricultural cycle of the region. Also Read - Moderate-Intensity Earthquakes Hit Manipur & Sikkim, No Damage or Loss of Life Reported

Bihu is an irreligious festival

India has several festivals that celebrate the harvest, with Bihu sharing the same dates with the harvest festivals of Baisakhi and Vishu this year. But while the latter two are religious (Baisakhi is a Sikh festival and Vishu is a Hindu one), Bihu is interestingly an irreligious one. As such, it is celebrated by everyone in Assam, going beyond the lines of cast, creed and faith. Everyone comes together in a cheerful celebration of the fruits of the fertile soil nourished by the mighty Brahmaputra River and protected by the tall Blue Mountains around it. Also Read - Rajasthan: Woman head constable ends her life in Bundi 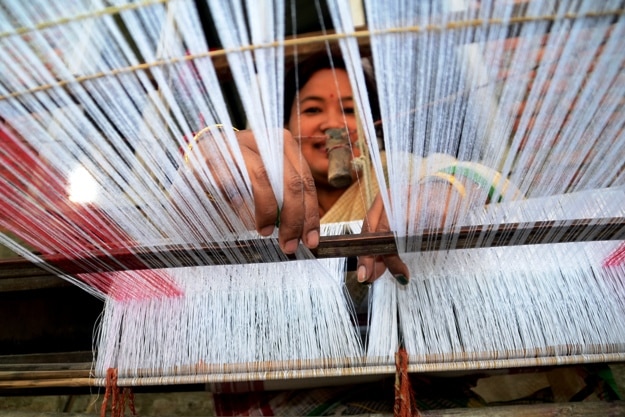 The Bihu festivals of Assam celebrate the change in seasons and are the result of the state’s largely agrarian culture and society. Many in Assam live and make their livelihood from what they reap, which is why Bihu itself is so important. And arguably the most important Bihu festival is Rongali Bihu, which celebrates the reaping of the harvest and the start of a new year. Also called Bohag Bihu, this festival falls on the beginning of the harvest season and the Assamese cultural calendar.

Bihu is celebrated for days

This year, Bohag Bihu is spread across three days, during which the valleys of Assam become colourful, vibrant and cheerful. The aroma of newly blossomed spring flowers like Nahor and Ketki fill the air, as do the music of migratory birds that flock the region, like Keteki and Kuli. The festival begins with preparations, as women make the traditional costumes, Mekhela Chador and Gamosa. The kitchens run overtime to make special foods for the festival, like Sunga, Tekeli Pithas, Laroos and Monda. ALSO READ: 5 wonderful facts you did not know about Assam

The first day is Goru Bihu 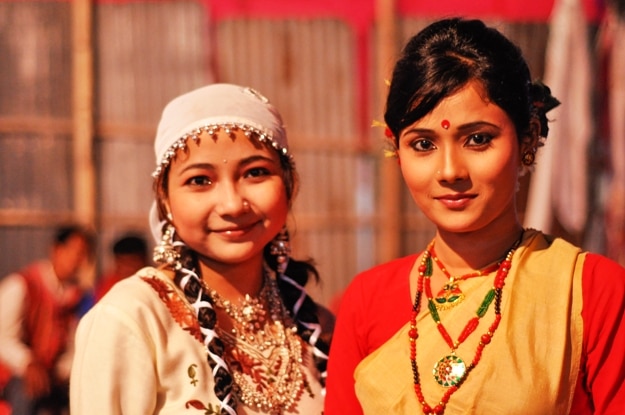 The first day of Rongali Bihu is Goru Bihu, which is when farmers take their livestock and cattle to their local pond or river for an auspicious bath. A special paste with turmeric and various pulses, called Mah-Haldi, is applied on the livestock. The animals are allowed to roam around the fields freely, and farmers get new tethers and ropes for their livestock too. The cattle is caressed by sprigs of the local Makhiyati and Dighalati plants, with an accompanying chant that seeks blessings for them.

The second day is Manush Bihu

On the second day, Manush Bihu celebrates the farmers and community members who worked hard to bring the harvest to fruition. Men, women and children of the community come together for the celebration, wearing new clothes and taking the opportunity to visit their family members. Every household will have tasty delicacies waiting to be consumed by the guests and hosts. Many people take the opportunity to settle and put behind old grudges and start the new year with positivity and renewed relations. Family and friends are presented with newly woven Gamosas. The festivities, which include song, dance and feasts, can last for up to seven days. 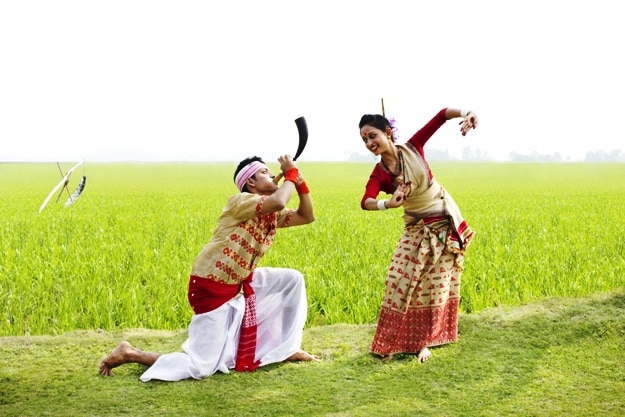 Bihu man blowing on a pepa while Bihu woman dances

Rongali Bihu also marks the time when the young folks in villages perform songs and dances of love in their traditional attire, in order to woo the women. These gatherings and performances are called Mukoli or open Bihu. Another type of dance performed during the festival is Husori, where drums are beaten at the gate of households to announce the arrival of dancers. Men have typically performed this intense dance, but women have joined too in recent years. Households gift the performers some money in a beetle leaf, and they in turn receive blessings for the new year.

Song and dance are vital to Bihu celebrations

Folk songs and dance are vital to the celebration of Rongali Bihu. There are Bihu Geet that are sung especially for the festival, and the songs can differ with each ethnic community in Assam. Young men and women also come out to perform the Bihu Naach on the occasion, with controlled, rhythmic movement of the hips, hands and palms to the tune of traditional instruments such as the Toka Xutuli, Baanhi, Dhul and Gogona.