World's richest man, Bill Gates, is now on Instagram and his first picture is a heartwarming photo from his Tanzania trip. 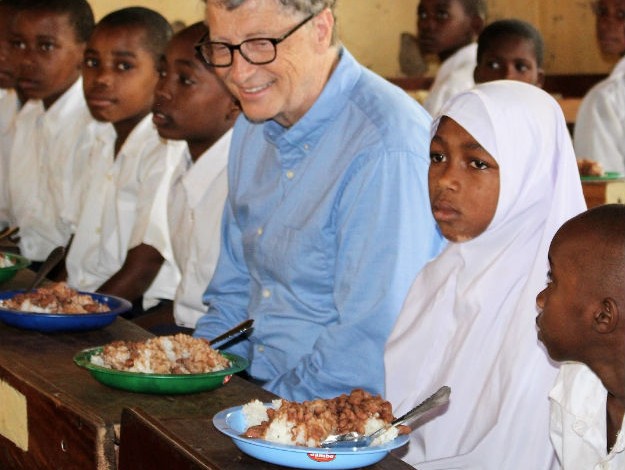 We all know him as the richest man in the world. We also know him as an extraordinary tech entrepreneur and an exceptional human being. But what we do not know Bill Gates as is a person who flaunts his lifestyle on social media. Most appearances that Bill Gates makes are usually reported by new channels and tech magazines. The man is known for supporting a number of charitable causes as well as making his presence felt in the ever-changing tech domain. But, in a move that surprised many of his followers, Bill Gates suddenly made a debut on Instagram. (ALSO SEE Sundar Pichai is the new age executive globetrotter! Dont believe us? VIEW PICS HERE!) With an simple and innocent handle name  thisisbillgates  the worlds richest man shared opened his Insta journey with a travel picture. He posted some beautiful photos from Tanzania, where he was visiting kids at a school as part of his charitable endeavors. In his post, he also mentioned his connection with Tanzania and expressed his admiration for the beauty of the place. Heres a look at Bill Gates first Instagram photo: Also Read - PM Modi Interacts With Bill Gates, Underlines India's Public Engagement-Based Approach to Fight COVID-19

Hello from Tanzania, Instagram! I just had a great lunch with some amazing kids at Kicheba Primary School in Muheza and met Upendo Mwingira, a remarkable physician who has dedicated her career to fighting neglected tropical diseases. Melinda and I have been coming to Tanzania for many years now. I always love seeing how much progress the country has made to improve health and provide opportunity. Plus, the scenery is stunning. Whenever I travel to places like this, I wish others could come along and meet the people I get to meet. I have no doubt it would leave them as optimistic as I am about progress happening around the world. Ill be sharing photos from my adventures here on Instagram, and I hope youll follow along. Also Read - Bill Gates Says COVID-19 Pandemic Will Define This Era, Calls it 'World War Except we're All on Same Side'

Bill made sure to mention that he plans to continue posting pictures of his adventures. In just 5 days, he already has 255k followers. Knowing how Mr. Gates loves to travel the world for the noble causes he supports, it will be exciting to follow his journeys on his Instagram account. After all, who better to inspire you than the richest man on the planet?! It is worth noting that other great entrepreneurs have already been on Instagram for a while. Mark Zuckerberg, founder of Facebook, boasts of 2.9 million followers and often posts photos of his travels around the globe. Like this time when he was on top of a glacier in Alaska

One of my favorite shots on top of a huge healthy glacier in Alaska with a pregnant Priscilla a couple weeks back.

Or this when he went kayaking with wife Priscilla

Priscilla and I spent a few days in Alaska as part of the Year of Travel challenge. It’s beautiful here.

Virgin Atlantics Richard Branson is a self-confessed adventurer who loves posting photos of his travels and adventures on Instagram. Like this time when he went kite-boarding in blue waters

Catch me if you can. Photo credit: @hijack

Diving the Kodiak Queen in the BVI @unitebvi. Photos by Matt Young

We hope that in time, Bill Gates too has some exciting vacation and adventure pictures on his Insta files to inspire us further.