The video shows mother and son Gemma Wilson and Charlie getting chased by a Nepalese woman after an alleged altercation over the price of some tea that they had. 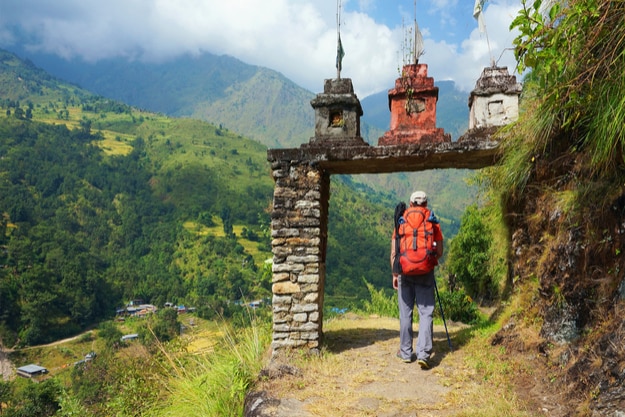 Taking you up to an altitude of 5,416 meters through the Thorung La pass, the Annapurna Circuit trek gives you incredible views of peaks like Dhaulagiri, Gangapurna, Tilicho and Pisang. It also brings you closer to a variety of Hindu and Tibetan cultures through the small villages along the way, ideally without angry Nepalese women dual-wielding two blocks of wood. Unfortunately, a British mother and her stepson did end up facing one such woman. Also Read - Border Trade With Bangladesh, Nepal, Bhutan, Myanmar Continues Despite Ban on Movement

The Daily Mail has put up a terrifying video of the British duo, running the dangerously narrow sides of the Annapurna mountains in central Nepal being chased by the angry woman. Quickly running out of breath, Wilson ultimately finds herself face to face with the worst nightmare for any tourist: an angry local. Not exactly the best way to start the already-challenging Annapurna trek. They were just over 4 km into their journey. ALSO READ: Tips for going on a trek in the Himalayas Also Read - HK vs NEP Dream11 Team Prediction, ACC Eastern Region T20 2020, Match 3: Captain And Vice-Captain, Fantasy Cricket Tips Hong Kong vs Nepal at Terdthai Cricket Ground, Bangkok 8:00 AM IST

According to Wilson’s account reported by the Daily Mail, she and her son stopped at the tea shop for some tea, as one is wont to. The tea shop owner ended up charging them NPR 150, which is around GBP 1.07 instead of what they said is typically NPR 50, which is around 36 pence. Wilson said that she paid the money and stepped out to take a photograph of the establishment after remarking that the price was higher than what they pay normally. Wilson said that the woman attacked her with stones and a plank of wood shortly afterwards, screaming. The two ran, and the video captures some of the scenes that took place thereafter. Also Read - Coronavirus: 'Follow Airport-like Procedures at Borders' Checkpoints', MHA Issues Advisory to ITBP, SSB

The video sees the tea shop owner quickly catch up with Gemma Wilson and start screaming at her. Wilson, terrified, immediately begins to plead and back away. The tea owner berates Wilson for attempting to bargain with her before ranting about, presumably, the general attempt by tourists to haggle and get cheaper prices for food and accommodation. It’s a problem you can find in places where the tourism industry is mostly run by small local shop owners, wide-eyed travelers trying their best to score the best deal possible. The shop owner’s rant quickly devolves into name-calling before Wilson slips off.

Wilson said that she got bruised in her hand after getting hit by a stone, and that the angry shop keeper backed off after seeing a man nearby walking a donkey. She added that she later tried to contact the police but found that the station was several days away. The villagers said that the shop owner has attacked other travelers before, according to Wilson. CHECK OUT: What is AMS and How to Prepare for Acclimatization When Heading to the Himalayas

But that’s just one account; we cannot get the full picture without hearing the other side. Until then, we can only recommend this to intrepid trekkers in the Himalayas: food and drinks in the mountainside are generally costlier than usual because of the logistical challenges involved. It’s best to avoid bargaining in such cases and support the locals. Not everyone is friendly; exercise sound judgement and avoid common pain points like money, religion and alcohol unless you know that the other side is comfortable with it. And don’t let such instances dampen your spirits; look around you, there’s a whole world to explore.