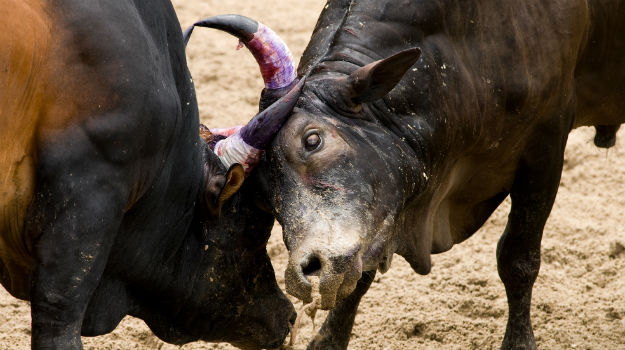 The bloody bullfighting sport in Goa, known locally has Dhirio is back in the news again after a government notification that disfavors the sport. Dhirio, which is popular in the coastal villages of Goa, involves two specially bred bulls taking on each other till one of them is injured or killed or simply too tired to fight the other one. The festival which is held in the post-harvest season is just another version of Jallikattu, Tamil Nadu’s popular bull-taming festival, only gorier and bloodier. Also Read - Indians Onboard Quarantined Cruise-liner Will be Back Soon: Envoy

Intriguingly, the festival was banned way back in 1996 for violating the Prevention of Cruelty to Animals (PCA) Act, 1960. However, the ban has done little to prevent the fights from taking place. The fights continue to happen even to this day. Announcements regarding the timing and the venue are passed on to select groups of locals who then relay it further. As a result, these underground bullfighting events often attract large crowds and Goa government’s notification attempts to discourage gatherings like these. Curiously, even as animal rights activists are celebrating the government notification, a legislative committee is attempting to reexamine the provisions of the PCA to see if Dhirio can be made legal again. The legality aside, all of it finally boils down to the people themselves, who attend these events in large numbers despite them being illegal.

And so, it only seems fair that we ask you, our dear readers, to tell us your opinion on a sport like bullfighting, which is popular not just in India but also in countries such as Spain where people throng in large numbers to see bulls being tamed or race raging bulls for thrills. Heck we even had a Bollywood movie that promoted the sport! So tell us, dear reader, do you believe bullfighting is cruel? Take the poll below!

Have something to add to the story? Post your comments in the discussion board below. We will be thrilled to hear from you!