The Hollywood power couple and their family are exploring India, and it is awesome. 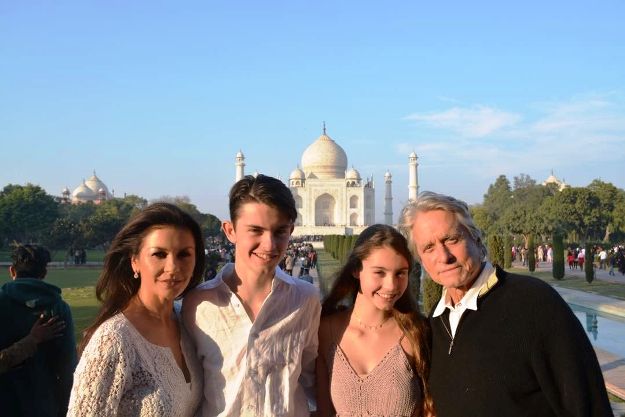 The actors Catherine Zeta-Jones and Michael Douglas need no introduction. Welsh actress Catherine Zeta-Jones is an accomplished performer, and her husband Michael Douglas is a veteran in the business, most recently acting in the Marvel flick Antman. And the two of them have been exploring India with their two kids for a few days. Naturally, their first holiday stop was the Wonder of the World itself, the Taj Mahal in Agra. Here are a few photos of the family enjoying the sights, sounds, tastes and smells of this vast country. ALSO READ: 8 magnificent photos of Taj Mahal that prove why it is a wonder of the world! Also Read - Trump India Visit: Do You Know Taj Mahal’s Tombs Were Cleaned For First Time in 300 Years?

And that’s her excited walking towards the Taj Mahal

That’s the whole family, happily ticking off one of the Seven Wonders of the World from their travel list

Spotting a tiger in the wild during the jungle safari

Catherine Zeta-Jones was, like the millions before her, swept away by the magnificence of the Taj Mahal, referring to it as the ‘ultimate love story’. The Taj Mahal was famously built by Mughal Emperor Shah Jahan as a memorial for his beloved wife Mumtaz Mahal. His grave was later placed next to his queen within the Taj Mahal. During his last days, it is said that he was imprisoned in a cell with a view of the Taj Mahal itself. NOW READ: 11 stunning photos of UNESCO World Heritage Sites in India that are NOT the Taj Mahal!

The family next headed out for a jungle safari, with Mrs. Jones sharing a video and photo of the animals they encountered, including a mounted elephant that they crossed paths with along the safari and a hungry tiger chomping on his first meal of the day: a torn-up carcass of an animal, probably killed in a previous hunt and stored by the tiger for its next meal.