Chenab bridge has been designed to bear an earthquake impact of Zone V category.

New Delhi: The Chenab Bridge in Jammu and Kashmir will be the highest railway arch bridge in the world at 476-meter long, (1,178 ft), even taller than the Millau Viaduct in France which currently holds the distinction. Chenab Bridge will have the widest span of the Indian broad gauge railway network in the country. Recently, Prime Minister Narender Modi lauded the completion of Arch closure of the Chenab Bridge, the world’s highest railway bridge in Jammu & Kashmir by the Indian Railways, and termed it as an example of changing work culture marked by the ethos of “sankalp se siddhi”.Also Read - Mandatory 48 Hour-Acclimatisation For All Those Travelling To Leh; Ladakh District Administration Issues Advisory

“Capability and trust of the countrymen is setting an example before the world. This feat of construction does not only showcase the growing prowess of India in the field of modern engineering and technology but also is an example of changing work culture marked by the ethos of ‘sankalp se siddhi’,” PM Modi tweeted. Also Read - India-EU Free Trade Agreement Negotiations Soon: Report

The Prime Minister was responding to a tweet by Railways Minister Piyush Goyal who said that this bridge makes every countryman feel proud.”Ek Bharat, Shresth Bharat: Under the leadership of PM Narendra Modi, the construction of the arch of the world’s tallest railway bridge on the Chenab river in Jammu and Kashmir is completed today. An excellent example of excellent engineering skills, this bridge makes every countrymen feel proud,” Goyal tweeted.The Indian Railways on Monday completed the Arch closure of the iconic Chenab Bridge which is part of the Udhampur-Srinagar-Baramulla rail link project (USBRL). Also Read - Several Feared Dead as Taxi-Van Skids Off Zojila Pass in Jammu-Kashmir

According to a statement issued by the ministry, the Arch closure was one of the most difficult parts of the bridge over Chenab and its completion is a major leap towards the completion of the 111 km-long winding stretches from Katra to Banihal. It is arguably the biggest civil-engineering challenge faced by any railway project in India in recent history. The 5.6-meter last piece of metal was fitted at the highest point today and joined the two arms of the arch that currently stretch towards each other from both the banks of the river. This completed the shape of the arch that will then loom over the treacherous Chenab, flowing some 359 meters below, said the ministry in a statement. After the completion of the arch work, removal of the stay cables, filling of the concrete in the arch rib, erection of the steel trestle, launching of the viaduct, and track laying work will be taken up.

“Infrastructural Marvel in Making: Indian Railways is well on track to achieve another engineering milestone with the steel arch of Chenab bridge reaching at closure position”: tweeted Minister of Railways, Piyush Goyal, sharing a glimpse of the world’s highest railway bridge in February.

Infrastructural Marvel in Making: Indian Railways is well on track to achieve another engineering milestone with the steel arch of Chenab bridge reaching at closure position.

It is all set to be the world’s highest Railway bridge 🌉 pic.twitter.com/yWS2v6exiP

The project, which is being developed by the Konkan Railway, is India’s first cable-stayed Indian Railways bridge and will be a part of the Udhampur-Srinagar-Baramulla Rail Link (USBRL) section of Northern Railway in Jammu & Kashmir. 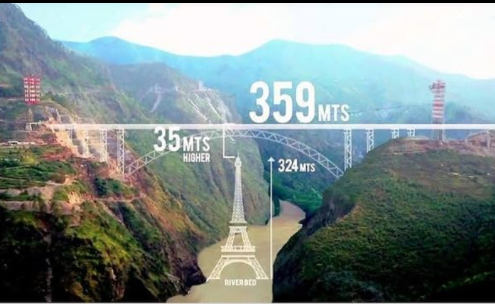 It is the first time in the world that a bridge has been designed for Blast Load in consultation with the Defence Research and Development Organization (DRDO). Indian Railways for the first time use the Phased Array Ultrasonic Testing machine for inspection of welds in bridge in India. 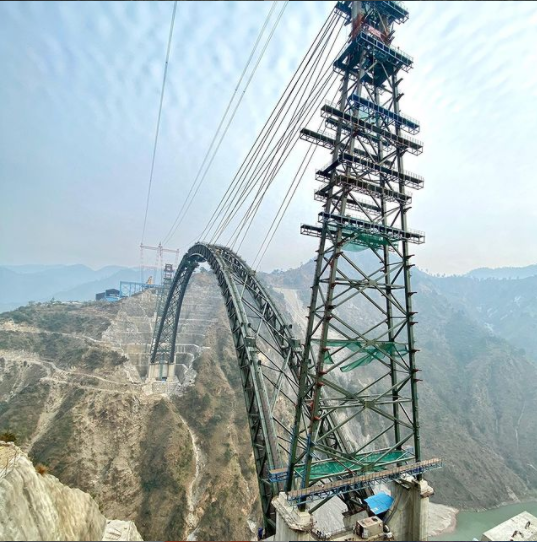 The bridge has been designed to bear an earthquake impact of Zone V category. The Chenab site lab has been certified by National Accreditation Board for Laboratories for testing of welded elements for the first time on Indian Railways. An extensive health monitoring and warning system will be planned for the bridge. The bridge is under construction between Bakkal and Kauri in the Reasi District of Jammu and Kashmir. The Chenab bridge is the seventh-largest arch-shaped bridge in the world as there is no support except on both sides of the riverbanks. The arch is being supported by piers and trusses, as reported by DNA.

The construction of this bridge was started in 2004, but the work was stopped in 2008-09 keeping in mind the safety of rail passengers because of the frequent high-velocity winds in the area.