Climbers go on Kenya Expedition, Give Back to Community by Donating Solar Equipment

For the short film Off the Grid by Goal Zero, climbers Alex Honnold and Cedar Wright sent a few routes in Kenya and got the opportunity to give back to the community. 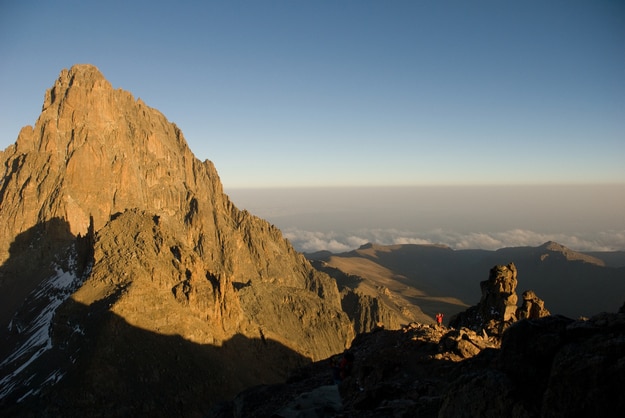 Climber almost at the top of Mount Kenya

Alex Honnold, the climber who famously free-solo climbed El Capitan in Yosemite National Park earlier this year, was in Kenya with fellow climber Cedar Wright on a climbing expedition. Together with Maury Birdwell, co-founder and Executive Director of the Honnold Foundation, they explored and climbed a few peaks in Kenya, spending 24 days in the African country. At the end of those 24 days, they donated the solar power generation equipment they used for the trip to the rangers of the Mukutan Nature conservancy in Kenya. Here’s a quick video of their journey. ALSO READ: Kenya burns 100 tons of ivory from 6000 elephants to make a point! Also Read - Trending News Today March 11, 2020: World's Only White Female Giraffe & Her Calf Killed by Poachers At Kenyan Wildlife Sanctuary

During their journey, Honnold, Wright and Birdwell were hosted at the Mukutan nature conservancy, spread across 90,000 acres of untouched natural land and jungles at the edge of Kenya’s Rift Valley. Sveva Gallman, the operator of the conservancy and a conservationist, spoke about the threat of poachers, increasingly better-equipped and better planned, entering the conservancy and killing its protected species. For the rangers tasked with protected Mukutan’s residents, the poachers are just one of the threats. Also Read - Kenyan Man Seals Wife’s Genitals With Super Glue After Suspecting Her Of Having '4 Affairs'

When asked about the most dangerous animals in the conservancy, rangers jokingly rattle off one name after another, “Snakes, buffaloes, elephants, lions…” When Honnold accompanies the rangers on a night patrol, they encounter a wild buffalo, one of the most dangerous animals in the conservancy, just five minutes from their base. But for these rangers, the darkness is their biggest threat. Here in the equatorial region, it’s pitch dark for half the day. And these rangers are tasked with patrolling 90,000 acres of wild lands, completely off the grid. Also Read - Dream11 Team Prediction Kenya vs Uganda: Captain And Vice Captain For Today CWC Challenge One-Day Between KEN vs UGA at Al Amerat Cricket Ground Oman Cricket (Ministry Turf 1) 11:00 AM IST December 5

The rangers here rely entirely on portable power to charge their flashlights and radio. And that is why the contributions of Honnold and the rest of the Goal Zero team was so important. For the 24 days of their climbing expedition, the climbers used Goal Zero’s portable solar panels to charge their equipment. More than 2,300 watts of electricity was used per day for filming. And at the end of the day, all of that was fitted for the rangers’ base in Mukutan conservancy. It’s a move that should hopefully make it easier for the rangers to do their jobs and protect this vast, yet fragile, jungle ecosystem. NOW READ: 13 incredible countries you can fly to under Rs 25,000 for your summer vacation

Before they did that, though, they used the power of the sun to chronicle their adventures as they sent a bunch of routes in Kenya. Their exploits included sending Mount Poi, a 700 meter high gneiss wall located around 800 km north of Nairobi. They also sent the famous famous cat and mouse rock formation in Samburu, also called Paka na Panya or Nkadoru Murto by the locals. And their main event was Mount Kenya, standing high at 5,199 meters as the highest mountain in the country.