Craving Punjabi Delicacies? Here Are 14 Dishes And Where You Can Enjoy Them

These dishes have won hearts all over the country and the globe. 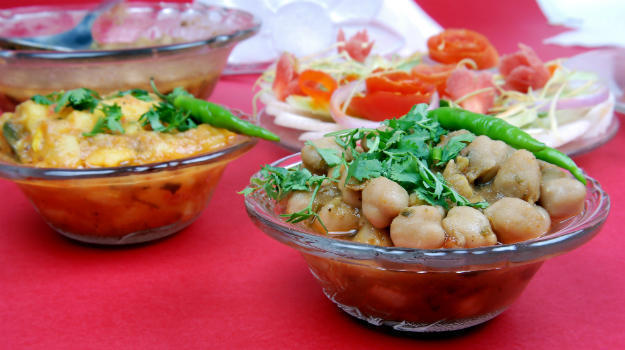 Everyone loves Punjabi food. The cuisine has become so popular that we are now able to lay our hands on all the traditional dishes which are now synonymous with Punjabi food and is served in almost all eateries across the country and has become popular abroad. These dishes have won hearts all over the country and the globe. If you happen to visit Punjab, Chandigarh or Delhi, then here’s a look at the quintessential dishes of Punjabi cuisine that are served in some of the popular eateries in these regions. Also Read - Hungry For Biryani? Here Are 14 Places in Bangalore That Will Make You Drool 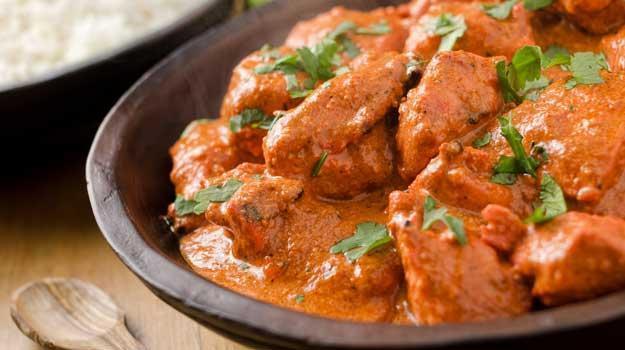 Also Read - Foodie's Delight! Here Are 13 Items You Must Try on Your Visit to Chennai

This famous dish is now served and devoured the world over. However, Moti Mahal takes credit for this dish. The restaurant was run by a gentleman by the name of Kundan Lal Gujral in Peshawar. But after the partition, he moved his restaurant to Delhi, and before you knew it, it became supremely popular with the masses. Celebs from across the world rave about this dish including Brad Pitt, Anushka Sharma and Kelly Rowland.

Served in almost every restaurant in the country, it has many variations and is a favourite amongst many people. Head to Moti Mahal in Delhi especially the one in Daryaganj and it has also opened its restaurant in Jalandhar. In Ludhiana head to Baba’s Chicken and Sonu’s Kitchen; and in Amritsar, one can go to Makhan Fish, Chicken Corner and Surjit Food Plaza. Mayur Dhaba at Karnal is famous for its Butter Chicken. In Chandigarh, one can head to Pal Dhaba and Deluxe Dhaba. Chawla’s in Mohali is a good option and so is Punjabi Haveli. 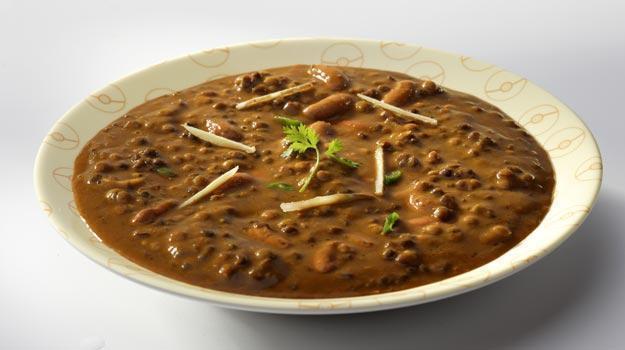 This delicious lentil preparation takes a day to make if one follows the original method. It’s the crème de la crème of dals and is high on proteins. Julia Roberts is said to have been served Dal Makhani when she was shooting for ‘Eat, Pray, Love’ and she absolutely loved it! Moti Mahal in Old Delhi is renowned for their dal. Do try the dal at Kesar da Dhaba in Amritsar, Zimidara Dhaba in Ludhiana, Lucky Dhaba in Jalandhar, Karnal Haveli in Karnal and Amrik da Dhaba in Bathinda. 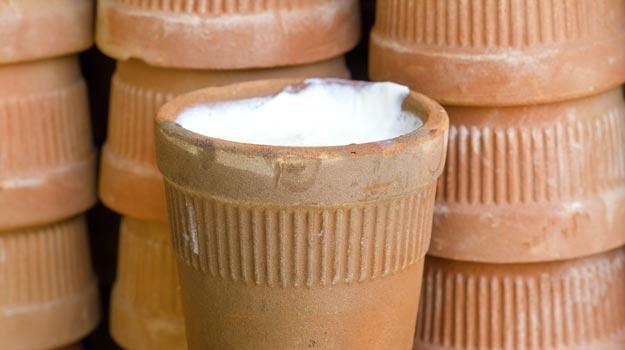 Known to be a coolant, it’s widely consumed across the country but the best way to have it is in clay pots that are full of this thick, creamy and frothy lassi. There are some in Punjab who make it on a large scale and use washing machines to churn the lassi. If you happen to pass through Murthal do stop at Sukhdev Dhaba. In Amritsar make sure you try the lassi at Ahuja Milk Bhandar, Gian Chand Lassi Wale and Kundan’s. In Delhi, while visiting Old Delhi, in Chandini Chowk you will get really good lassi at Amritsari Lassiwalla and Meghraj amongst many others. In Chandigarh try the lassi at Kesar da Dhaba. 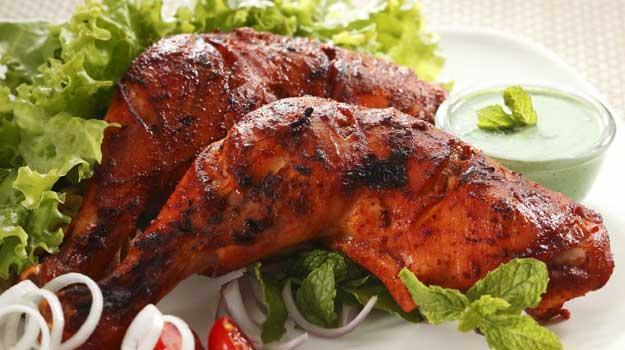 Grilling it slowly and steadily ensures that every mouthful is full of succulent pieces of this divine dish which is popular in India and the world. Its fiery red colour and unique flavor make one beg for more! Even Burger King has its version of the Tandoori Chicken in India. In Amritsar visit Surjit Chicken House and Beera Chicken House. In Ludhiana, Baba’s Chicken and Aman Chicken serve this sumptuous dish. Papaji Dhaba in Mohali has some lip-smacking Tandoori Chicken. In Delhi, one can try the chicken at Karim’s, Moti Mahal, and Bukhara. 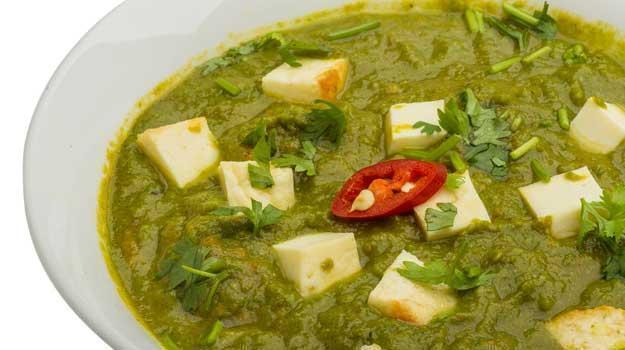 This dish would surely rank very highly in Popeye’s favourite list of dishes because the star of the dish is the spinach. Emraan Hashmi can’t seem to get enough of this dish and has to have it every day! It is usually eaten in winters but it is such a hit, that it’s consumed throughout the year. Kesar da Dhaba in Amritsar is a winner when it comes to making this dish. In Chandigarh, Deluxe Dhaba and Pal Dhaba are a must-try. In Jalandhar, Punjabi Mail is known for its Palak Paneer, as so is Gulshan Non-Veg Dhaba, Manni Vaishno Dhaba and Royal Touch. In Delhi visit Standard Punjabi Khana, Chicken Inn, Al-Jawahar and Kake Da Hotel. 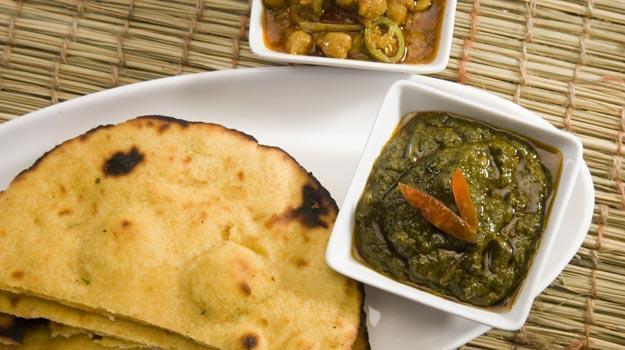 This delicious dish is eaten in the winters. Since mustard is grown abundantly in Punjab and other states in the north, it’s a favourite with the locals. As we know, it’s made up of mustard leaves and is usually eaten with cornmeal rotis. It is Priyanka Chopra’s favourite meal. In Jalandhar visit Haveli, and in Ludhiana try this dish at Bansi Vaishno Dhaba. In Panchkula try the sarson at Special Amritsari Kulcha and in Zirakpur try the dish in Lucky Dhaba and Sethi Dhaba. In Amritsar, head to Bharawan da Dhaba. In Delhi one must visit Pind Balluchi, Punjab Grill and Bikanervala. 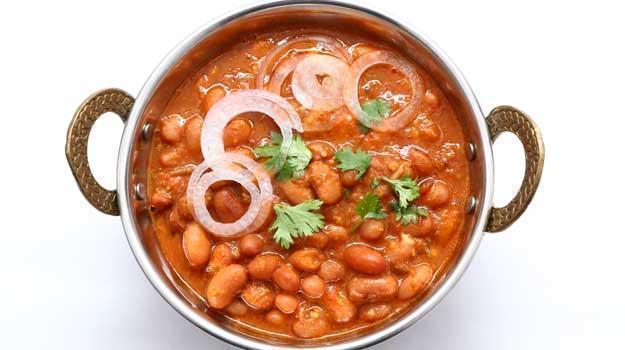 Rajma or Kidney Beans is grown in many parts of the world and is a staple diet in many countries. It is commonly consumed with rice across the world and this makes it one of the oldest dishes consumed. Eating rajma is really good for health and has many health benefits, including providing one’s body with energy due to its iron content. Simmering this dish carefully ensures that the flavours strengthen over a period of time and the rajma becomes soft enough to melt in your mouth. The Patiala A One Dhaba and Lark Chicken in Ludhiana serve delightful rajma that remind you of your mom’s homemade rajma. In Delhi try this dish at Baba Nagpal Corner, Kake da Hotel, Evergreen Sweet Shop, Sitaram Diwan Chand, Om Sweet and Snacks. In Chandigarh visit Katani Vaishno Dhaba. In Amritsar visit Bharawan da Dhaba and Brother’s Dhaba. 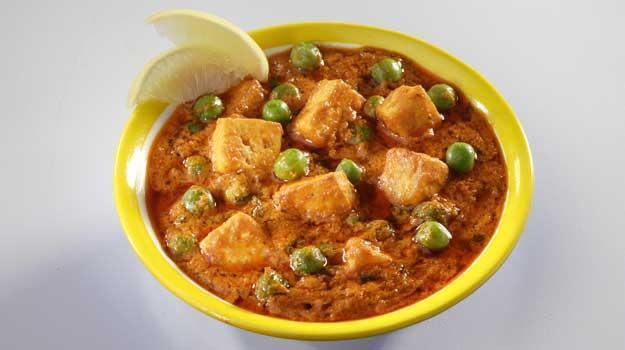 Eating mouthfuls of creamy paneer with pearls of peas is a sheer delight to many. If you have had the chance to eat paneer which is made in North India especially in Delhi, Punjab and other nearby regions, you will know just how smooth and creamy the texture of paneer truly is. Another wholesome and tasty dish that can be eaten with rice or rotis and parathas, it is one of the household favourites across the country. In Ludhiana, the Zimidara Dhaba has good paneer and peas. In Delhi try this dish at Kake Da Hotel, Park Balluchi, Gulati, Desi Vibes, and Moti Mahal. In Mohali try Pappaji Dhaba. The Kesar da Dhaba serves this tasty dish in Amritsar. 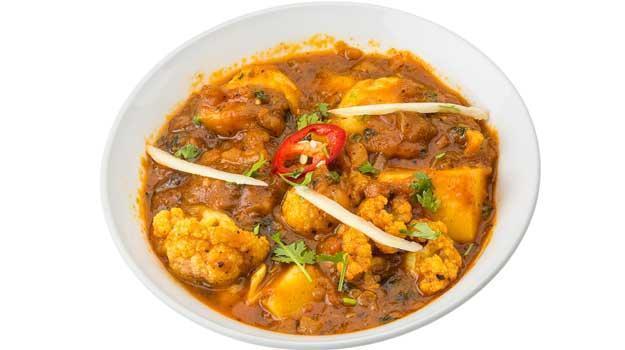 Two simple vegetables when married together in fragrant and flavourful spices, creates a mind-blowing experience to the palate. It is a humble dish that is another favourite across households in the country. It has many variations, each of which is equally delectable. This simple yet extremely flavourful dish is served in almost all restaurants and food joints across Delhi, Punjab and Chandigarh. 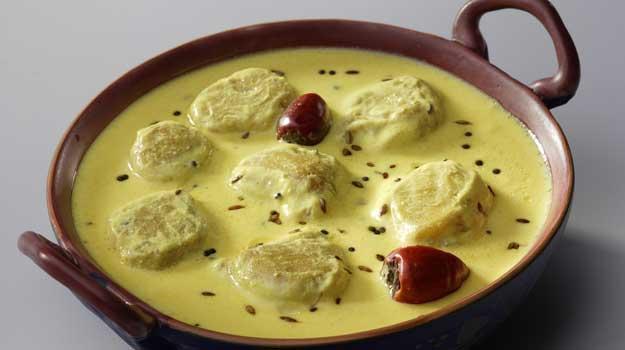 Though kadhi is made in many states, it also made in Punjab and is another staple. Made with dahi or yoghurt or buttermilk, it’s a simple dish and is easy to prepare. It has a tangy taste, is mildly spicy, and when eaten with pakoris (batter of gram flour fried in oil) it is nothing short of scrumptious. In Amritsar try the Kadhi at Kesar da Dhaba and Bharawan da Dhaba. In Ludhiana try this dish at Basant. In Delhi try to visit Shri Gurujaan Vaishno Rasoi, Govardhan, Sona Sweets and Gulati. 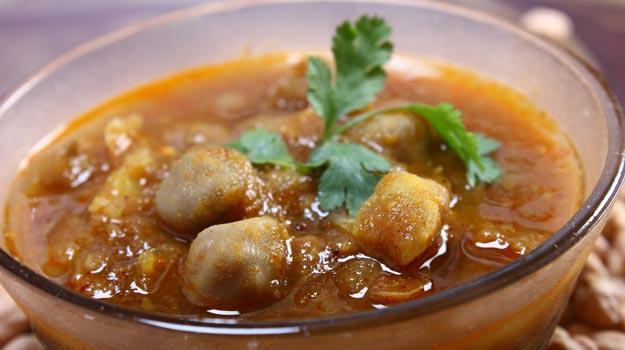 The chickpea or chole is probably one of the oldest crops because it has been around since 10,000 B.C. India contributes 70 per cent of the world’s production of chickpeas and is the most important pulse in the whole country. Chole Bature or Chola Puri is famous throughout India and can be found in most eateries. It is one of the most popular dishes in India. Brother’s Dhaba, Kesar da Dhaba, Bharawan Da Dhaba, Kanhaiya, Novelty Sweets, Munim Di Hatti and Anant Ram in Amritsar have good Chole. In Delhi try this at Baba Nagpal in Lajpat Nagar for some great Chola Batura, Bikanervala, Haldirams, Billi Di Hatti, and Sita Ram Diwan Chand. In Mohali and Chandigarh visit Sai Sweets, Gopal Sweets, Sindhi Sweets, and Vaishno Punjabi Dhaba. 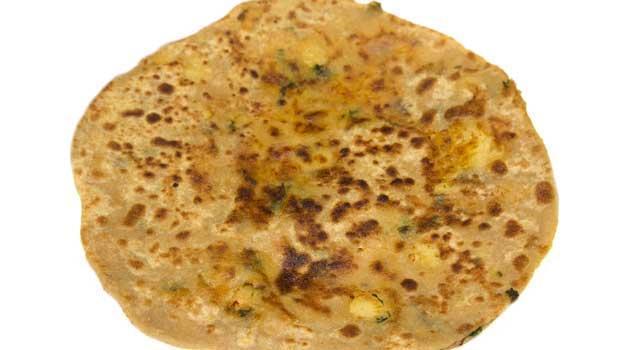 Need we say more? A perennial dish that can be eaten at any time of the day, or the year, it is a crowd-pleaser. Ensure you eat it with dollops of ghee or butter. In Ludhiana try the paranthas at Amit Veg Restaurant, Pandit Parantha Wala, Rishi Da Dhaba and Da Paratha Veg Restaurant. Lucky Vaishno Dhaba and Haveli offers good parathas in Jalandhar. Kesar da Dhaba and Bharawan da Dhaba in Amritsar have really good aloo paranthas. Chandigarh’s Pal Dhaba, Nukkar Dhaba, and Neelkanth Eating Corner are good options to savour this dish. In Delhi visit the famous Paranthe Wali Galli, Kake Di Hatti, and Pind Balluchi. 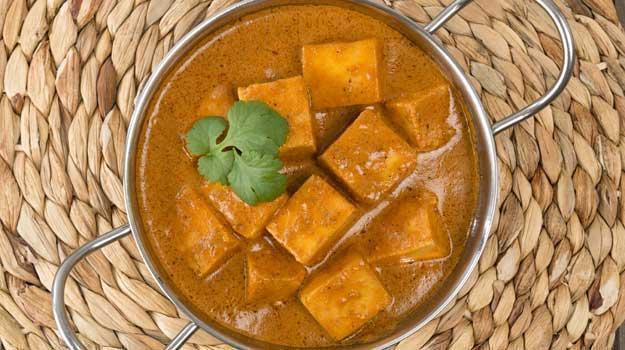 Another dish that has an incessant demand in all Punjabi and North Indian restaurants. It has minimal ingredients, but the flavor of this dish is heavenly. The generous quantities of butter that are added to this dish, boost its flavour and its smooth texture would make one swoon in delight! This dish is brilliant at Gulati, Desi Vibes, Moti Mahal, Pind Balluchi and Om Sweets. In Amritsar try it at Sanjha Chulha. Moti Mahal has its restaurants across Punjab and other cities in the country. 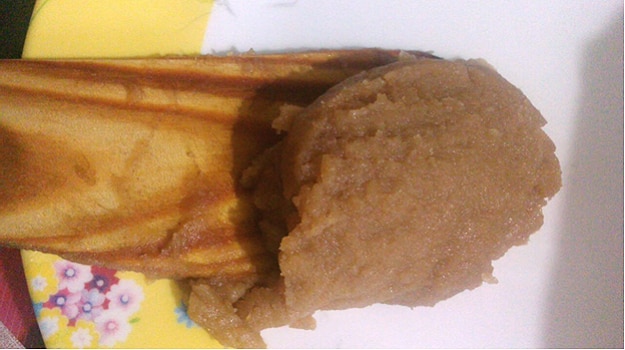 The famous Atte ka Halwa is loaded with ghee and sugar and one needs muscle power to constantly stir this dish for a long time, after which it turns into a gooey delight. Prepared in Gurudwaras and in homes, it is usually offered as Prasad to people. In Delhi make sure you visit the beautiful Gurudwara Bangla Sahib and taste the awesome Prasad. In Amritsar a visit to the Golden Temple is obvious but the Prasad here is to die for! Most Gurudwara’s give this Prasad and it is a must-try. Or you could always request your family, relatives, friends, neighbours and even acquaintances who are Punjabi to make this sinful dessert.