Almost everyone loves dolphins. Even the deadly Killer Whale is a dolphin! If you had to give dolphins a synonym or two, it would definitely be intelligent & genial. In Greek legends the dolph 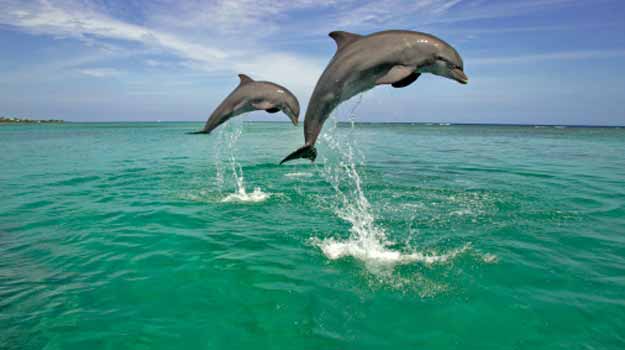 Almost everyone loves dolphins. Even the deadly Killer Whale is a dolphin! If you had to give dolphins a synonym or two, it would definitely be intelligent & genial. In Greek legends the dolphin was the favourite pet of Apollo. Even Odysseus (who had the brainwave of creating the Trojan Horse which led the Greeks to destroy Troy) had dolphins inscribed on his shield, the pommel of his sword and even his ring. The famous ruins of Delphi in Greece were named after the dolphin. The documentary, The Cove won the Oscar and other multiple awards. It showcased the massacring of dolphins in Taiji in Japan. The Faroe Islands is where dolphins are also massacred due to certain traditions. All over the world these endearing mammals are growing critical and endangered. In India, the dolphin is said to be Gangaji’s vahaan or vehicle. In 2009, the dolphin was declared as India’s national aquatic animal by the National River Ganga Basin Authority. Efforts are on to try and save these precious creatures from becoming extinct in our country. Dolphin spotting is popular across the world and in our country too. It’s a good recreational activity. However, if we are able to combine it into an educational and informational activity for people of all strata of society, then it would help in creating awareness in terms of trying to save the dolphins. A list of some places across India where one can spot dolphins is mentioned below. Also Read - Aryan Khan Case Highlights, Wednesday, Oct 27: No Bail For Aryan, Court Adjourns Hearing to Thursday

1. West Bengal – The Sunderbans are home to many Gangetic & Irrawaddy Dolphins. Usually the dolphins prefer to breed in the mangroves but in 2013, many people were lucky to spot a baby Gangetic Dolphin in the Hooghly River in Kolkata, a truly rare occurrence! In Tajpur too, one can try their luck at catching sight of the dolphins. Also Read - LIVE ENG vs BAN T20 World Cup 2021 Live Cricket Score, T20 Live Match Latest Updates: Buttler Departs; Bangladesh Dent England's Breezy Start in 125 Chase in Super 12 Battle

2. Maharashtra – To find the perfect location for dolphin sighting, one can head to Dapoli, which is roughly 235 kilometres from Mumbai. In and around Dapoli are beaches for glimpsing these affable screatures such as Murud Beach & Karde Beach. Other places are the Tarkali Beach, Harihareshwar, Dabhol Port, Kuravde Beach, & Ladghar Beach.

3. Goa – It comes as no surprise that dolphins can be spotted here. Boats can be hired from various beaches in both North & South Goa. Even local fishermen can be coaxed into taking you out to sea to spot dolphins. There are river boat cruises available which drift through the Mandovi, Sal & the Chapora Rivers, & if one is lucky they can spot dolphins in these waters. 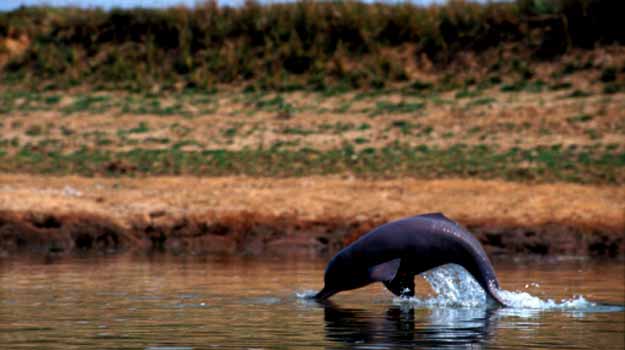 4. Orissa – Satpada Chilka Lake – This is the most popular place to view dolphins in Orissa. The highly endangered Irrawaddy Dolphins have finally started showing signs of flourishing slowly, but steadily. They now number more than 150. The lake is supposed to be the largest brackish water lagoon in Asia.

5. Lakshadweep – Lakshadweep consists of countless islands. Some of the islands from which one can watch dolphins by sitting on the beaches or hire boats are; Agatti, Kadmath, Bangaram (and the uninhabited islands near it). Even when one is on the ship from Kochi to Lakshadweep, dolphins can be seen.

6. Karnataka – Places in Karnataka to spot dolphins are on Karwar beaches such as Devbagh, Kurumgad Island; other places are Gokarna beach & Murudreshwar Beach & Kapu Beach.

7. Kerala – With a coastline of nearly 600 kilometres, dolphins have been spotted off the coasts of many beaches. Some of the beaches where one can spot dolphins are; Cherai, Valparai, , Ettikulam Bay (Kannur), Ezhimala, Calicut & Beypore Beach. 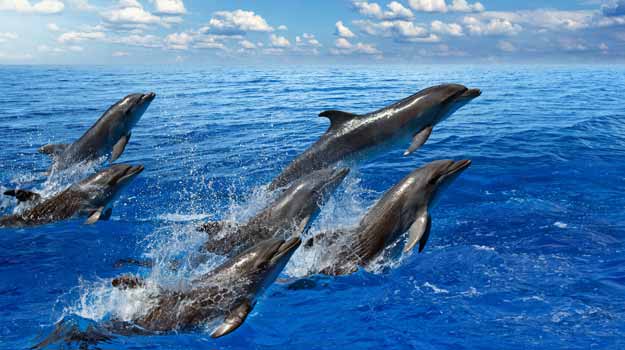 8. Tamil Nadu – While in Pondicherry, one can admire the legacy left behind by the French, but a visit to the various beaches such as Paradise beach should be included. Here, there are boats available which will take you dolphin spotting or one can simply sit by the beach and catch glimpses of dolphins diving in and out of the waters. On Rameshwaram beach there are chances of spotting dolphins. Dolphins have been seen along the coast of Point Calimere Wildlife Sanctuary & the Gulf of Mannar National Park.

9. Gujarat – Dolphins are sometimes spotted off the coast of Diu. India’s first Marine Wildlife Sanctuary & Marine National Park was established in the Gulf of Kutch. While an amazing variety of marine life abounds here, there are also chances of glimpsing dolphins. From the Okha Port, there are boats available that take you to an island called Beyt Dwarka. This island has a religious significance, but one part of it has a place called Dunny Point from where one can see dolphins. The Gulf of Kuchh National Park too is home to some species of dolphins.

10. Andaman & Nicobar – The Andaman & Nicobar Islands are made up of roughly 570 islands. Make your way to Lalaji Bay Beach on Long Island, Jolly Buoy located in the Mahatma Gandhi Marine National Park, Havelock Island, the North Button Island National Park, the South Button National Park, Red Skin Island, & Neil Island. One can go in for scuba diving or snorkeling in locations such as Corruption Rock (South Andaman Islands); Johnny’s Gorge, Inket Wreck & Mystery Mountains, all of which are around Havelock. 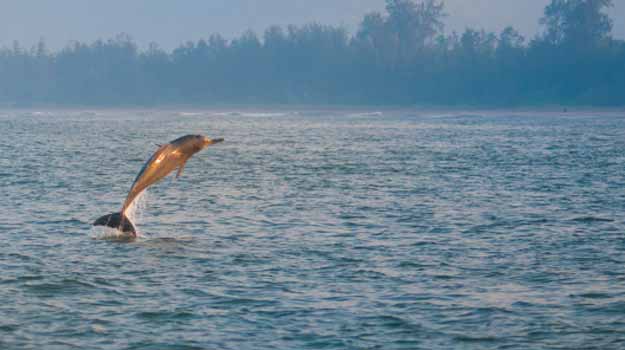 11. Punjab – The Harike Wildlife Sanctuary as well as the river Beas have seen a rise in dolphins, especially in the areas between Harike and Beas town.

12. Uttar Pradesh – The National Chambal Wildlife Sanctuary spans across three states; U.P, M.P & Rajasthan. Dolphins have been spotted in the Chambal River.  Swimming is not advisable here because the river is infested with crocs and gharials. A joint survey was conducted by WWF, the U.P Forest Department and other NGOs’ to establish the current numbers of dolphins the state. The campaign was called ‘Save Ganga, Save Dolphin’ and following this survey, initiatives have been created to help protect the dolphins. The Gangetic Dolphin has been nicknamed the ‘The Tiger of the Ganges’ because its importance to the marine ecosystem which mirrors the importance of the tigers to the land ecosystem. One can spot dolphins in the Dudhwa Tiger Reserve. Dolphins are found in the upper Ganga from Bijnore to Narora, Gerua River in the Bahraich’s Katerniaghat Sanctuary. Other rivers where dolphins can be seen are; Ghaghra & Gandak, Ganges (from Varanasi to Patna), Saryu in Ayodhya, Rapti & the Sone (which flows through many states). Other places include Hamirpur, Banda, Garhmukteshwar, Ekdala in Fatehpur & Chilla.

13. Bihar – Vikramshila Gangetic Dolphin Santuary is where many dolphins can be found. Of the 2000 (approximate) Gangetic Dolphins in India, around 1,300 are found in Bihar. The Ghaghra & Gandak Rivers, Ganga River near Patna where tourists can take a boat ride from Gandhi Ghat Khajekalan Ghat, as well as the confluence of the Ganga and the Gandak River & a place called Fatuha. Other rivers such as Sone, Kosi, Brahmaputra, Mahananda & Kamala which flow through Bihar is where dolphin surveys have been conducted.

14. Assam – The Dibru Saikhowa Wildlife Sanctuary & the Brahmaputra River near Tezpur is where dolphins can be seen leaping about in search of prey.

There are other states such as Rajasthan, across some rivers in North East India & Madhya Pradesh where dolphins have been spotted. However, we must keep in mind that these beautiful, gentle and friendly creatures are struggling to survive because of rampant poaching, dolphin meat being sold openly in coastal areas, being accidently killed due to the sheer ignorance with which our fishermen catch their prey & parts of their bodies being used as fishing bait. Many NGO’s are doing their best to assist various forest authorities in creating awareness at all levels of society and to boost protection efforts for dolphins. It is up to us to stop the slaughtering of the creatures or future generations will only be seeing photos of them instead of actually admiring them up close in their natural habitats.