Durga Puja 2017: Famous Durga Puja Pandals In Kolkata That Are Too Iconic to Miss

With Durga Puja 2017 coming up in a little more than a week, it's time to block a few days in your calendar and head to these incredible Durga Puja Pandals in Kolkata. If you haven't been to these Pandals, your Durga Puja in Kolkata would be incomplete.

Durga Puja is going to come to Kolkata, and the rest of the country, on September 26, 2017, running all the way up to September 30, when the goddess will take her leave and her idols will be immersed in the rivers and ocean. And everyone knows that no other place celebrates Durga Puja like Kolkata. With hundred of Pandals across the city, long queues, chaos in the streets and the smell of kathi rolls and chops in the air, the experience of Kolkata during Durga Puja is something else. Bengalis from all around the world come to the city, reuniting with their friends and family to celebrate the festival in the traditional way. And what better way to experience Kolkata this time of the year than by visiting its most famous Pandals. While artisans are hard at work crafting the Pandals and Durga idols this year, we look at some of the most iconic Durga Puja Pandals In Kolkata you cannot miss out on. ALSO READ: Durga Puja 2017 celebration in Kolkata: 5 Things You Must not Miss in Kolkata during Navratri 2017 Also Read - Navratri 2020 Day 5, March 29: Worship Maa Skandamata; Know Puja Vidhi, Fast Time, Mantra 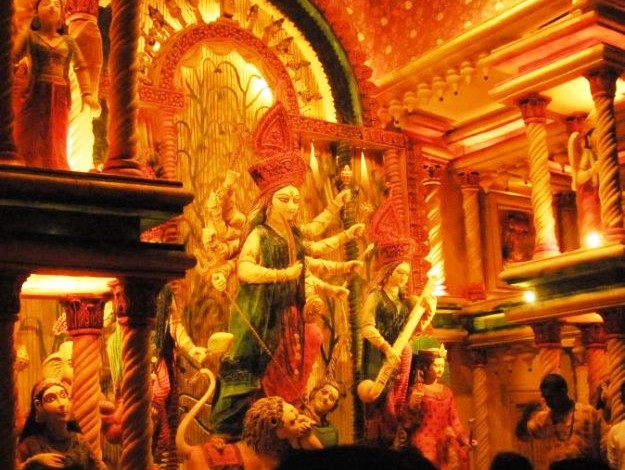 Let’s start with what is one of the oldest and most iconic Durga Puja Pandals In Kolkata: the one at the Badamtala Ashar Sangha community center in Kalighat, Kolkata. More than 75 years old, the Pandal has drawn big crowds in recent years with its creative Pandal and idol designs. It even won a creative excellence award seven years ago. We’ll have to wait and see the design and theme of the Badamtala Ashar Sangha this year. Also Read - Navratri 2020 Day 4, March 28: Worship Maa Kushmanda; Know Puja Vidhi, Fast Time, Mantra 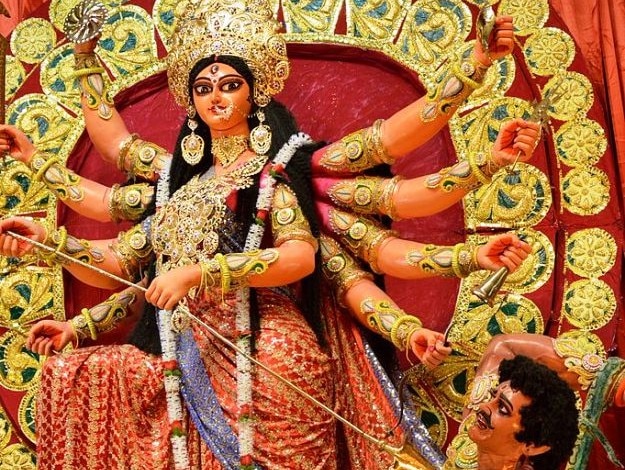 Located in Ballygunge, Kolkata, the Ekdalia Evergreen Durga Pujo Club has been around since 1943, so it has a rich heritage going for it. Over the years, the Pandal has replicated some of India’s most famous temples and used other more outlandish themes, like a German village back in 2011 and a prehistoric earth theme, complete with dinosaurs, in 2015. The idol itself, however, remains unchanged and simple in design. Head to the Pandal to see what theme they’ve cooked up this year and see the iconic Durga idol. CHECK OUT: Durga Puja: How and where is Durga Puja celebrated? Also Read - Bhojpuri Hot Bomb Monalisa And Hubby Vikrant Singh Rajpoot Twin in Pink as They Wish Their Fans 'Shobho Bijoya' 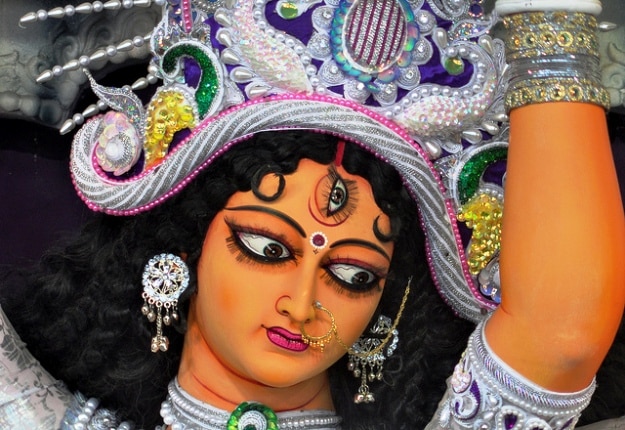 Kumartuli Park or Kumartali Park is home to another prominent Pandal during Durga Puja. It’s not that old – just a little over two decades – but its Pandal and idol is designed the old-school way. Kumartuli is, after all, where the legendary clay artisans of Durga idols live. Some of the grandest idols you see across the city come from this locality, and it is only natural that the Durga idol here is as grand and beautiful as it gets. Located near the Sovabazar Ferry, the Pandal brings in huge crowds every year, drawn by the level of artistry and artisanship on display. 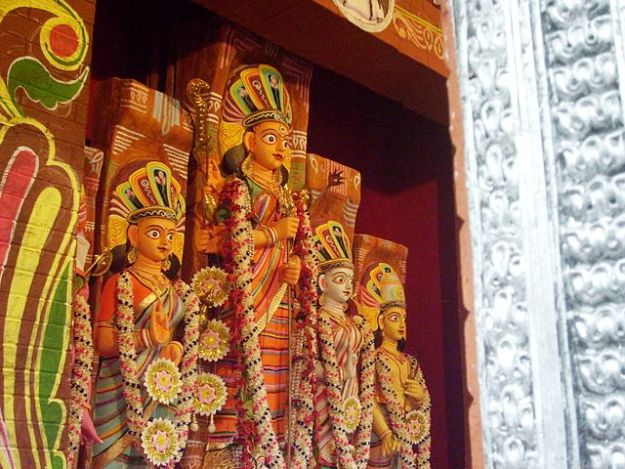 Located near the heart of the city, the Lake Town Adhibasi Brinda is more than half a century old and is a good place to visit if you want something other than massive artificial structures. This Pandal forgoes the usual practice of erecting large structures and instead focuses on a more grounded celebration. Still, you can find cultural programs like song and dance being performed here, along with charity events and social gatherings. ALSO READ: Durga Puja 2017: Famous Durga Puja Pandals in Bangalore to Visit This Year 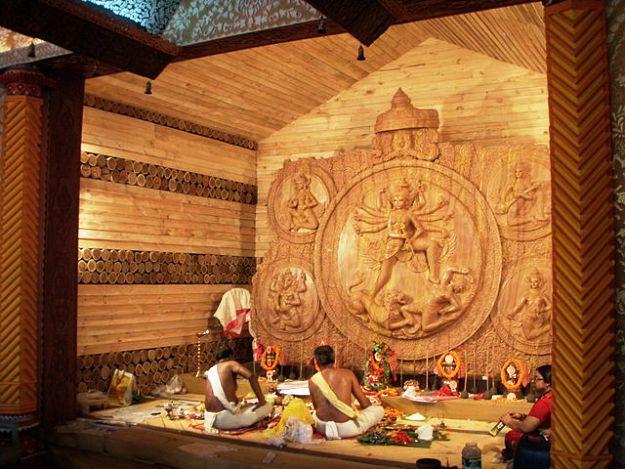 Speaking of cultural events and activities, there’s one other Durga Puja Pandal in Kolkata to visit if they fascinate you: Suruchi Sangha in New Alipore. The Pandal is designed after one Indian state every year, and it’s won the award for best decorated Pandal in 2003 and 2009, so expect some incredible sights when you visit it this year as well. We wonder what state the Suruchi Sangha Pandal will showcase this year, or if it will opt for a different theme altogether. CHECK OUT: Durga Puja 2017: Famous Durga Puja Pandals in Pune to Catch This Year 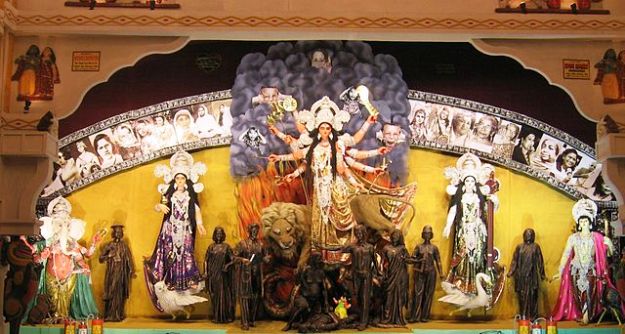 The famous Mohammad Ali Park Durga Puja Pandal usually showcases miniatures of famous monuments around the world. It also has some out-of-this-world themes; back in 2015, it had an African Safari-themed Pandal. Unique themes aside, the beautiful architecture here and the style of the idol are also worth seeing here. NOW READ: Navratri 2017: Best Places To Visit During Navratri and Durga Puja 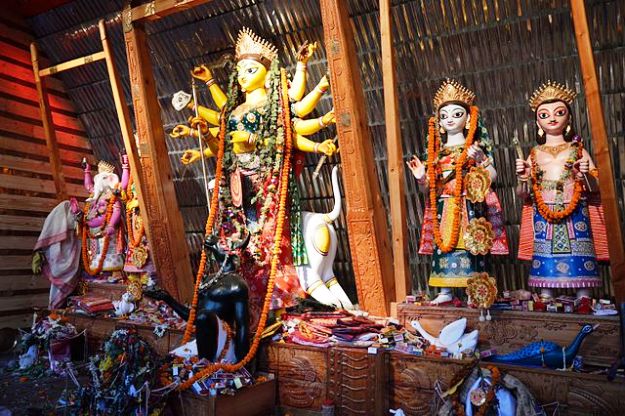 Finally, we have another old, award-winning Pandal at the Bose Pukur or Bosepukur Sitala Mandir in Kasba. With incredible artwork and some amazing and innovative themes over the more than 60 years that it has been organized, the Bose Pukur Sitala Mandir Pandal is definitely worth a visit. The Pandal often has themes associated with rural Bengal. It has been around since 1950, which makes this its 67th year.