The Ellora caves are a confluence of Hindu, Jain and Buddhist ways of life. 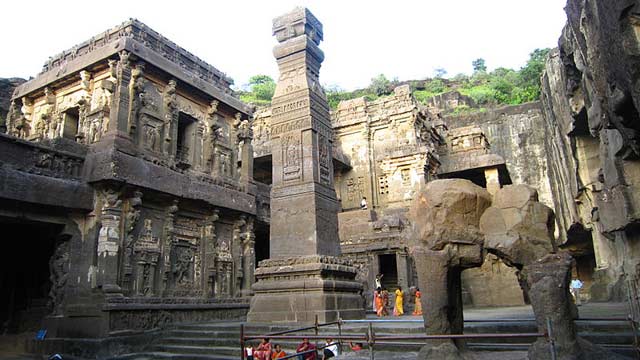 Lying in the lap of the Chamadari hills, the Ellora caves epitomize the zenith of Indian rock-cut architecture. As many as 34 caves extol the glories of Buddhist, Hindu and Jain mythology and philosophy.

Built by the Rashtrakuta dynasty between the 5thcentury and the 10th century, the Ellora caves are a confluence of Hindu, Jain and Buddhist ways of life.

Situated 18 miles northwest of Aurangabad in Maharashtra, the Ellora caves were declared a World Heritage Site. It took over five centuries for the Hindu, Buddhist and Jain monks to chisel out the caves and decorate them with remarkable imagination and detail.

The first 12 caves were built during the 5th-7th century. The earliest Buddhist cave is cave 6 while caves 11 and 12 were the last. All the Buddhist caves were constructed between 630 AD and 700 AD.

The Buddhist caves consist mostly of viharas or monasteries: large, multi-storeyed buildings carved into the mountain face. Some of the caves have carvings of Gautama Buddha, bodhisattvas and saints. 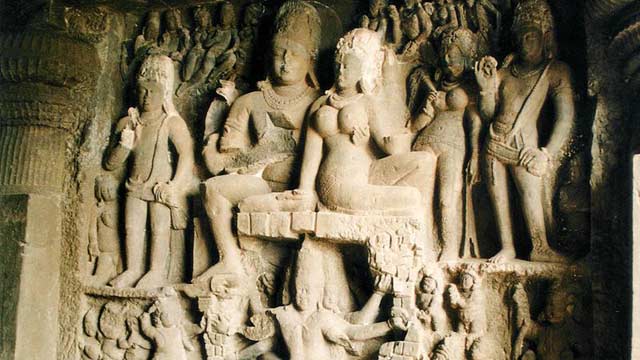 Most famous and the only chaitya griha amongst the Buddhist caves, it is locally known as Vishvakarma or “Sutar ka jhopda” (carpenter’s hut). At the front is a rock-cut court, entered through a flight of steps. On either side are pillared porticos with chambers to their rear.

In the chaitya hall is a stupa on which a colossal 3.30 m high Buddha sits in teaching posture. A large Bodhi tree is carved at the back.

The Hindu caves were constructed between the middle of the sixth century to the end of the eighth century. Caves 29 and 21 constructed in the early phase are the most impressive.

The 16th cave is one of the audacious feats in architecture ever achieved. The idea was to build the abode of Lord Shiva, Mount Kailash, from a single piece of rock. Hence it got its name, Kailasa or the Kailasnatha.

Construction entailed removal of 200,000 tonnes of rock and took 100 years to complete. The temple, started by Krishna I of the Rashtrakuta Dynasty, is a splendid achievement of Dravidian art.

A two-storey gateway opens to reveal a U-shaped courtyard that is edged by columned galleries. Within the courtyard are three structures: first is the image of the sacred bull Nandi. The central temple or the Nandi Mandap houses the lingam. The base of the Nandi Mandap has been carved to suggest that life-sized elephants are holding the structure aloft. A living rock bridge connects the Nandi Mandap to the Shiva temple behind it. The temple itself is a tall pyramidal structure reminiscent of Dravidian temples. The grand sculpture of Ravana attempting to lift Mount Kailasa, the abode of Lord Shiva, with his full might is a landmark in Indian art. 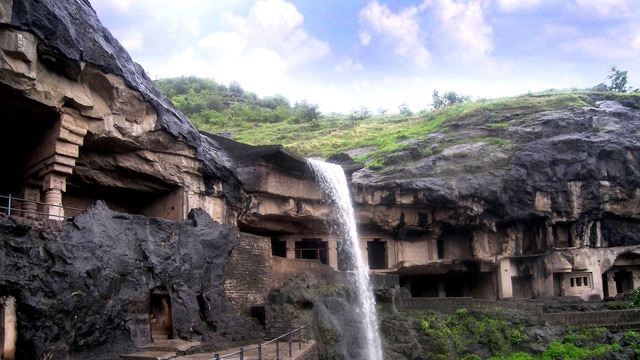 The Dashavatara: Cave 15 has an open court with a free-standing monolithic mandapa at the middle and a two-storey excavated temple at the rear. Large sculptural panels between the wall columns on the upper floor illustrate a wide range of themes, which include the ten avatars of Vishnu and hence, the name Dashavatara.

The other famous Hindu caves are the Rameshvara (Cave 21), which has figurines of river goddesses Ganga and Yamuna at the entrance and the Dhumar Lena (Cave 29) whose design is similar to the cave temple on Elephanta Island near Mumbai. Two other caves, the Ravan ki Khai (Cave 14) and the Nilkantha (Cave 22) also have several sculptures.

The five Jain caves at Ellora belong to the ninth and tenth centuries and they all belong to the Digambara sect. The caves reflect a strict sense of asceticism and are not as large as other caves. The most remarkable Jain shrines are the Chhota Kailash (cave 30), the Indra Sabha (cave 32) and the Jagannath Sabha (cave 33).

The Indra Sabha is a two-storey cave with a monolithic shrine in its court. It got the appellation “Indra Sabha” probably because it is significantly ornate and also has the sculpture of the yaksha (dedicated attendant deity) Matanga on an elephant, which was wrongly identified as that of Indra. On the upper level of the double-storied shrine excavated at the rear of the court, an imposing image of Ambika, the yakshini of Neminath, is found seated on her lion under a mango tree, laden with fruits. 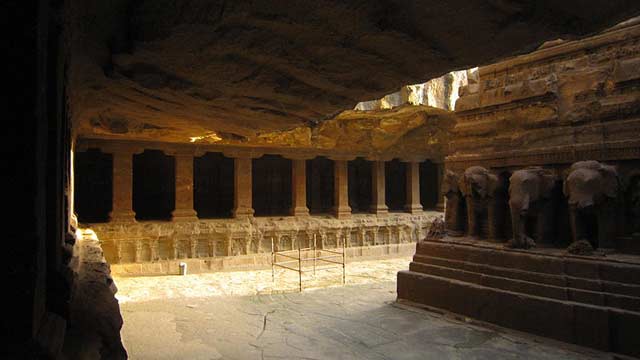 Aurangabad, 18 miles away, is the nearest airport and railhead for Ellora. Aurangabad is well-connected with the rest of the country by flights, trains and roads.

Hotels catering to all kinds of budgets are available at Aurangabad. Quality accommodation options are also available near the Ellora caves.

Ellora caves are open for visitors from 9 am till sunset and are open on all days of the week except Tuesdays.