Everything You Need to Know About The Rock Garden of Chandigarh

If you are one of those who love visiting gardens, you must visit the Rock Garden of Chandigarh. 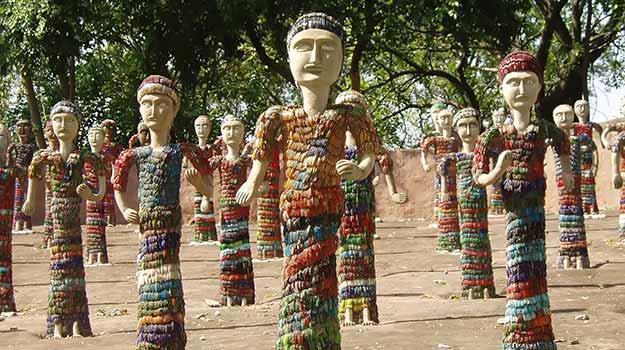 Gardens are special. Since childhood, we develop an unexplainable love for gardens. And if you are one of those who love visiting gardens, you must visit the Rock Garden of Chandigarh. Heres everything you should know about this garden.

The Rock Garden is a sculpture garden in Chandigarh. It is also known as Nek Chand’s Rock Garden after its founder Nek Chand, a government official who started the garden secretly in his spare time in 1957. The garden is spread over an area of forty acres (160,000 sq.m.). What’s interesting about this garden is the fact that it’s entirely built of industrial and home waste and discarded items. Sculptures are made using bottles, glasses, bangles, tiles, ceramic pots, sinks and electrical waste. Apart from sculptures, this garden also has man-made interlinked waterfalls.

It’s said that Chand began collecting waste material from demolition sites around Chandigarh. He then recycled these materials into a vision that he had of a divine kingdom of Sukrani. He chose a gorge in the forest near Sukhna Lake to carry out the recycling. The gorge had been designated as a land conservancy, a forest buffer established in 1902 that nothing could be built on. Chands work was illegal but it was well-hidden from the authorities for 18 years, before it was discovered in 1975. By then, it had grown into a 12-acre complex of interlinked courtyards, each filled with hundreds of concrete sculptures of dancers, musicians and animals. Chand’s work was on the verge of being demolished but he got public opinion on his side.

In 1976, the park was inaugurated as a public space. What more! Nek Chand was given a salary, title and 50 laborers to work on the Rock Garden. The garden is still made out of recycled materials and Chand has even set up collection centres around the city for collecting waste materials.

The garden is visited by over 5000 people daily! So, when will you be one of them?