These 5 cities in Russia are great attractions to visit, even after FIFA World Cup 2018.

Russia is about to get crowded from June to July when soccer fans from all over the world head to the country to catch the 2018 FIFA World Cup. The premier football event may be the reason why many are travelling to Russia for the first time, but the worlds largest country has plenty to offer regardless of the World Cup. (ALSO SEE 21 Majestic Photos of St. Petersburg Will Leave You in Awe of This Russian City) Hotels.com shines a spotlight on three World Cup host cities Kaliningrad, Nizhny Novgorod and Kazan  situated near to the countrys bustling capital, Moscow, that are worth a visit even after the World Cup. It also sheds some light on the two most popular cities of the country. Also Read - Coronavirus Enters New Stage in Moscow, Says Mayor Sergei Sobyanin 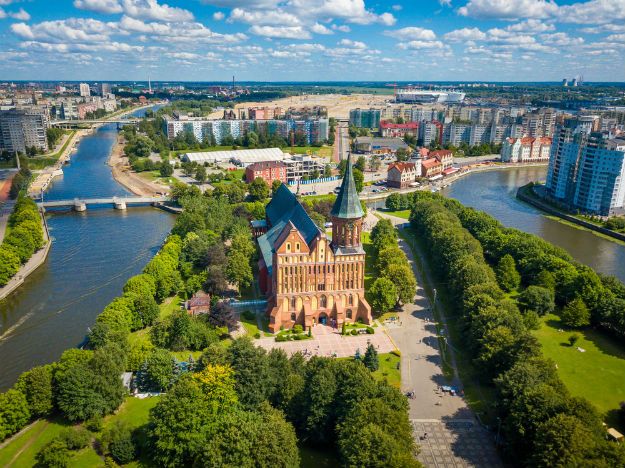 Sandwiched between Poland and Lithuania, Kaliningrad is a Russian exclave with a unique location and a rich history. Previously a restricted military zone during the Soviet period,the ancient city was founded by the Teutonic Knights in 1255 and was once part of East Prussia over 700 years ago. Moreover, it is the countrys only port that stays ice-free all year round. Also Read - Vote on Russia's Constitutional Reform Postponed Due to Coronavirus Crisis, Says Putin

 The Königsberg Cathedral that was built in the 14th century and is an important remnant of the Prussian city.
 In a corner of the Cathedral is the tomb of German philosopher Immanuel Kant, one of the citys most famous residents.
 Kaliningrad is also known as Amber City: around 90 percent of the worlds amber deposits are located there. Visit Russias first and only Amber Museum in the city to learn more about the stunning natural resource.
 Curonian Spit, a narrow strip of sand dunes, beautiful beaches and pine forests. The natural wonder is also a UNESCO World Heritage Site.

Hit the town without hitting your wallet. Conveniently situated in the heart of the city, right on the Pregolya River, this modern hotel stands in contrast to the gothic Konigsberg Cathedral, located just a stones throw away. Many of the citys landmarks and museums are accessible from the hotel within 15 minutes on foot.

Kaliningrad may have once been a Cold War outpost  but youll be sure to find peace and warmth within the Crystal House Suite, Hotel & Spa. Step inside and youll findwelcoming, spacious rooms with chic, minimalist decor. You can also take a relaxing dip in the hotels indoor pool, or unwind in the spa. 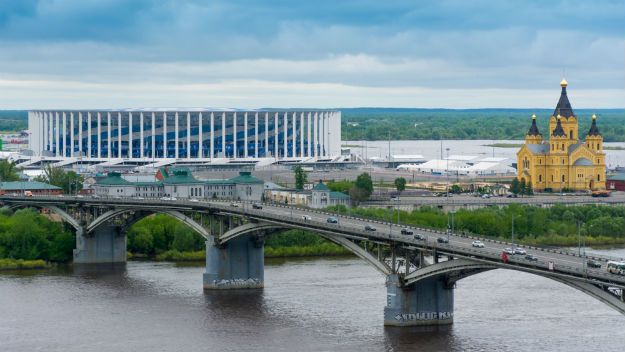 Situated 400km east of Moscow is Nizhny Novgorod, one of Russias oldest and most militarised zones. The city was closed off to foreigners during the Soviet period and was formerly known as Gorky, after the famous Soviet writer Maxim Gorky. Today, Nizhny Novgorod has established itself as a key commerce and cultural hub in Russia with a variety of historical and natural sites.

 The city has its own Kremlin that was built on the confluence of the Volga and Oka rivers, and offers visitors stunning birds eye views of the cityscape. Look out for the Eternal Flame monument in honour of those who died during World War II.

 The Church of the Nativity of the Blessed Virgin Mary will take your breath away with its fairytale-like architecture, bold colours and ornate onion-shaped domes.

 Take a leisurely stroll along the central street of BolshayaPokrovskaya, lined with picturesque 19th-century buildings. The area is the perfect spot to look for souvenirs, rub shoulders with the locals and grab a bite.

 The Chkalov Staircase is a remarkable sight, even though it is basically an extremely long flight of stairs  560 steps to be exact. The longest flight of stairs on the banks of the Volga river, it is considered a monumental landmark of the Soviet era and cost almost 8 million rubles to build.

A blend of contemporary and quaint architecture  theMinin Hotel offers comfortable and affordableaccommodation in the city centre. TheNizhin Novgorod Kremlin is just a short walkaway, as area variety of excellent museums and galleries.

With its monumental architecture, the stylish and luxurious Sheraton fits in perfectly with the historic Nizhny Novgorod Kremlin, which it neighbours. You can even choose rooms with views of the Kremlin or Minin Square.

Founded in 1005, Kazan is one of Russias oldest cities. It is the capital of the Republic of Tatarstan and represents a confluence of Eastern and European cultures. Over 100 nationalities call Kazan home and the city is a wonderful example of how different ethnicities and religions can reside peacefully together.

 Begin your tour of Kazan at its Kremlin, the only surviving Tatar fortress in Russia that consists of a number of historical buildings dating back to the 10th century. Within the Kremlin stands the resplendent Kul Sharif Mosque, where visitors can learn about the history of Islam in the Volga region.

 Pay a visit to the Temple of All Religions, a multi-faith centre that reflects the motifs of various religions including Christianity, Islam, Hinduism, Buddhism and Judaism.

 If you relish unusual experiences, check out the Soviet Lifestyle Museum, a kitschy boutique gallery packed with memorabilia from the Soviet Union including a cockroach trap.

 Hang out with the locals at the Central Market, which offers the authentic atmosphere of a Tatar bazaar. Bargain with babushkas and get a taste of the local fare at the market where you can buy fruits, vegetables and souvenirs at lower prices.

Save: Shalyapin Palace Hotel
Housed within a restored 19th-century building, the charming décor of Shalyapin Palace Hotel will have you feeling like royalty  without having to pay a princely sum! Amenities available include an indoor pool, a fitness centre and a sauna, and the hotel is located in the city centre.

Stay at the LUCIANO Residence Kazan if great amenities are what you seek. This centrally located hotel boasts a full-service spa, an excellent swimming pool with a whirlpool area and even a hair salon. With its central location, you never have to walk far to explore Kazans sights. 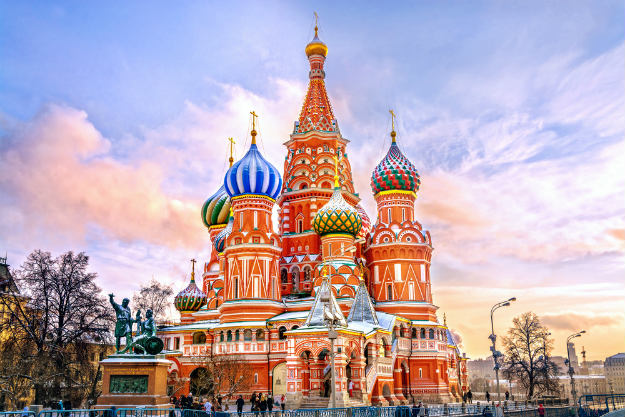 A favourite destination in Russia among tourists, Moscow is a must-visit for any first-timer to the country. Russians capital is a vibrant mix of history, culture, art, and modernity with plenty to see, considering how massive the sprawling city is; Moscow is home to over 130 nationalities and 12.3 million residents.

Moscows Kremlin (a citadel within a Russian city) is packed with architectural beauties and historical landmarks. There is the Armoury Chamber, which houses a collection of tsarist weaponry and items accumulated by past Russian rulers, as well as the many cathedrals including the Cathedral of the Assumption, the oldest church in the Moscow Kremlin.

 The Red Square is where one of Russias most Instagrammed attractions, St Basils Cathedral stands. Delve deep into the significance behind the cathedrals colourful onion domes or pay a visit to the Lenin Mausoleum for a macabre experience.

 Catch a romantic ballet performance at the stunning Bolshoi Theatre, the countrys most famed arts venue.

 Situated at a depth of 65m underground is Bunker-42, a museum-cum-entertainment venue that will bring you back in time to the Soviet era where the threat of nuclear annihilation was a very real possibility.

Dont be deterred by the Moscow Holiday Hotels palatial architecture and décor  stays here start from just $50 a night. Attractions such as Arena CSKA, Red Square and St. Basils Cathedral are accessible within 40 minutes by Moscow Metro.

One of Moscows Seven Sisters, a group of skyscrapers built in the Stalinist architectural style, the Hilton Moscow Leningradskaya was built in the 1950s. Lavishly furnished and conveniently located near the heart of the city, the Hilton is perfect for those looking to bask in Moscows historic vibe. 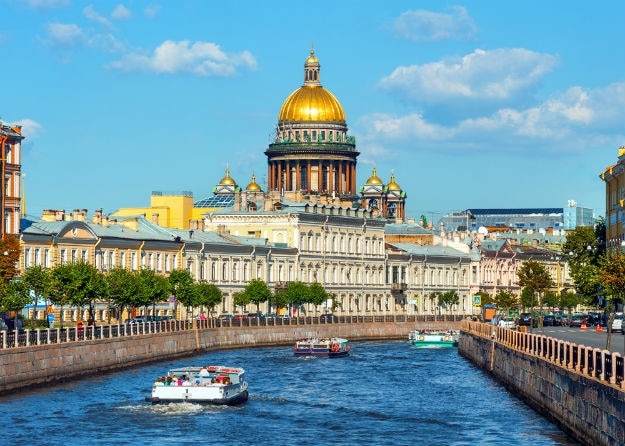 Another top Russian destination for tourists is Saint Petersburg, the countrys imperial capital. Art, history, architecture and culture  the city has it all.

 The Hermitage Museum is a must-visit on your itinerary if you are eager to learn more about Russias art and culture. It was built in 1764 as a private collection of the Empress Catherine the Great and holds a jaw-dropping 3 million items spread over several buildings, some equally as stunning as the works of art themselves.

 The Church of the Saviour on Spilled Blood might raise some eyebrows with such an eerie title, but trust us, its name belies the churchs exquisite charm. The Church is currently under restoration but visitors can still marvel at the outstanding mosaic collection found in its interior as well.

 You cant miss Saint Isaacs Cathedral when in Saint Petersburg; its the one with the massive gold dome. Altogether, 100 kg of pure gold were used for the main dome and smaller domes gilding. Climb 262 steps to the cathedrals colonnade for magnificent panoramic views of the city.

 The city is unofficially called the Venice of the North because of its many canals and rivers, so it is only fitting to go on a boat tour at least once to take in the sights.

Situated between a canal and a river, the Kravt Hotels quaint décor matches the historic heritageof Saint Petersburg, making perfect company for the cathedrals, churches, museums andfortresses in the vicinity.

Spacious, luxurious and centrally located  a full suite of amenities await guests at the Petro Palace. Unwind with a leisurely swim, work out in the fitness centre or enjoy Italian cuisine with a view on the uppermost floor.