The expansive Jaisalmer Fort and its narrow lanes have some fascinating facts hidden in them.

Jaisalmer Fort is, in many ways, the very definition of the word ‘epic’. This is not simply one of India’s several World Heritage Sites; it is also one of the few fully-preserved fortified cities worldwide. It is also a ‘living fort’, with thousands living within its walls and earning their livings through the fort’s numerous shops, restaurants and temples. The fort has stood for centuries atop Trikuta Hill, jutting out majestically towards the sky amidst the flat sandy expanse of the Thar desert. Over these centuries, the fort’s massive walls and narrow streets have been witness to historical events many of which you may not be familiar with. Here is a look at 5 facts you probably did not know about the Jaisalmer Fort. Also Read - Coronavirus: Biggest Single-Day Jump of 8,380 Cases Takes India's Tally Beyond 1.82 Lakh; Death Toll Crosses 5,000 | Key Points 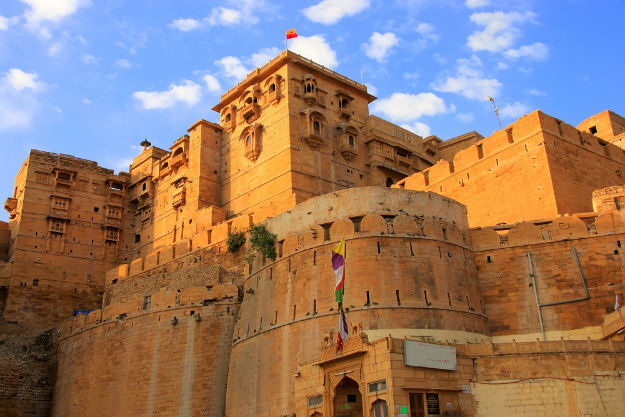 One of the first things that you notice about Jaisalmer Fort when you see it, even from a distance, is its architecture. The fort was built in 1156 CE, by the founder of the city of Jaisalmer himself, Rawal Jaisal. It began as a much smaller mud fort over Trikuta Hill, but was built by subsequent rulers and occupiers of the fort. More than a century later, in 1276, King Jetsi strengthened the fort by adding bastions. Alas, the extensive work undertaken by Jetsi turned out to be in vain. After an eight-year siege, the Sultan of Delhi was able to take over the fort, heavily damaging it in the process. Over the years, Jaisalmer Fort has seen heavy expansion and repair work by the hands of both Rajput and Muslim artisans. The result is a rather subtle but fascinating mix of the architectures of both cultures. ALSO READ: Top 5 palaces in Rajasthan that you can stay in
Also Read - Delhi Secretariat Department Sealed as Official Tests COVID-19 Positive

Jaisalmer Fort was prophesised by Krishna

Let’s take a look back at the founding king of Jaisalmer himself, Rawal Jaisal. The eldest son of the ruler of Deoraj, Jaisal was passed over for the throne in favour of his half-brother and was exiled from the kingdom. He eventually made his way to Trikuta Hill, where it is said that he met Eesul, a sage who resided on the hill. Eesul discovered that Jaisal’s lineage could be traced back to the Yaduvanshi Rajput clan, claimed to be descendants of the ancient Yadus mentioned in the Rig Veda and the Hindu god Krishna himself. He then showed Jaisal a spring that was created by Krishna, and a rock on which the god had prophesised that a Yaduvanshi descendant would found his kingdom on that very hill. The prophecy was one of the key reasons for Jaisal to eventually build the fort on the hill, and the legendary rock remains within its walls. Also Read - Javelin Ace Neeraj Chopra Recommended For Rajiv Gandhi Khel Ratna by AFI, PT Usha Nominated for Dronacharya

The fort has three layers of walls

Moving back to the architecture of Jaisalmer Fort, one of the main reasons for the majesty of this fort is its use of three layers of walls. Solid stone blocks were used for the first lower layer to strengthen the foundation of the fort and reinforce the loose soil of the hill. The middle wall runs around the fort entirely and serves as the first defensive barrier. The third wall was the final barrier and was used by defending soldiers to throw massive boulders and pour boiling water and oil onto the invading forces who were caught in the middle of the second and third wall. While King Jetsi built 56 bastions around the fort to defend it, more were added in the subsequent centuries. Between 1633 and 1647, 92 of them were built. Today, Jaisalmer Fort has a total of 99 bastions. ALSO READ: Famous forts of Rajasthan that define splendor

It was attacked and captured by Allaudin Khilji

Despite its strategic location, Jaisalmer Fort has witnessed very few direct invasions by India’s many Muslim dynasties. One of the most prominent ones was the invasion by Allaudin Khilji, second ruler of the legendary Khilji dynasty. Allaudin Khilji is known for the successful defence of his Indian empire against the Mongols and his military prowess, and his famous attack on the kingdom of Chittor was immortalised in the epic poem Padmavat. Before that, though, he invaded Jaisalmer Fort. During the eight-year seize, the fort saw its first act of “Jauhar” or self-immolation by women in 1295 CE. When they realised that the fort’s loss was imminent, the women of the fort killed themselves to avoid capture or a worse fate at the hands of the invading forces. Allaudin Khilji would eventually capture and hold the fort for eight years.

The fort once witnessed a “half Jauhar”

Jaisalmer Fort has, as mentioned before, been witness to historic events, many of them tragic. But there is no event as tragic as the “half Jauhar” that happened under the reign of Rawal Lunkarna in 1530-51. Amir Ali, the chief of a local Afghan clan, was said to have attacked the fort. With the pretext of sending his wives to visit Jaisalmer’s queens, Amir Ali sent his warriors to infiltrate the fort. In the ensuing battle, Rawal Lunkarna lost his soldiers and felt that the fort would be lost to the invaders. With not enough time for funeral pyres, he decided to kill the women of the palace himself. In a cruel twist of fate, however, reinforcements arrived soon afterwards, thwarting the invaders and leading to a victory for Rawal Lunkarna. The tragic incident is referred to as the half-Jauhar of Jaisalmer Fort.