Desert state of Rajasthan seems to be the last place for vegetarians; however, its vegetarian recipes can rival the meat cuisines. 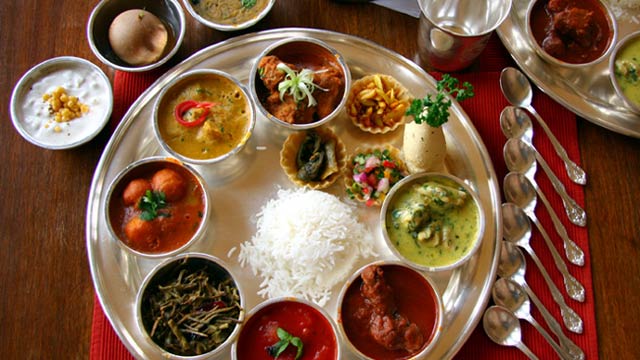 Rajasthan cuisine is a delightful mix of textures and tastes

Cooked in pure ghee, and fashioned from an innovative blend of ingredients, typical Rajasthani fare can often be a gustatory experiment that takes some getting used to. Also Read - Kriti Sanon Was Very Much in Relationship With Sushant Singh Rajput, Claims Lizaa Malik

From an analytical perspective, some of these dishes, which use desert berries, dry fruits, and regional spices in combination with particular kinds of pulses and flour, are testimony to the peoples ability to survive drought-like conditions in the arid land, as well as long sieges on forts in its more fertile areas. Also Read - AirAsia Announces Flights on Mumbai-Guwahati, Mumbai-Srinagar Routes From Tomorrow | All You Need to Know

Several of its foods can be stored for months on end, and many can be prepared and eaten without heating. Perhaps because of the scarcity of water, most Rajasthani dishes complement spice with sweetness.

Another consequence of the scarcity of water is the strange substitution of the more readily available but expensive ghee, clarified butter, milk and buttermilk in arid regions such as Jaisalmer, Barmer and Bikaner. Many of the foods borrowed from the cuisines of Punjab, Haryana, Sindh and Gujarat have been adapted to suit the agriculture and climate of Rajasthan.

The Rajasthani thaali comprises a serving of cereal-based food  usually bajre ki roti (made from millet), missi roti (made from gram and whole wheat) or rice  along with several gravies and sweets. 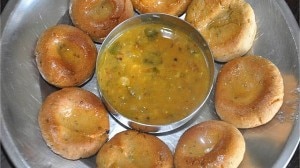 Aside from chapaati and puris, the main wheat-based dish in Rajasthan is dal-baati, a Marwari staple. Usually eaten with the sweet churma, this unique and rather filling preparation is a tandoori meal made from whole wheat. The wheat dumpling can be plain, but is usually stuffed with vegetables, and baked slowly over a coal fire. The side dish is made from urad dal and rajma beans, soaked in a gravy of tomatoes, onions and yoghurt. Both the dumpling and the dal taste strongly of ghee. The meal isnt quite complete unless its taken with churma, a delicacy made by crumbling nuts, sugar and ground wheat, and cooking them in ghee and jaggery.

Another popular lunchtime preparation is rabri. Eaten both hot and cold, it is made by mixing bajre ki roti in buttermilk and allowing it to ferment for a few hours. After the mixture is cooked, yoghurt is added, and the dish is garnished with jeera and onions. A sweet variant is also eaten as a cold dessert.

One of the most fascinating aspects of Rajasthani cuisine is the combination of seemingly incongruous ingredients to make gravy dishes. For instance, Jodhpur is famous for a spicy curry using, of all things, gulab jamun! If you walk into a shop that sells sweets and savouries in the city, and ask for gulab jamun, dont be surprised if the seller asks you whether you want it raw or cooked.

The gulab jamuns used for the sabzi are made by mixing flour with mashed potatoes, paneer and condiments such as cinnamon, garlic, ginger, cardamom, nutmeg, coriander powder and several shades of chilli powder. The gravy contains spices, onions, and tomatoes with a yoghurt base. It is cooked in ghee, and garnished with cashew nuts and a dollop of butter. A non-connoisseur could easily mistake the preparation for kadhi.

For the orthodox vegetarians, the traditional Rajasthani speciality gatte ki sabzi (made from gram flour  besan) is a great option, as it is prepared without using onions or garlic. The base here is yoghurt, and the gravy tastes mildly of tomatoes and spices. The gattas are rolled into long, thin tubes, and then cut down to pieces about two inches in length.

If youre looking for something light…

As the weather turns colder, the namkeen shops get busy making the hot snack, mirchi bada. Served either plain, or with bread in the same manner as Mumbais vada pav, the mirchi bada has a long chilli running through its core, and is stuffed with potato, sliced chillies and spices in besan. Slurp it up with chutney or tomato sauce!

For those who cant handle too much spice, boondi is the ideal snack. Available in both sweet and savoury form, these tiny balls of besan are often used to make raita. 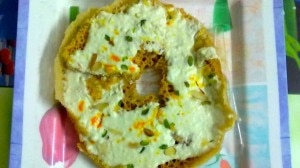 From mawa from Alwar to malpoa from Pushkar, every district of Rajasthan  including the desert region  has something sinfully coated in ghee and sugar to tempt the foodie.

Mawa is available in burfi and halwa form, with differences both in texture and taste. Several varieties of mawa can be bought in Jaipur, while Jodhpur is the place to taste dil khushaal, also known as dal badam chakki. Dil khushaal is made of almond, mawa and gram flour, with tons of ghee and sugar.

Gujia, which is rather similar to the pekadiya of Bihar, is a fried dumpling made from maida and stuffed with khoya, dry fruit, coconut and suji. It is pleated on the sides, and looks quite like the samosa.

As long as you have no cavities and no cholesterol problems, you should try imarti (also called jaangri in some parts of India), which resembles the jalebi in appearance. Made from urad dal and saffron, and swimming in sugar syrup, it was part of the royal thaali and is believed to have been offered to visiting Mughals by the Rajputs.

The signature sweet dish of Rajasthan is ghevar, the cream-coated crispy delicacy eaten by women to break their fast on Teej. The filigreed base, moulded such that the ends rise slightly to bank the sides and the hole in the centre, is filled with either malai or mawa, garnished with nuts, dry fruits and rose petals. Laapsi and sukhdi are wheat-flour based sweets, served at weddings.

Jhajhariya offers further evidence of the desert-dwellers ability to improvise when water and firewood are scarce. Made from corn, milk, dry fruits, and, of course, ghee and sugar, this sweet dish can be stored for months without refrigeration. The trickiest step is roasting the juicy corn in ghee till it turns dry. Once the preparation is complete, it can be served both hot and cold.

Rajbhog  The food of the kings 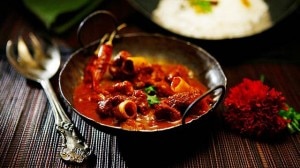 It is a tradition in Rajasthan that game animals and birds are cooked and eaten by hunting parties. And since royals went on shikar fairly often, wild boar, hare and fowl found their way to the Rajbhog.

Khud Khargosh, made of rabbit meat, was typically prepared during summer. The skinned animal would be stuffed with spices, enveloped in dough and soaked in layers of mud-soaked cloth, before being cooked.

From the Mughals, Rajputs adopted the technique of cooking meat in curd. Known as safed maans, it remains popular, especially among Western tourists. It is usually served with almonds, cashew nuts and coconut.

The Rajbhog also contains a soup and sweets. The soup is made of a yoghurt or milk base, flavoured with spices, and distinctive for its choices of vegetable  jackfruit, aubergine, and okra.

What you should NOT miss

Whatever gastronomic delights you indulge in, in Rajasthan, there are four dishes you shouldnt skip  ker sangri, kadhi, lassi and kulfi. 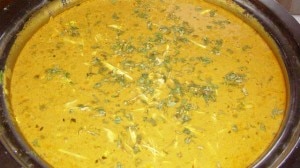 Ker sangri is possibly the tastiest dish one could conjure up from two ingredients  desert berries and beans. Apparently, a terrible famine struck Jaisalmer and Barmer hundreds of years ago, and these were the only two plants to survive it. Whats more, the people who stumbled upon them found that the spicy dish made out of these legumes went with just about everything, from rice to roti to yoghurt to pickle. Ker sangri is a staple at weddings even today.

Typical of the Marwar region, kadhi  locally known as khatta  is an essential component of most meals in a Rajasthani household. It sounds simple enough  besan dumplings in a yoghurt base. But the dumplings cant be defined by a single flavour  made as they are from several varieties of seeds (fenugreek, coriander, fennel and cumin), spices (ginger, cinnamon, chillies and cloves) and crushed curry leaves. This dish is best eaten hot with plain rice, to truly savour its taste. The Rajasthani version is different from the kadhi served in other parts of North India, and in Pakistan. Here, it tastes a little sweeter and thinner.

Punjab may stake its claim on lassi, but the sweet lassi of Rajasthan is a blessing in the unforgiving summer. The creamy saffron-flavoured version is popular in Jodhpur, and the more adventurous may want to opt for the bhang lassi or bhang thandai in Jaisalmer, which has a government authorised licensed shop that offers mild and medium versions for women, and medium and strong for men.

If youre on a diet, you may opt for chaas (buttermilk) instead, which doesnt have as much malai and contains salt instead of sugar.

The creamy kulfi of Jaipur is a must-have. If you dont care for sticky hands and a race against time to eat your melting kulfi in the hot sun, you should probably opt for thick wads of the dessert on a plate, rather than lick it off a stick. The fact that it is served on Palmyra palm leaves adds to its charm, and seemingly to its taste.

If you want a tasty souvenir from your trip, the ideal snack to carry back home to friends and family is aloo bhujia from Bikaner.