Delhiites plan to celebrate India's 70th year of independence in style, but flight fares from Delhi to popular tourist destinations like Rajasthan, Goa and Kerala are getting costlier and more people plan their getaways for the Independence Day long weekend. 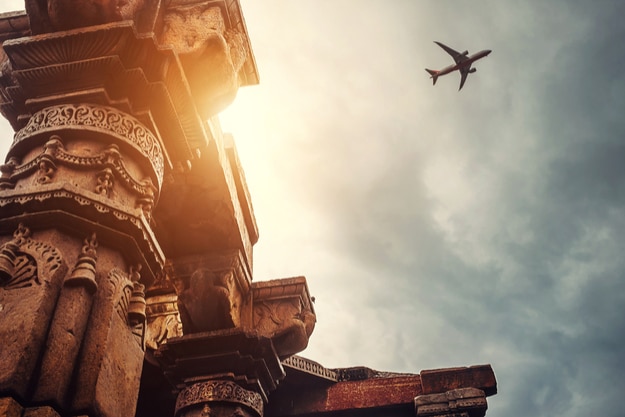 A flight passes over the pillars of the Qutb Minar temple complex in New Delhi, Photograph Courtesy: Shutterstock

India is celebrated the 70th year of its independence from the British this year on 15th August, a Tuesday. It would be a good idea to take the Monday off and club the weekend for a nice four-day holiday. And there are plenty of people doing just that, especially in Delhi. Folks from the capital city are rushing to plan out their long weekend getaway, and that’s causing prices to go up. The big destinations, like Rajasthan, Goa and Kerala, are getting costlier. Flight fares are on the rise from Delhi to these places, so book your tickets soon. ALSO READ: Top 8 Places To Visit in August 2017 in India
Also Read - Amid COVID-19 Lockdown, Kerala Govt to Issue Liquor Passes For People With 'Withdrawal Symptoms'

Let’s look at Goa; flight fares from Delhi are generally around the INR 3,000 mark, but they are now INR 9,000 for the long weekend. Flights from Delhi to Kochi also tend to cost between INR 3,500-4,000, but flights to God’s own country on 12th August start from INR 5,000, and return flights are INR 10,000-12,000 and higher. Flights to Jaipur, meanwhile, are relatively less expensive, ranging at around INR 1,500 from New Delhi and INR 2,500-3,000 for the return leg. Meanwhile, if you are headed for a mountain getaway from Kulu, Himachal Pradesh, you will have to shell out around INR 15,000 for a one-way flight; fares are generally around INR 7,000-8,000 for this route. Also Read - Back from The Brink of Death! 93-Year-Old Kerala Man Recovers From Coronavirus, Doctors Call it a 'Miracle'

Travel agents suggest that hotel rooms are also getting booked pretty fast. That could be a problem in places with fewer accommodation options, like Dharamsala or Kasol. This isn’t a new phenomenon by any means; flight fares and hotel prices tend to go up during such extended public weekends. Still, that doesn’t take away from the fact that it is going to get increasingly difficult and costlier to make your plans now that August has begun and we have just two weeks left to Independence Day. Needless to say, we do not suggest going for a spontaneous getaway; get your travel tickets and hotels booked beforehand instead of winging it. NOW READ: 7 offbeat places in India you must visit in August with your friends
Also Read - Coronavirus Kerala: 'Used Soap And Water,' Say Kerala Officials After Video Emerges of People Being 'Disinfected'

Mohit Gupta, chief operating officer at MakeMyTrip, said that airfare always tends to shoot up during long weekends because people book them months in advance. And if you, for some reason, decided to wait this long to make your bookings, there is hope still. Gupta expects more bookings to come up as the weekend gets closer, and he suggested that peak bookings will take place during the August 2-9 period. So you have a day to get things together and make your bookings.