If you are a frequent flyer, there is some great news for you! A flight passes over the pillars of the Qutb Minar temple complex in New Delhi, Photograph Courtesy: Shutterstock

According to an IATA report – 2017 was the safest year for aviation in terms of passenger fatalities – in more than a decade. More broadly, 2017 witnessed improvements in almost all of the key air transport safety metrics  both globally and in most regions.
According to the report released by International Air Transport Association – around 4.1 billion travelers in all flew on 41.8 million flights over the course of 2017. It was observed that there were no passenger fatalities on jet aircraft, and IATA member airlines experienced zero fatal accidents or hull losses on jet or turboprop aircraft in 2017. ALSO SEE Best Airlines for 2018 in India and The World, According to TripAdvisor Travellers Choice Awards Also Read - Plane Forced to Turn Around After Man Falsely Claims to Have Coronavirus, Arrested

A weekly chart from earlier this year put 2017s strong performance into context and underlined commercial aviations position as by far the safest mode of transport. The chart considered detailed data from the US between 2000 and 2009, and was compiled by one Ian Savage of Northwestern University. This is great news for globetrotters and business travelers as they find themselves spending a considerable amount of time flying. CHECK OUT 10 airline secrets air-hostesses dont ever tell you! Also Read - All Monday Flights Out of Hong Kong Cancelled Due to Protests

According to the statistics, commercial aviation had a fatality rate of just 0.07 per billion passenger miles. By contrast, the corresponding rate for cars was 7.3  which is around 100 times higher than commercial aviation  while the fatality rate for motorcycles was even higher still, more than 3,000 times that of aviation. All the fatality rates can be seen in the chart below: Also Read - Watch: Passenger Uses Feet to Swipe in-Flight Entertainment Options, Twitterati Find it Disturbing 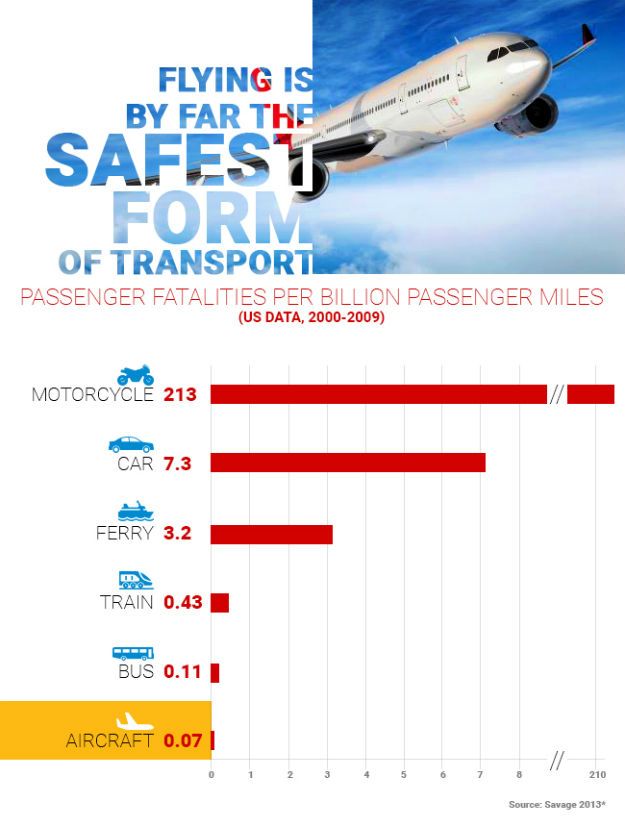 With air passenger demand forecast to grow by a healthy 6.0% in 2018, and passenger volumes expected to double over the next twenty years, safety remains the industrys #1 priority; committed to making what is already the safest form of transport even safer.