For the Bookworm Traveler: a New American Writers Museum in Chicago

Located in downtown Chicago, the American Writers Museum opened in May 2017 and showcases 500 years of US literary heritage. 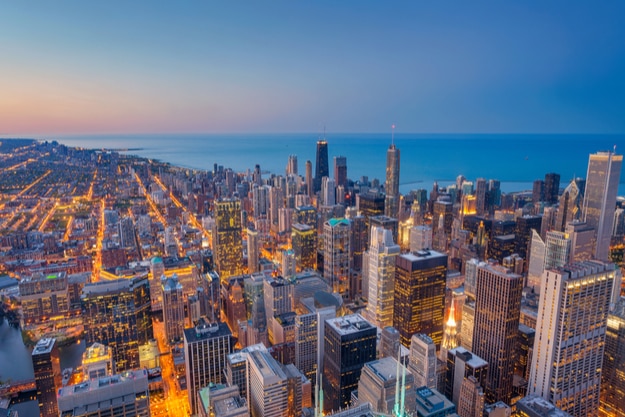 Twilight cityscape of Chicago downtown, where the American Writers Museum is located

For book lovers traveling to Chicago city, there’s a new museum that you definitely shouldn’t miss, dedicated to America’s celebrated contributions to the world of literature over the years. The American Writers Museum (AWM) lies in downtown Chicago, on the Magnificent Mile along North Michigan Avenue, and opened in May 2017. It was founded by Dr. Malcolm O’Hagan, an Irish immigrant now in his 70s who found a surprising lack of a national institute dedicated to American writers. The AWM aims to fill the gap, celebrating the works of authors and their gifts to the world. Here’s a quick look at what you can find at the American Writers Museum. ALSO READ: Here Are 4 Indian Museums Dedicated To Lesser-Known Freedom Fighters Also Read - Kim Kardashian Strikes a Pose in Silver Monokini With Her Four Kids on The Bahamas Beach

The American Writers Museum has an American Voices exhibit where you can find audio tours narrated by literature experts. The narrators include some noteworthy names, like Northwestern University profession Ivy Wilson and NPR book critic Maureen Corrigan. The works of a 100 prolific and iconic authors. Also Read - Pregnant US Teenager Strangled to Death, Unborn Baby Extracted From Womb

You can actually smell, hear and touch the literature

In a time of e-readers, iPhones and phablets, how do you capture the essence of 500 years of American literature? Through a bunch of touchscreens across museums and wall-mounted boxes that literally let you touch, smell and hear literary ephemera. For example, you can get the smell of fresh cookies for Julia Child or the woodlands for Walden. Also Read - Jussie Smollett charged with filing a false police report

Immerse yourself in the history of Chicago’s literature

The American Writers Museum is different from other literary museums in the US dedicated to specific local authors. Having said that, it does have a room dedicated to Chicago’s very own literary contributions. There are recordings of authors like Gwendolyn Brooks and Studs Terkel, and a digital map where you can find the locations of all the bookstores in Chicago, the birthplace of the original Ebony and Jet public library network, and more.

The anatomy of iconic books

The American Writers Association has an exhibition dedicated to the most iconic pieces of American literature. The Anatomy of a Masterwork takes a deep dive into how iconic titles like Huckleberry Finn and Sonny’s Blues were written and their influences, close readings, early manuscripts and critical reviews.

Collections of some really rare works

You’ll find touchscreens and digital versions of most literary works at the museum, but there are some things that need to be experienced in their original form. The American Writers Museum has Writer’s Room Gallery where a rotating collection of old literary works are on display. NOW READ: Breathtaking Museums in Goa for a Dose of History

With its multimedia installations and digital renderings, the American Writers Museum hopes to offer an experience of America’s literary history to a modern audience. It’s more than just a bunch of books under glass panels.