From the White Cliffs of Dover on the English Coastline

Anisha Jenyfer Solomon is a freelance writer and an enthusiastic traveler. Here, she pens down her experience visiting the mighty White Cliffs of Dover.

One fine day, we visited the scenic White Cliffs of Dover, dived into the history of its castle and walked at the coastline of the English Channel. The weather was perfect for a long walk, a trek or to simply sit by the beach. We boarded a bus to Dover, a one-and-a-half-hour ride from London. En-route we saw the picturesque English farms at length with cattle scattered over the never-ending grasslands. ALSO SEE 8 breathtaking photos of the most beautiful island in the world!

As much as we enjoy staying late in bed on most Saturday mornings, we made an exception for this one. Our day started at 5:30 a.m. and surprisingly we enjoyed the crisp London morning (struggle was real though!). By the time we reached, it was all warm and sunny. 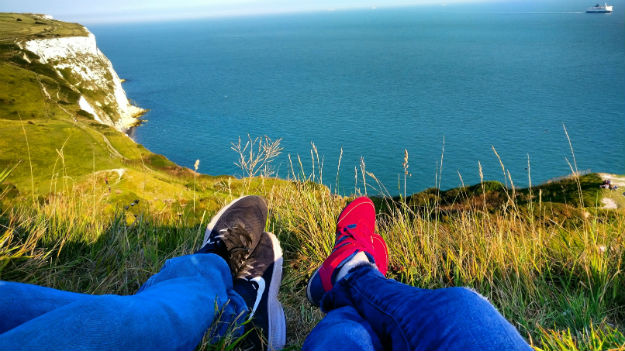 You can take a cab-ride or walk towards the Cliffs, which are not very far from the castle (though we would still recommend hiring a cab to preserve energy for the trek). You can walk length and breadth or you can choose to find your corner to relax and enjoy the mesmerizing views. In our case, we decided to do both (that may eventually lead you to the best spot). They say that you can see the edge of Western France from the far edge of the Cliffs, near the Lighthouse that stands at Southern Foreland on the Cliffs. It was built in Victorian design and restored in 1846. You can take a break to replenish your energy with a warm cup of tea at Mrs. Knotts Tea Room. 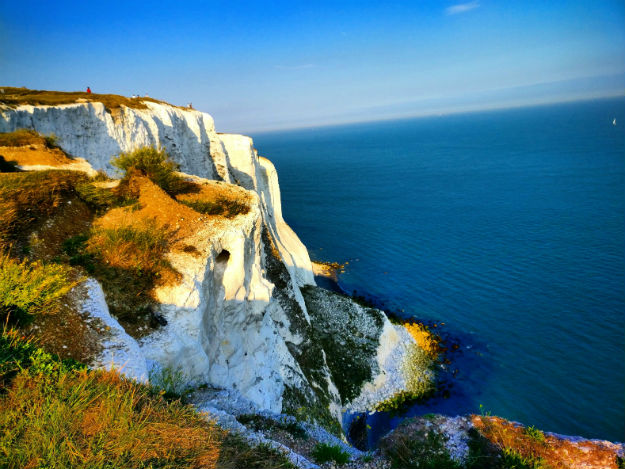 It was not our lucky day to admire France from afar due to sea mist or to relish English tea at the Lighthouse because of time constraint. But it was a pure delight to relax and gaze at the azure sky and let salty breeze tingle our skins. 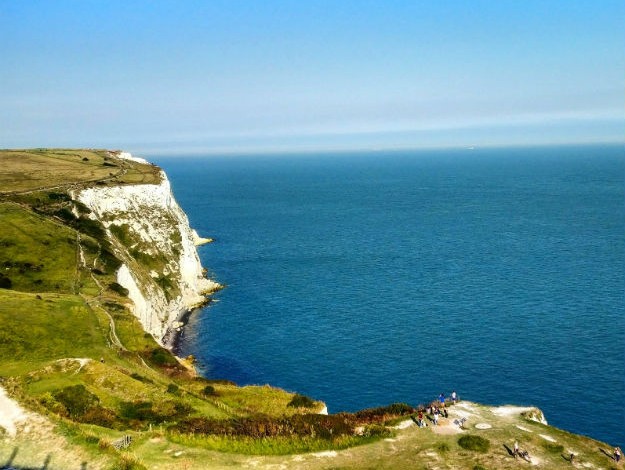 What is special about this place? White Cliffs gets the name because they are made of white limestone and closely resemble chalk (honestly, I thought that they could supply chalk to the entire series of schools in the UK and possibly beyond). On one side, you can see the never-ending blues of the English Channel and on the other, you will find thick green foliage, enough for you to take shade or lose yourself meandering around. The place is well-suited for a family day-out or a rendezvous with your beloved partner under the rare English sun. The place gets brownie points for being paw-friendly (pets are welcomed!). CHECK OUT 7 best clifftop hotels in the world with spectacular views 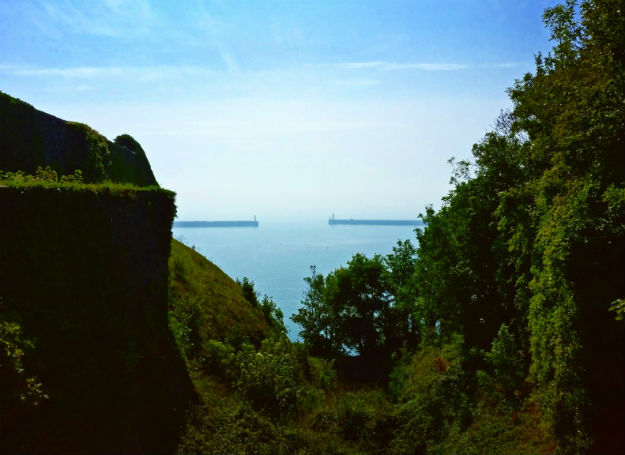 The allure of the White Cliffs is undeniable, but that is not the only thing to immerse yourself in Dover. The sight of the gushing blue waters would take your breath away, and make you want to keep rolling along the pebbly beach (you cant really leave footprints on pebbles). 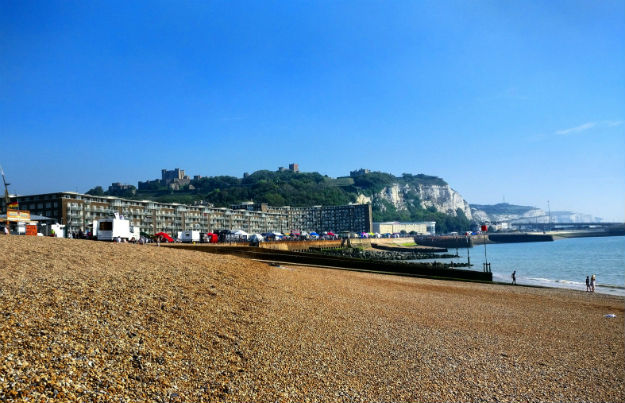 The beach is closer to where the bus leaves you in Dover. Therefore, we took a walk and began our exploration. The stroll would lead you to street vendors offering hot chocolate or pizza. That was motivation enough to settle and enjoy a pizza slice as we admired the view (we would suggest carrying a mat, because pebbles would not be gentle on your derriere). DO SEE 12 stunning photos of Ireland that will instantly calm you down!

We clicked some amazing shots of the sea, ships chasing fast waters and children playing on the beach (Instagram worthy!). Sat and played who can hit the bigger pebble first or whose pebble would go farthest. Saw people taking a swim and saying goodbye to the fading summer. 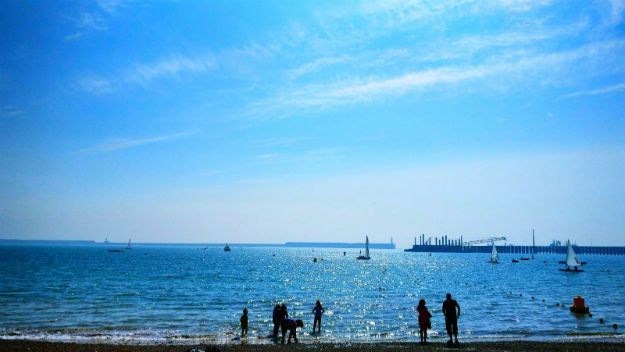 Sitting on the beach, we could see the famous and captivating Port of Dover, which sits closer to France than to London. The port holds important historical and political value. It served as an important gateway for Great Britains foreign trade. The port was created to prevent invasion from France and Spain. The history of this port dates back to the days of Romans when the Julius Caesar first arrived at Dove Port in 55 BC. 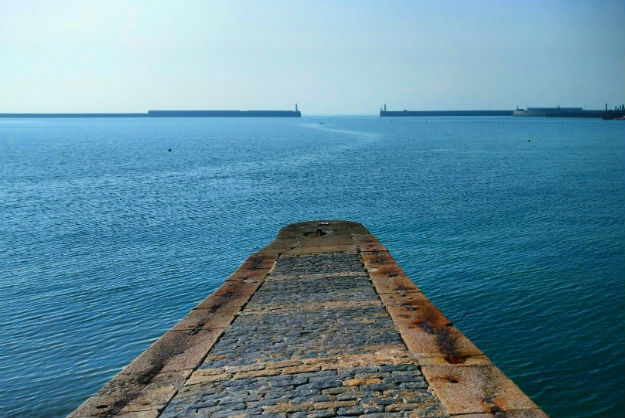 Till date, the port remains extremely well guarded. We were thrilled by the fact that the famous Dunkirk rescue mission departed and sailed from these very beaches of Dover to rescue 45,000 men. The rescue mission became the biggest evacuation of World War II. 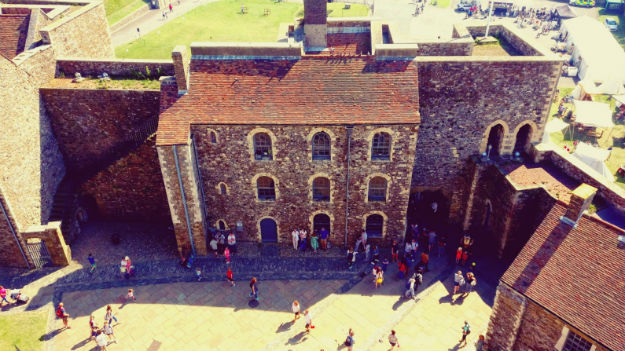 Eventually, we made our way to the Dover Castle. From the beach we continued our journey on foot. I must mention here that, like most castles, Dover Castle too stands on a hilltop, and the pleasant walk turned difficult as the curves turned steep. As fascinating as it was to enter history, the old stone steps made it difficult to enjoy. We tried hailing a cab but had no luck. Anyway, who gives up after coming that close so we raised our spirits till we entered the Castle gates, and by the first look itself, the effort seemed totally worth it! However, I would still recommend renting or taking your personal mode of conveyance because of the difficult climb (you still need to roam around in the castle grounds, right?). 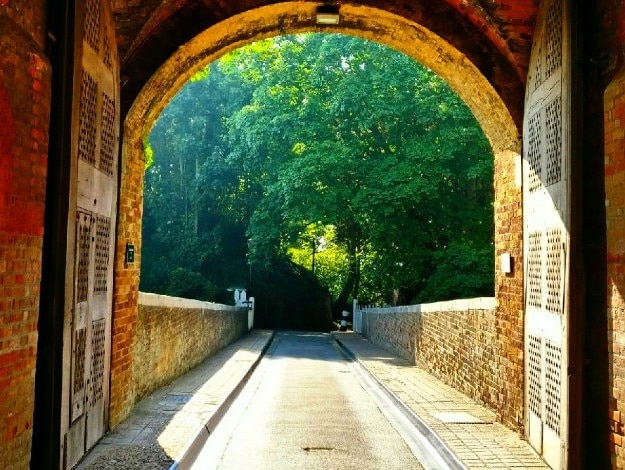 The Dover Castle is one of the biggest castles in the entire England. King Henry II earned credits for pouring grandeur in the stony walls, while making it mighty and impenetrable at the same time. It was developed as a strong military Castle. The fence was built along with many houses in the castle grounds (for the purpose of keeping more guards). The decision proved astoundingly wise in future as the Castle stood strong through the many invasions and wars it saw over the years. It was known as the Key to England because of its strong defensive position at the time of threat of an invasion. 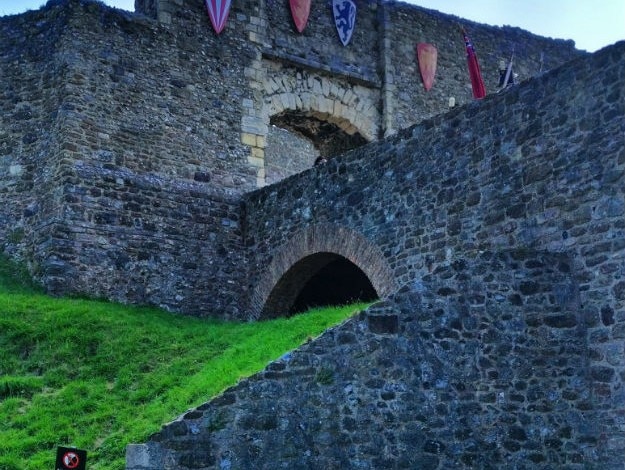 Game of Thrones lovers would find striking similarities in the history of the Dover Castle and Kings Landing. It is a beauty that needs to be absorbed with bare eyes. The roof of the Castle gives a splendid view of the vast acreage of the entire Castle, the Port and the city of Dover. 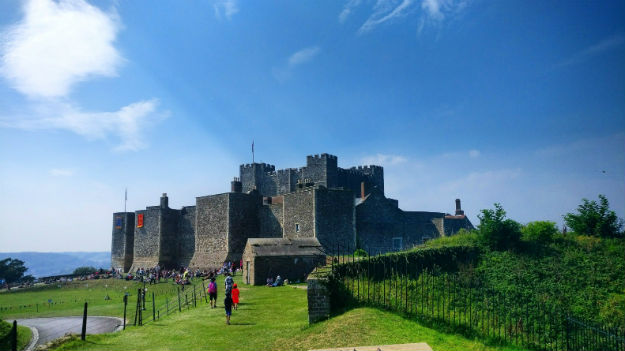 Speaking of enthralling history, you must visit the Roman Lighthouse, which was restored and well kept. The lighthouse stands within Castle grounds. It was built by Romans after they successfully invaded England in 43 AD. It served the purpose of carrying out trade successfully, helped guide shipping and extend control over the English Channel. The Lighthouse shares a fair amount of importance in the history of English trade because it was closest to the European mainland. What fascinated us the most about this place is that, it also happens to be the oldest building in England. 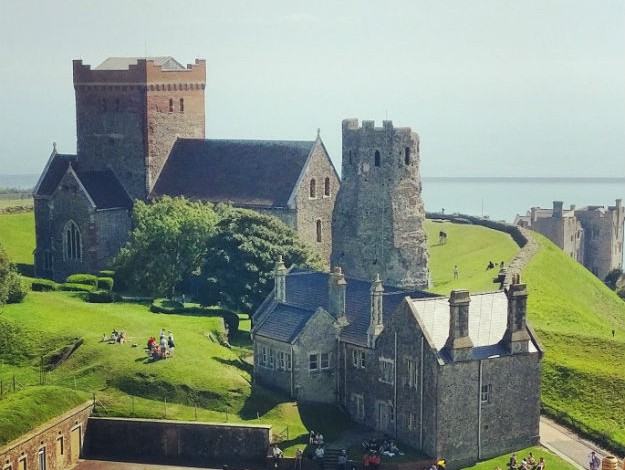 The Anglo-Saxon Church gets its fame from the famous murder conspiracy involving Canterbury Archbishop Thomas Becket by King Henry II. Back in the day, the Archbishop of Canterbury was slayed in front of the altar of this very Anglo-Saxon Church by King Henrys Knights in the year 1170. He was later granted Sainthood. At present, the large masses of believers flock here for pilgrimage every year. 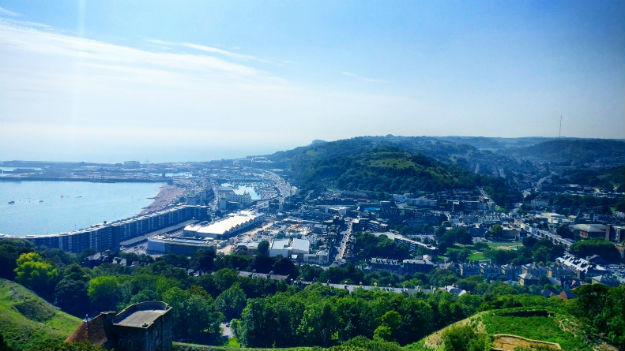 The mighty cliffs, salty sea breeze, swift winds toying with your hair and the gripping history. This place makes you fall in love with it. The excitement create an inevitable pull and the place remains on your bucket list, forever.