Ganesh Chaturthi 2017 Celebration in Chennai: Here is How Vinayak Chaturthi is Celebrated in Tamil Nadu’s Capital

Chennai is preparing for Ganesh Chaturthi as well, with idols of the god Vinayaka entering many people's homes. Here is a look at everything we know so far about Ganesh Chaturthi 2017 celebrations in Chennai. 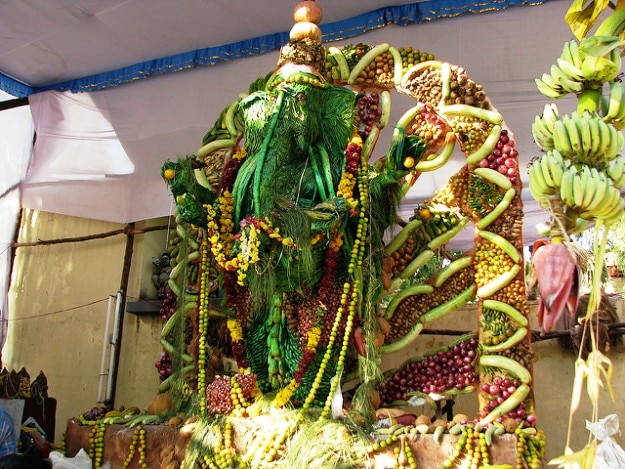 Hot, humid and full of life, the city of Chennai has its own way of celebrating Ganesh Chaturthi, which falls on August 25 this year. Citizens are already getting ready for the festival, which is also called Vinayak Chaturthi in Chennai. One of the biggest news this year is that the religious and cultural organization Hindu Munnani is planning to put up more than 5,500 idols of the god to celebrate the festival. Their biggest idol will be seen at Tiruvateeswaranpet, Triplicane, rising up to a height of 18 feet. That may not be much when compared to idols in, say, Mumbai or Hyderabad, but Ganesh Chaturthi celebrations in Chennai are a little more muted and private. ALSO READ: Ganesh Chaturthi 2017 Celebration in Hyderabad: Heres How the City of Nawabs Celebrates Ganesh Utsav Also Read - Fire Breaks Out in Chennai as People Burn Crackers in Response to PM's Call, No Deaths or Injuries Reported

The idols that are being set up across Chennai are, interestingly, going to feature specific themes. For instance, the idol in Alwarthirunagar is based on the fishing community, with Ganesh being portrayed as a fisherman. Others are made of traditional items like bamboo and the panchamritham, which is traditionally a combination of ghee, liquid jaggery, honey, yogurt and milk. Other creative ingredients that have been used include dates and traditional sweet dishes like laddoos, chikki and Mysore pa. Hindu Munnani’s idols, meanwhile, will be made of eco-friendly paper mache and natural colors, which is a positive step towards reducing the impact of Ganesh Chaturthi on the environment. The festival sees idols of the god Ganesh immersed in water bodies, and this takes a toll on the water and coastal ecosystem. Also Read - Viral: Police Dresses up as Coronavirus to Create Awareness in Chennai | Watch

In Krishnagiri district’s town of Hosur, celebrations of a different type are underway. Private students have been gifting small clay Ganesh idols to temples across town to celebrate Ganesh Chaturthi. The idols have a small seed in the tummy of the god, and the children have been campaigning against the immersion of Ganesh idols that could pollute local water bodies. The noble cause has seen them distribute up to 100 clay idols already, and is a welcome move to promote eco-friendly Ganesh Chaturthi celebrations in Tamil Nadu. Also Read - Trending News Today March 16, 2020: IIT-Madras Scholar Pretends to Have Coronavirus After Being 'Dared' by Friends, Let Off With A Strict Warning

Idols are not the only way that Chennaiites celebrate Ganesh Chaturthi. During the ten-day festival, you will find morning and evening prayers at homes and special songs being broadcast at Pandals. Special sweets called Modaks or Modagams will be available, along with Karinjis, which are similar to Modaks but have the shape of a crescent moon. Modaks are also called Kozhakattai in Chennai, and are essentially jaggery and rice flour dumplings. CHECK OUT: Ganesh Chaturthi 2017: Famous Ganesha Temples in Bengaluru That You Must Visit

A bigger debate is going on in the high court of Chennai to form government guidelines on installing idols during Ganesh Chaturthi and their immersion after ten days of celebrations. Many of the idols in the city continue to be made with PoP, which is more harmful for the environment.