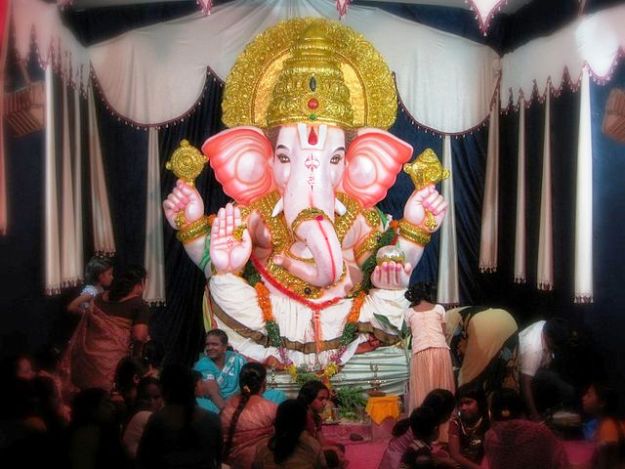 Hyderabad, the city of Nawabs, is one of the best places to catch Ganesh Chaturthi celebrations in India. While Maharashtra may be known for spearheading the festival and making it popular, Hyderabad certainly does not disappoint in the scale of its Ganesh Utsav festivities. The Ganesh Pandals in Hyderabad are some of the largest in the entire country, every single year. And the pomp and grandeur you see in this city are no less than what you can witness in, say, Mumbai or Pune. This year, you can already sense the celebratory mood in different parts of the city. Khairatabad, known for its massive Pandals, is not backing down this year. The 63rd Khairatabad Pandal will feature the tallest Ganesh idol in the city, and will be open to the public from August 24, 2017. ALSO READ: Ganesh Chaturthi 2017 Celebration in Mysore: Heres How Gowri Habba and Ganpati Festival Are Celebrated in Karnatakas Cultural Capital Also Read - Hyderabad-based Startup Launches COVID-19 Innovation Challenge For Students to Bring Potential Cure

How tall is the Khairatabad Ganesh idol? An incredible 57 feet, designed by 120 people from Machilipatnam and Adilabad. The idol is 40 tonnes, and it took three months to be built. For 2017, the Khairatabad Ganesh will get the Sheshnaag, the 14-headed snake god, in its backdrop. The laddoo to be featured on the idol will be designed to be as photorealistic as the original, famous laddoo of Tapeswaram. In Hindu scripture, Ganesh is famous for his love of sweets, especially laddoos. The Modak is a dumpling-like sweet in Maharashtra that is closely associated with the mythology of Ganesh. Also Read - Hyderabad: Man Accused in Honour-Killing Case of Dalit Christian Son-in-law Commits Suicide

The Khairatabad Pandal is expected to get devotees from Andhra Pradesh, Telangana, Karnataka and Maharashtra through the 11 days that it will stand. It has been a fixture in Hyderabad for every Ganesh Chaturthi since 1954, but organizers may be considering shortening the idol from the next year onwards. Nevertheless, families and devotees will still be seen streaming into Khairatabad and other Pandals across Hyderabad, despite the chaos, traffic jams and heavy security being planned everywhere. CHECK OUT: Ganesh Chaturthi 2017 Celebration in Bengaluru: Clay idols, Cultural Events and more in Karnatakas Capital City Also Read - Hyderabad Paan Vendor Arrested for Selling Weed Chocolates, Over 200 Flavours Seized

A big trend for Ganesh Chaturthi 2017 celebrations in Hyderabad will be the use of eco-friendly clay models instead of conventional PoP idols. There has been growing awareness among people about the ill effects of plastic Ganesh idols that are immersed in water bodies every year. The state government has formally requested citizens this year to opt for more environment-friendly clay, and is also distributing clay idols to push forward the Green Ganesha movement. Artificial ponds have been set up for the Ganpati Visarjan 11 days later, in order to reduce the impact of mass immersions at Husain Sagar Lake.