Bungee jumping isnt for the fainthearted, Harsha S discovers. But at Jumpin Heights in Rishikesh, theres a bunch of other things you can do too including watching others jump off ridiculous heig

Bungee jumping isnt for the fainthearted, Harsha S discovers. But at Jumpin Heights in Rishikesh, theres a bunch of other things you can do too including watching others jump off ridiculous heights live on a television screen!Also Read - 4 From Maharashtra Die on Way to Badrinath Dham as Car Falls Into Gorge in Uttarakhand's New Tehri 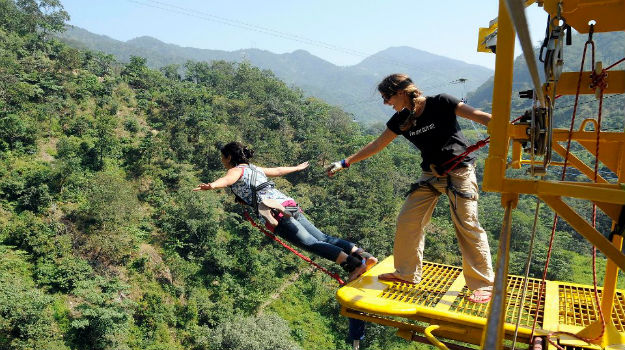 Rishikesh in Uttarakhand has firmly established itself as Indias adventure capital. From river rafting to bungee jumping name it and its there! Also Read - Woman Loses iPhone Worth Rs 65,000 in Rishikesh, Uttarakhand Police Helps Find It

That all these three happen to be run by the same company is perhaps just convenient! 🙂

So if its adrenaline rush youre looking for, Jumpin Heights at Rishikesh is the place to head to.

Founded by Rahul Nigam in 2008, the company began operations only two years later. Today, they boast of more than 10,000 jumps and are counting even as you are reading this.

Theres no way you can miss the place once you reach Tapovan, near the Lakshman Jhula in Rishikesh. The several hoardings will ensure you dont!

You could simply walk-in but you can also book online in advance to avoid standing in long queues during peak hours.

A shuttle will take you to the jump site in Mohan Chhati, some 15 km away from the offices.

You could choose from the three activitiesbungee jumping, the giant swing and the flying foxor opt for all three as a package deal.

Jumpin Heights has the highest jump height at 83 m (pictured below). That is as good (or bad) as jumping from a 21-storey building. 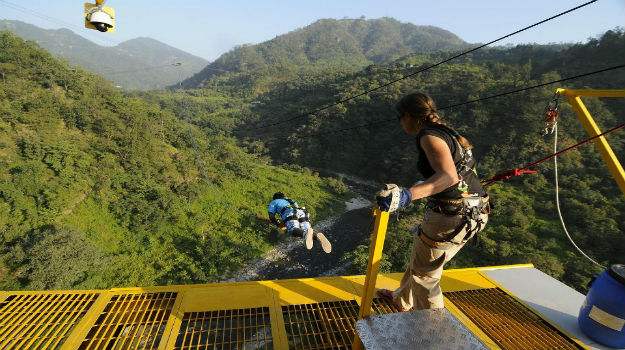 The Giant Swing (also at the same height, pictured below) involves one being harnessed from the chest to the hip and includes a free fall like a pendulum. 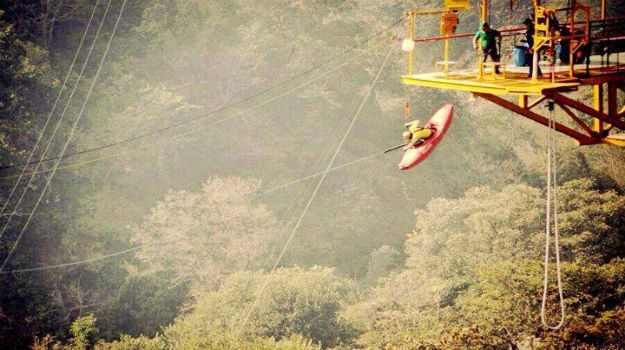 If free falling isnt your thing, the Flying Fox (pictured below) will have you zipping along a line from a height of 120 meters at the speed of up to 160 kph! Among those whove done the jumps are actors Rajeev Khandelwal and Parvesh Rana and Anand Kumar the former joint secretary in the Ministry of Tourism of the Government of India.

Jumpin Heights has been following the Australian and New Zealand Standards Authority Guidelines, and is now being included to form the Indian Standards.

All the essential equipment is imported and meets the necessary safety guidelines.

The jump platforms have been designed by experts from New Zealand and the jumps are supervised under the vigilant and experienced eyes.

All the staff has been trained in first aid by Indian Red Cross Society and it helps that theyre cheerful and encouraging.

Those who are assisting you with the jumps ensure they lighten up the mood so as to soothe your nerves before you take the plunge. 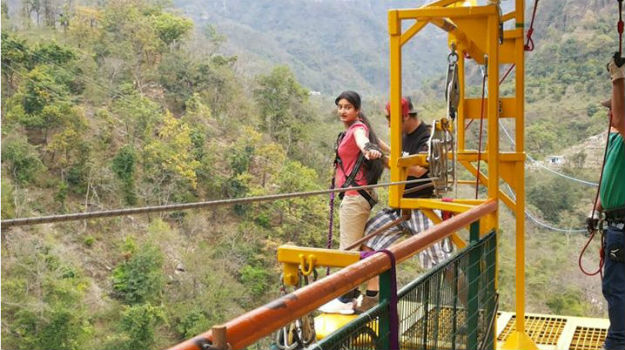 For those who have found themselves being dragged unwillingly by their friends and partners there is also a cafe from where you can watch others jump, swing and fly on a television screen in real time.

This too makes for a good viewing.

The eager ones flex their muscles and give the camera thumbs-up.

Some others cross their heart, knowing now they cannot escape it now.

No reality show on television comes close to this viewing! 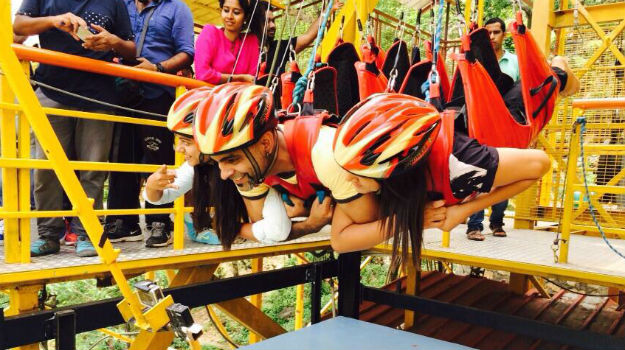 The adrenaline rush aside, the jump comes with some stunning views; the platform itself offers panoramic views of Rishikesh and you jump into the valley where the beautiful River Hiual, a tributary of the Ganga flows. There are no words to describe what you see when youre standing on that platform.

However, if the views arent enough to take back home, you could also shop for mementos at the companys store and buy a DVD of your jump to show off on Facebook!

What you need to know:

Those who are pregnant or suffer from epilepsy, heart problems, backaches, spondylitis, recent fractures or high blood pressure cannot attempt these activities.

And all jumpers must fill an indemnity waiver while registering.

But dont let the legalese come in your way of undertaking these activities. The thrill that you will when attempting a jump is like no other.

Most walk away feeling exhilarated and wanting more! Some even conquer their fear of heights!

So what are you waiting for?!

How to get to Rishikesh from New Delhi