The new motorcycle mode will make it a lot easier for bikers to get to their destination. 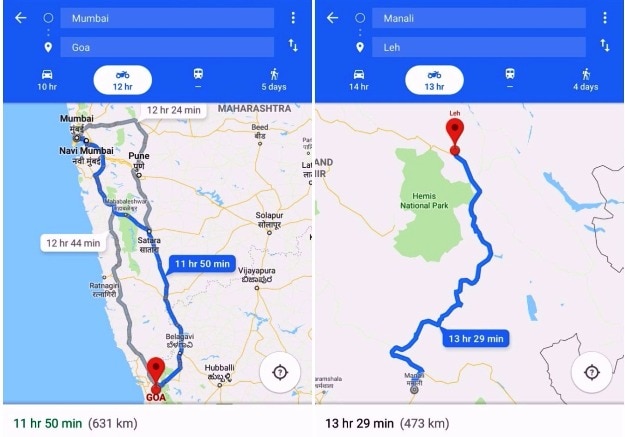 It is far from perfect, but Google Maps is a lifeline for two-wheeled travellers exploring India. This vast country of ours has many roads, some of which are restricted to bikes, and some of which are just the right size for them. And Google has taken one more step towards making its Maps better for bikers by including the Motorcycle Mode. The new version 9.67.1 of the Google Maps app, available on the Google Play Store for Android apps, has made its way to the phones of countless travelers today. It comes with a new two-wheeler alternative in addition to the existing modes of travel: train, foot and car. ALSO READ: This woman quit her office job to cycle the longest bike ride in the world Also Read - Kanyakumari To Leh in 5 Days: Story of Two Women's Bike Trip in 129 Hours Will Awaken the Adventurer In You

With this new mode, announced earlier today by Google, bikers will get customized voice guidance and route navigation to get to their destination of choice. According to Google, this is an ‘India-first’ feature. And it is a move that is just right for a country like India, where you can sometimes find highways where bikes are not allowed. Before this new feature, you just had to be careful of entering a restricted highway or freeway and it would then be a challenge to find another route. Also Read - Shah Rukh Khan and Salman Khan enjoy bike ride together!

The launch of Google Maps’ motorcycle mode in India also makes sense because there is a substantial number of travelers in this country that use two-wheelers. There are commuters who make their way from home to office and back everyday on their trusted bikes and weekend travelers who head to the highways for a Saturday or Sunday morning ride. And there are the more passionate adventurers who take their bikes to the end of the road in every corner of the country. NOW READ: Top 10 bike trips in India every motorcycle lover must take

At the event in New Delhi, Google iterated the fact that India is the biggest market for two-wheelers in the world, and many of its roads are just wide enough to fit bikes and scooters. Around 70 percent of registered vehicles in the country are two-wheelers.