Gudi Padwa 2016: 5 Gudi Padwa rituals and what they mean

Gudi Padwa celebrates the onset of spring and the beginning of the New Year in Maharashtra. Here are five Gudi Padwa rituals and what they mean. Several of us in Maharashtra celebrate Gudi Padwa. The day that celebrates the beginning of the New Year is marked by several rituals. While we may not know it, each of these has a special significance. (ALSO READ How Gudi Padwa is celebrated in Maharashtra) Did you know, for instance, the reason why a gudi is erected or rangolis drawn? Read on to find out more! Here are five of the most important rituals associated with Gudi Padwa and this is what they signify (DON’T MISS More stories on Festivals and Celebrations) Also Read - India-China Ladakh Standoff: 'Situation Stable And Controllable, All Channels Open For Talks,' Says Beijing

1. The Abhyanga Snana or the Holy Bath

India, unlike several western countries that have a temperate climate, is a tropical country. And so unlike in the West, a bath becomes a very important part of any given day. The abhyanga snana or the holy bath is an elaborate affair. Traditionally, people massage oil before using uttan (sandalwood powder) to bathe themselves. A bath/shower is traditionally associated with cleansing of the body and indeed the soul. It isn’t unusual for people having access to clean rivers and ponds to have their bath in the open and pay their respects to the sun. The idea of having the abhyanga snana before sunrise is that you should be clean and ready to welcome the sun. Also Read - Style Tips to Wear Mom Jeans: How to Look Cool Wearing 'Unhip' Denim at Any Occasion

Derived from the Sanskrit word rangavalli, the art form of Rangoli predates sculpting and painting. Traditionally these colorful patterns are drawn outside homes or in courtyards of houses. Rangolis are typically geometric patterns drawn on the floor. The patterns are believed to manifest themselves into vibrations in the observer’s mind and have a calming effect. Traditional Hindu beliefs suggest that Rangolis also ward off negative energies and attract good luck.

Gudi Padwa marks the beginning of spring. With spring arrive fresh blossoms and tropical flowers of all colors and fragrances. Flowers, in any culture, have come to be associated with good luck and best wishes. With spring, flowers are readily accessible and are easiest and the best form of decorating one’s home. Various flowers signify various things but in general they symbolize purity and spread positive energy. 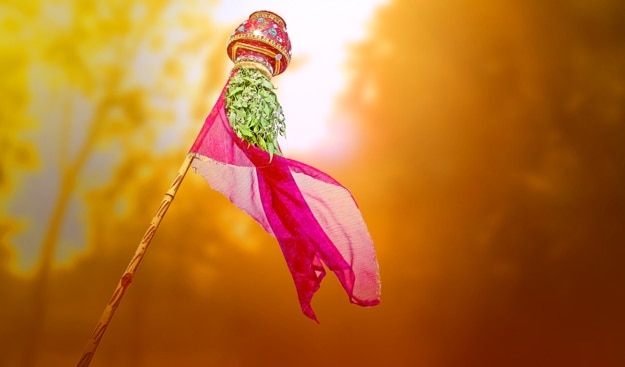 The gudi itself is a wooden staff covered with a yellow or saffron cloth, twigs of neem and mango leaves and an upturned metal pot. It serves as a flag of sorts. The Maratha king Shivaji hoisted gudis atop forts at the end of every major victory. It is thus not unusual to also find saffron flags being hoisted on the day of Gudi Padwa. The Gudi has to be positioned to the right of the house and must be displayed in such a manner that it is visible from afar too.

As with all festivals, there are a lot of sweet preparations made during Gudi Padwa. (ALSO READ Traditional recipes of Gudi Padwa: Pruanpoli, Basundi, Lapshi and more) but the prasad itself is unique in that it is a mix of neem and jaggery. The combination of bitter and sweet is said to symbolize the journey of life itself, which can never be complete without a healthy mix of sorrow and joy.

Did we miss on any more? Have something to add to this story? Post your comments in the discussion board below; we will be thrilled to hear from you!