Guess where Shah Rukh Khan brought in his 51st birthday!

SRK has let go of his usual ritual of meeting media and fans at Mannat this year.

It is a huge day for Bollywood lovers today. Why, you ask? It’s because today is the day India’s biggest superstar was born. You cannot be a Bollywood fan and not be in love with the man who redefined romance on the big screen. Yes, we are speaking of none other than the Baadshah of Bollywood. Shah Rukh Khan turns 51 today. As usual, his home Mannat located in Bandra was thronged by his fans since yesterday with a huge number of people eagerly waiting for their idol to show up so that they could catch a glimpse of him and shout out their wishes. Usually, SRK meets the media and his fans at Mannat on his birthday but this year, King Khan had other plans. Shah Rukh Khan brought in his 51st birthday at the Alibaug beach on the outskirts of Mumbai. (ALSO SEE 11 travel lessons from Shah Rukh Khan) Also Read - IOA President Narinder Batra Says Postponed Olympic Qualifiers Will Happen, Asks NSFs to Share Athletes' Training Plans

Reports say that SRK’s birthday party was attended by his close pals Karan Johar and Ranbir Kapoor who are basking in the glory of their latest release Ae Dil Hai Mushkil. Also present was Sanjay Kapoor with his daughter Shanaya, who coincidentally shares her birthday with the Baadshah. Sanjay even posted this photo on Instagram wishing the two Scorpions. Also Read - To Fight COVID-19, PM Modi Launches 'CARES Fund', Urges Citizens to Donate 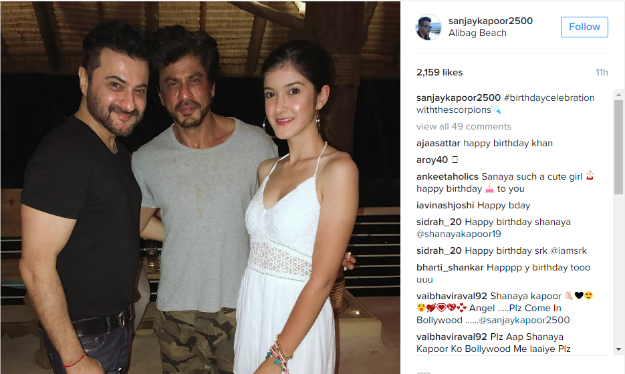 Also Read - Earth Hour 2020: Rohit Sharma Wants Citizens to do Their Bit For The Planet on Saturday

While this may be a huge disappointment for the fans waiting outside Mannat, it is good to see that SRK is partying as always. He is known to celebrate big occasions like his birthday and Eid with great pomp. This year, Alibaug gets to be the lucky spot that will witness the shenanigans. Alibaug is one of Mumbai’s most popular getaways located just around 95 km from the city. It is known for its vast clean beach and surrounding country landscape. It is an ideal do-nothing spot for vacationers. No wonder SRK has chosen this destination away from the city for his 51st birthday party.

Wish you a very happy birthday Shah Rukh! Thank you for entertaining us all these years. We wish you good health and many more parties at exotic locations!