Happy Birthday Jacqueline Fernandez: Stunning Photos of the A Gentleman Actress from Her Brithday Trip in Tokyo

Actor and model Jacqueline Fernandez is currently in the Japanese capital to welcome her birthday. And these photos of her drifting in Tokyo in bliss are what any birthday vacation in a big city should be like. 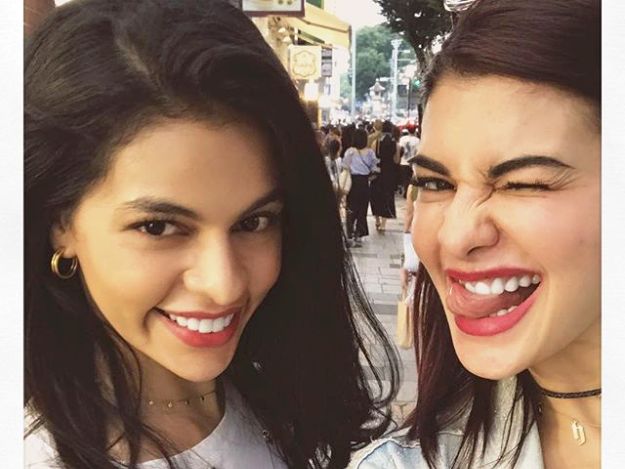 The beautiful and full-of-life Sri Lankan Bollywood actor Jacqueline Fernandez, known for her roles in sequels like Race 2, Houseful 2 and Murder 2, is now in Tokyo to ring in her 32nd birthday. Tokyo is a fast-paced, eclectic mix of ancient past and the far future, and Miss Fernandez seems like a perfect fit in the city. This city, like Fernandez herself, is fun, energetic and constantly moving forward. It has everything you would need in a birthday getaway to a big city; a thriving cosmopolitan food scene with multiple Michelin star restaurants (more than any other city in the world, in fact). Its cuisine is also an Intangible Cultural Heritage, according to UNESCO. ALSO READ: You wont believe how Jacqueline Fernandez celebrated Christmas (VIEW PICS) Also Read - Sona Mohapatra Saddened With Jacqueline Fernandez, Taapsee Pannu, Bhumi Pednekar's lip-Syncing to Her Songs

Jacqueline Fernandez heads for Tokyo with friend Mishali Sanghani, but doesn’t leave her mischief behind!

The duo land at Tokyo, and their smiles suggest they may be up to no good!

Jacqueline Fernandez plays hide-and-seek in the crowds of Tokyo

Here she is in the luxury hotel Aman Toyko, reading a newspaper with mischief in her mind

And when Miss Fernandez is not exploring Tokyo’s rich gastronomic culture, there is its history, deep and awe-inspiring that she can explore. Once called Edo, Tokyo was the capital of the Tokugawa Shogunate for centuries until the bloody Meiji Restoration. In the midst of towering modern skyscrapers and visions of the future, you can still find traces of old Edo here, like the Tokyo Imperial Palace and the Sens?-ji Temple in historic Asakusa. Here’s hoping that Jacqueline Fernandez gets to visit such gems like the Tokyo National Museum, the Meiji Shrine and the National Museum of Western Art in her time there. NOW SEE: Jacqueline Fernandez swims with a whale shark in Maldives!

Here she in Austria for a quick escape

Jacqueline Fernandez at the iconic Salzburg Cathedral in the country

And here she is walking down the streets of New York

Jacqueline Fernandez is will next be seen in the film A Gentleman with Sidharth Malhotra, which was shot in gorgeous destinations in Goa, Bangkok and Miami, Florida. She also has Judwaa 2 coming up with Varun Dhawan and Taapsee Pannu, shot extensively in the beautiful, scenic countryside of England. Both movies are sequels too.