For a summery Christmas instead of a cold and chilly one, you can visit these countries. 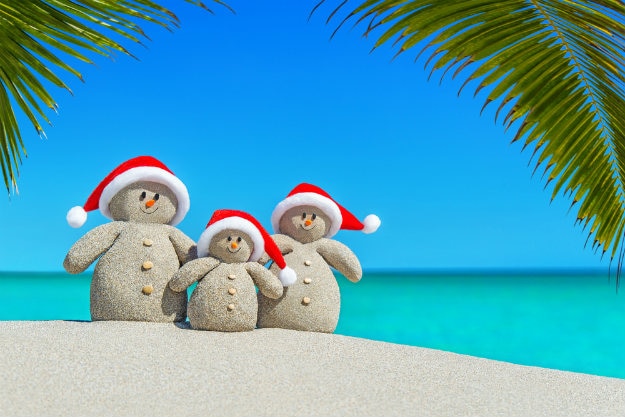 While most parts of the world expect to see a white Christmas or at least a pleasant one with slight winter chills, there are countries that celebrate Christmas in the summer. This is because, unlike other countries, they are on the other side of the hemisphere, southern to be precise and therefore, they have summer season on instead of winter. So if you want to have a summery Christmas, visit any of these countries.

Australia falls in the southern hemisphere which means, its winter is in June-July while December-January is peak summer season. The celebrations on December 25 are outdoors thanks to the great, sunny weather and people dress up in breezy, summery dresses to enjoy a day out. The menu includes traditional Christmas treats as well as barbeque as many people host one in their lawn or backyard with their loved ones. Since Australia also has a number of beaches, many hit the beach to get a tan or surf. You will even find a Santa on some beaches who gives out treats to children. Australian homes may not necessarily have a Christmas tree but you will find flower decorations thanks to the wonderful bloom during this time of the year. Many outdoor events are also organized for people to get together and celebrate the festival.

Since New Zealand is Australia’s neighboring country, Christmas here falls in the summer season. Children have school holidays and it is a public holiday for working adults. Many prefer going to the beach and camping there to ring in the festival while others have a celebration at home. Carol services take place everywhere in New Zealand and in bigger towns and cities, there are parades where you can spot Santa as well. New Zealand has its own special carols and people sing these in many places. People gather before lunch to open Christmas presents together. Barbeque is another fun ritual of Christmas in New Zealand that includes meat as well as fresh vegetables of the season. Big helpings of desserts bring a festive end to the Christmas celebrations in NZ.

Bolivia is a country in South America and due to its location, it is summertime here during Christmas. Most people here are Christians and they celebrate the festival all the way up to January 6 which is Epiphany. Many even exchange gifts during this time instead of on December 25. A Christmas tree isn’t very common in Bolivia but people often burst crackers after the midnight mass. Their traditional meal consists of stew with chicken, pork or lamb, tropical fruits, salad, corn, potato and roast beef or pork. Many poor people tend to work on this festive day to earn extra wages. You will find Nativity Scenes outside churches.

South Africa is also in the southern hemisphere and so, it is summer during Christmas. Carol singing is a big part of the celebrations and so is the Christmas feast. Fir trees are used for decoration outside houses and children leave stockings to get gifts from Santa. Being summer, flowers are in bloom and people love to be outside in case it isn’t too hot. Bursting crackers, eating roast turkey or beef with yellow rice and raisins and then enjoying a serving of Christmas pudding is part of the festive tradition. They even opt for a barbeque at times.

Warm weather welcomes Christmas in Argentina. Any tree is decorated as a Christmas tree here and people often put cotton balls to depict snowfall as it does not snow during this time of the year. Argentina has a large Catholic population and therefore most people go to attend midnight mass. Bursting crackers is common here and people eat a hearty dinner too consisting of turkey or roast beef. Some also follow a tradition of staying awake on Christmas eve talking to friends and family and then sleeping for the most part of the next day. Nativity scene decoration is also big in Argentina and so is the celebration that begins early December as many also celebrate Advent.

An island in Africa, Madagascar is another place that experiences a warm Christmas. Even so, people make it look like it is winter with their decoration that includes holly, snow, robins and more. The people are in a cheery mood and they celebrate by going to church, enjoying time with their family and eating Christmas meal. There are small performances by children in the church and people exchange small presents with each other. The church also gives out sweets to the people for the celebration. The greetings are in their official language which is Malagasy. Christmas carols are also sung in their native language. French lychees are popular here and people eat them for Christmas along with a meal of chicken, pork and rice and a special Christmas cake.

Since all these countries do not get to experience a white Christmas, many of them also have some Christmas events in the month of July which is winters for them. This is just to have a winter Christmas experience like other countries.