Hornbill festival: 10 things you should know about Nagaland’s biggest festival

Nagaland’s biggest festival begins today. Hornbill Festival that will go on till December 10 is one of the most eagerly-awaited festivals in the state. With all major tribes participating in the festivities, Hornbill has become an important festival in India’s cultural calendar. Last year, it even received the Prime Minister’s stamp of approval when Narendra Modi became the first Indian head of state to attend it. And so as the festivities of the 2015 edition of the Hornbill Festival begin today, here are 10 things you should know about Nagaland’s biggest festival.

1. Kohima is not the venue of the Hornbill Festival 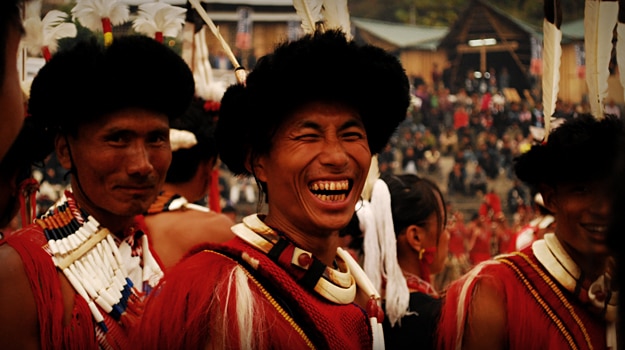 While Kohima is the capital of Nagaland, the main venue of the Hornbill Festival is the Naga Heritage Village, Kisama, some 12 km south of Kohima. Kisama is an open-air museum that showcases various aspects of Naga life — from homes to morungs (or bachelor dormitories) — Kisama offers a fascinating insight into the life and culture of the various Naga tribes. The festival itself is organized with the aim to protect and showcase the diverse cultures and traditions of Nagaland. 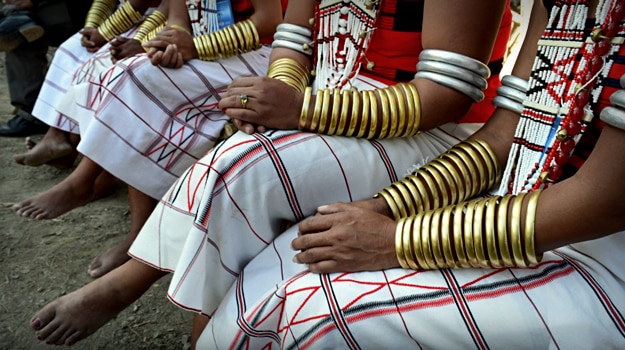 The gates represent the 16 major tribes, which form the majority of Nagaland’s population. Constructed at great costs to the exchequer, each gate is distinct and individualized with motifs of the respective tribes. 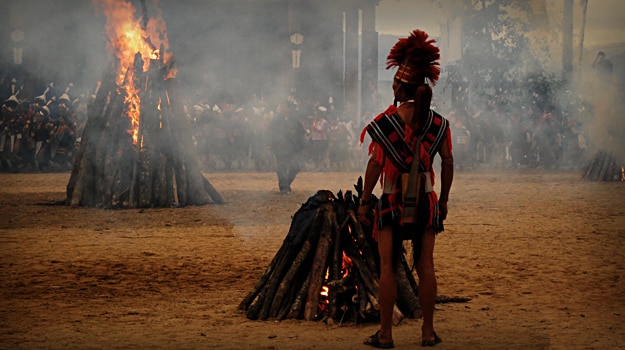 This comes as a surprise to many, but Nagaland is a dry state. The folks in Nagaland take consumption of alcohol very seriously and the Assam Rifles often apprehends liters and liters of the contraband stuff with shocking regularity. This time around the authorities have warned that a Special Task Force will conduct stringent checks at the venues to prevent infiltration of Indian-Made-Foreign Liquor. We know the music, the festivities and the chilly weather really do beg for a peg or three of the good stuff, but good luck trying to get it, officially.

4. And the venue has been declared a No plastic zone’. 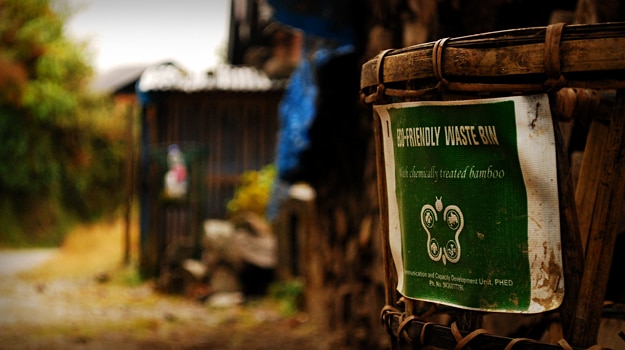 You know, just in case you thought you could sneak in half a dozen sachets in your cargo pockets.

5. But hey, you can have as many chillies as you want (or pork for that matter). 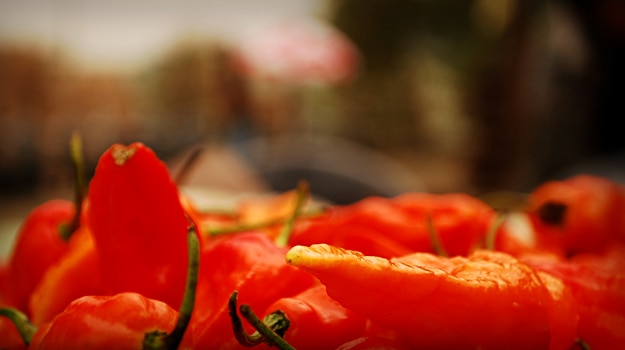 Nagaland is home to some of the spiciest chillies in the world and the organizers of the Hornbill festival take great pleasure in making participants cry. One of the most popular competitions during the festival is one that involves eating chillies. Brave participants, including soldiers and officers of the Assam Rifles, queue up to eat as many as they can, literally weeping even as they try to out do the other. It will be held on December 10 at 2 pm. The pork-eating competition is the other more popular event in the festival and one that is more delectable and doesn’t make its participants cry out in pain! 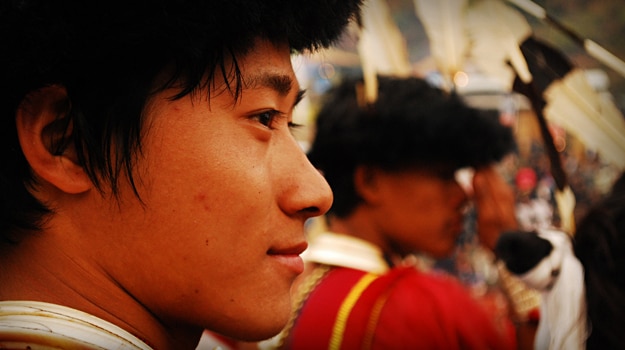 Photograph courtesy: Supriya Sehgal/Creative CommonsLast year, Nagaland hosted some 170,000 tourists for the duration of the Hornbill Festival. This year the numbers are expected to rise. The quality of roads to Kohima and Kisama have gotten better, but they continue to be narrow. Traffic jams are a part of everyday life in Kohima but expect them to get worse for the duration of the festival.

7. The festival is named after the Indian hornbill. But it isn’t even the state bird! 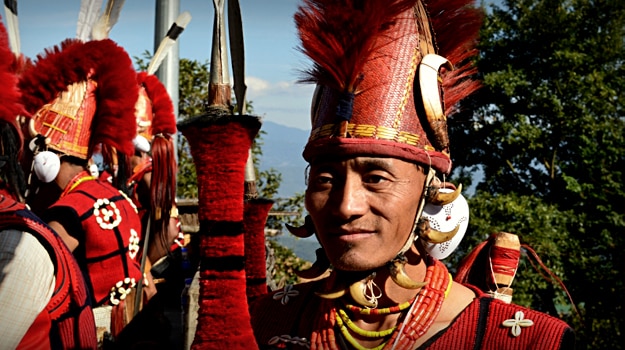 Blyth’s tragopan, an endangered spice of the pheasant, is Nagaland’s state bird. By some estimates, Dzukou valley in Nagaland is home to 1,000 of the 2500-odd tragopans in the world. The Indian Hornbill, however, is part of the folklore of almost all tribes of Nagaland.

8. Expect international bands to set the stage on fire. 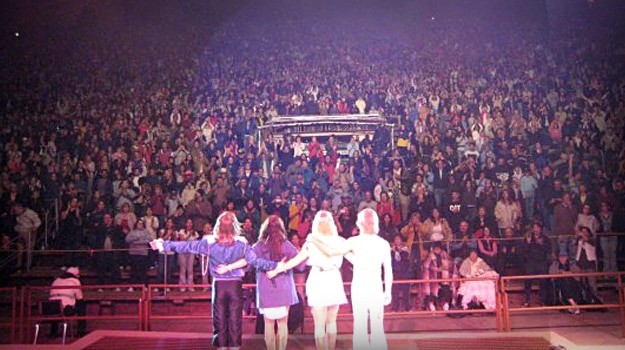 Photograph courtesy: The Music of ABBA

There is Arrival-ABBA that is flying down from Sweden and will perform cover versions of ABBA numbers. The Swedish band has toured over 35 countries and has appeared on television and radio shows all over the world. But the headliner for thus year’s Hornbill music festival is the German power metal band Helloween. Helloween will be live on December 7 at the Indira Gandhi Stadium and Hockey Ground in Kohima.

ALSO SEE Everything you need to know about the Hornbill Festival

9. Or just watch men fling each other to the ground. 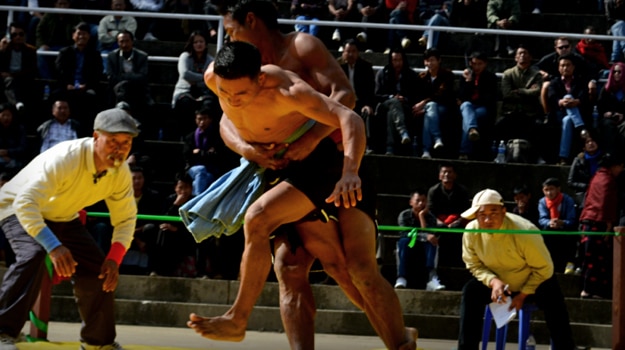 Naga wrestling competition is yet another favorite. So if gastronomy and music aren’t your things, do consider this. Of course, this isn’t anywhere close to the blood sport you may be expecting, but it certainly is something you wouldn’t normally get to watch.

10. Narendra Modi has given it two thumbs up. 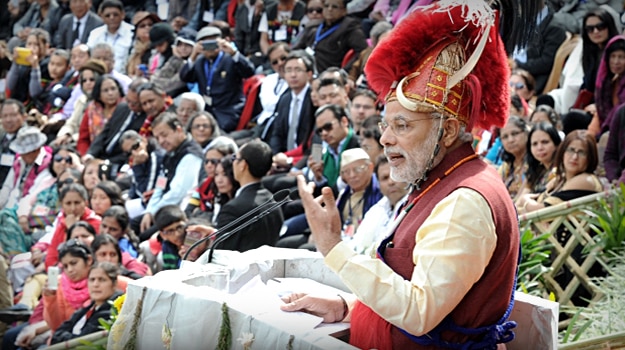 When he attended it last year, Narendra Modi got so much in the mood of things he went the whole hog and delivered an entire speech wearing that headdress. If the Hornbill Festival is good enough for the Prime Minister of India, surely it is good enough for you.